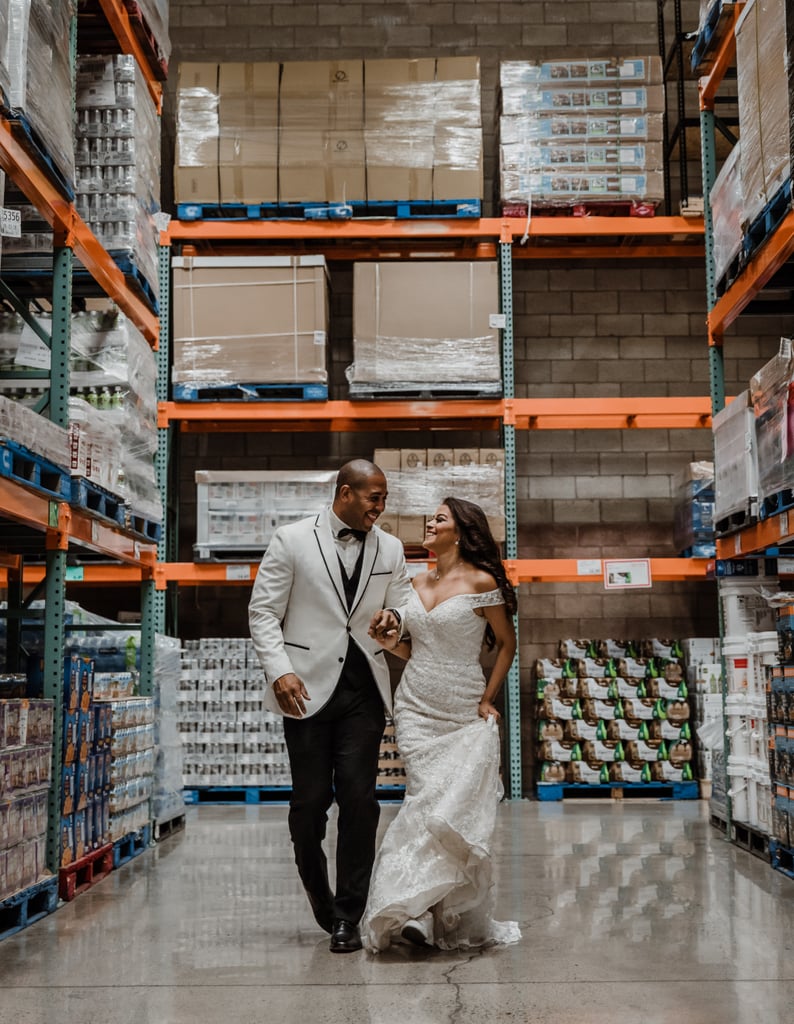 Jessica Ayala Brown met her husband Brandon at their local Costco, so it only made sense to snap their wedding photos there a few years later — and they turned out to be "cheesy" in the best way possible.

During a shopping trip to her local Costco in Waipahu, HA, a few years back, Jessica stopped by the mac 'n' cheese aisle, contemplating whether she should indulge her craving for the cheesy treat. "I was saying how I wish it was good for you!" Jessica said, according to a Costco Facebook post. Brandon, then a stranger who'd overheard Jessica, said, "It's good for you. It's cheese — and it's Costco," and the rest is pretty much history.

In July 2018, the couple, who was dating at the time, took a trip to Costco and Jessica snapped a picture of Brandon reaching for a box of mac 'n' cheese, captioning it, "Sometimes I️ take him back to where it all started . . . so he knows I️ can return him if he acts up #NoReceipt." That night, Brandon proposed.

"It was actually a joke the three of us had since I did their first shoot back in 2018," Lisa Rose Rankin, the couple's wedding photographer and a friend of Brandon, told POPSUGAR via email. "I said, 'If you ever get married we'll shoot in the mac 'n' cheese aisle' . . . I helped Brandon plan a surprise proposal shoot; we did their engagement pics, and their wedding was in May 2019. After all that, there was no way we'd let that joke just fizzle . . . so they got dressed up again and we had a blast!"

Related:
So, Um, How Do We Put This? Someone Bought a $420,000 Engagement Ring From Costco

As for the day of the shoot? "We didn't really think we were going to do it and we did," Jessica said. "By the time we got to the aisle, there were different employees walking by congratulating us. Customers were shopping and laughing, taking pictures. Everyone was super nice." From enjoying the Costco food court's giant pizza slices to shopping for bulk-sized boxes of their favorite snack, Jessica and Brandon had a blast shooting their post wedding photos. All they were missing was a carefully-crafted Costco wedding cake!

"Little girls were looking at Jess as if she was a real-life princess, and even the workers at Costco had smiles on their faces," Rankin said. "A few workers even stopped traffic for us for a few seconds so we could safely capture the running shots in front of the store. The whole thing just brought so many smiles."

What started out as a simple shopping trip for each of them brought Brandon and Jessica together for life. Now they go together like, well, mac 'n' cheese. See their Costco-themed wedding photo shoot ahead!

Related:
This Couple Got Married by Candlelight During the NYC Blackout, and It Looked SO Romantic
Previous Next Start Slideshow
CostcoPhotographyWeddingReal WeddingsWedding ThemesReal People Stories