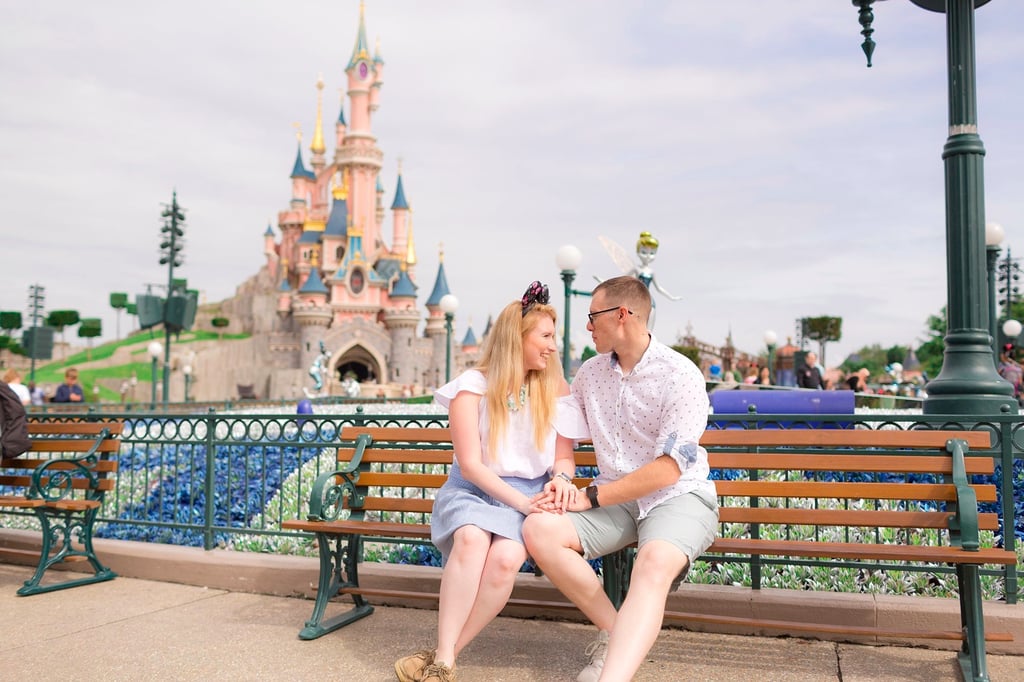 This Man Reproposed to His Wife at Disneyland Paris, and This Time Was Even More Emotional

Renewing your vows isn't the only way to remind your spouse how much you love them. A man named Teylor reproposed to his wife, Alicia, a few years later at Disneyland Paris, and she said it was even more emotional the second time around.

"The feelings were more, so much more," Alicia told us. "Marriage is tough — it's amazing, but tough. This time when he got down on one knee, I was more able to hear him. The first proposal when I saw that he was kneeling I think I just froze then started screaming 'YES!' This time there were open ears and tears."

In his reproposal in front of the Sleeping Beauty Castle, Teylor told Alicia how much he loved her, how amazing of a wife and mother she is, and that he can't imagine his life without her. "He told me he is still committed to me and that he loves me deeply through all the peaks and troughs, then he chuckled, and asked, 'Will you marry me?'" Alicia said. She of course replied "Yes!" and gave him a big kiss.

Related:
Each Table at This Adorable Wedding Reception Is Based Off a Disney Movie!

Living in Germany for a few years now, Alicia, a photographer, was beginning to consider having a wedding or vow celebration like the ones she's been shooting. And that's when the idea of a reproposal started. Alicia casually mentioned to her husband how fun a proposal at Disneyland would be, but to her disappointment, Teylor had absolutely no reaction. So she immediately put it out of her mind until their family trip, which included their baby, Grey, at Disneyland Paris.

"I was shocked and surprised in the best way!" Alicia said.

Their friend and fellow photographer, Dawn of Degrees North Images, was in Paris around the same time for a workshop. As a former cast member at Walt Disney World and a Disney bride, she was already planning to spend a day at Disneyland Paris and offered to capture the special moment for them on camera.

Though Alicia knew it was going to happen, she had no idea what Teylor would say or how magical it'd feel again. The crowd witnessing the couple's reproposal even cheered them on as they hugged. It was so sweet!

See their adorable photos ahead.

Related:
What It's Like to Get Married at Disney World (Spoiler: It's as Dazzling as You'd Expect)
Previous Next Start Slideshow
DisneyWeddingReal WeddingsDisneyland Paris
Around The Web

Beauty Trends
Oh, Boy — These Mickey Mouse Tattoos Are Making Us Want to Join the Clubhouse
by Danielle Jackson 1 day ago

Wedding
This Couple Eloped at a Courthouse in Northern England, and the Bride's Dress Is Everything
by Haley Lyndes 2 days ago

Disney
Disney Cheeseboards Are a Thing, and I Suddenly Need Some Charcuterie
by India Yaffe 3 days ago