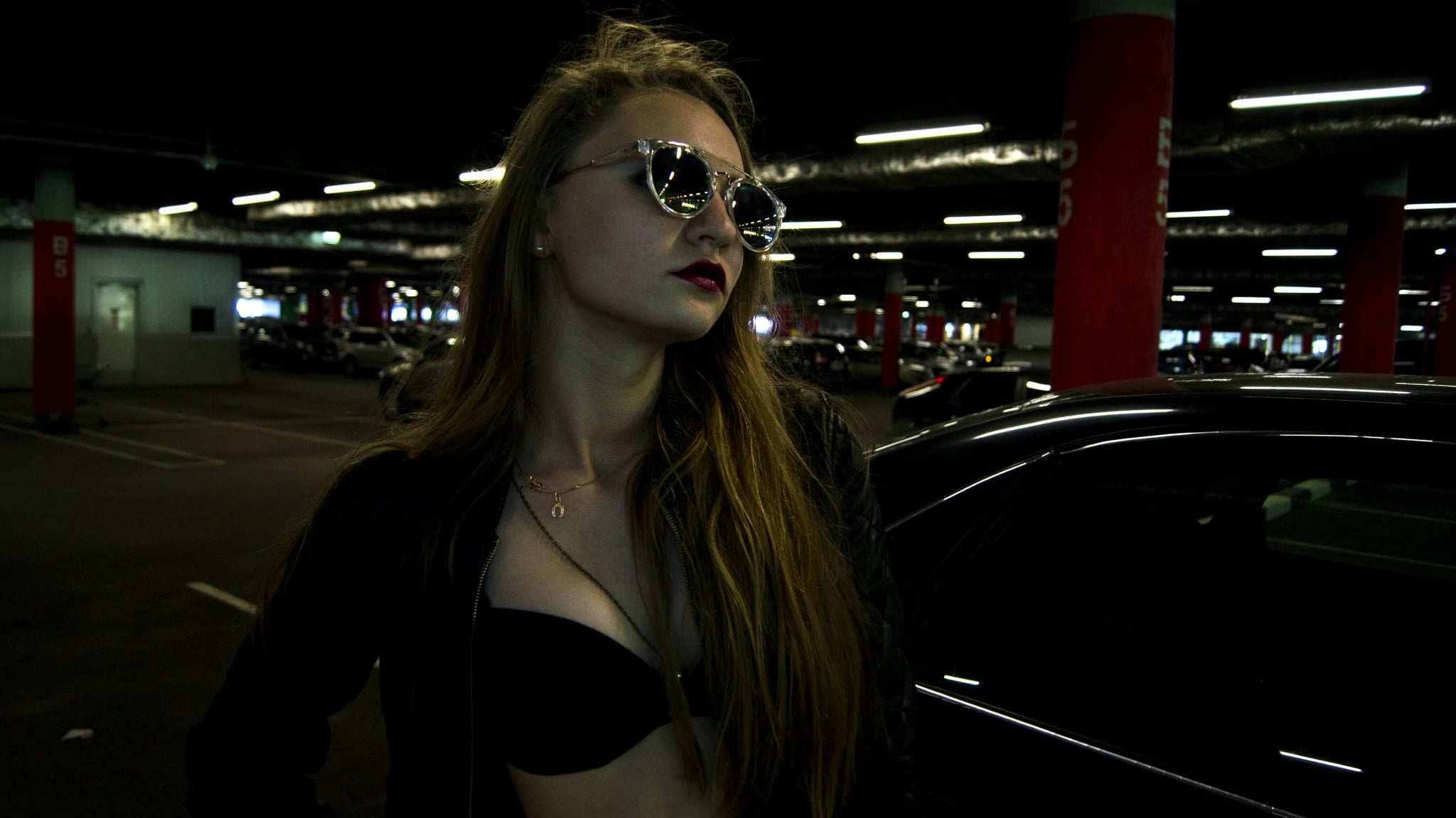 Sex work has been legal in Nevada since the 1970s. Curious as to what actually happens in a brothel, I headed out to visit one and interview the women who work there.

The Cookie Guest Ranch is located in Lyon County, just outside of Carson City, NV, and, at the time of my interviews, has 120 licensed sex workers on staff with a core group of approximately 30 women working as sex workers. At the time of this research, Nevada has 18 legal brothels located throughout eight counties. And, while sex work is legal in Nevada, it is only legal in counties with less than 400,000 people (meaning it is not legal in Las Vegas). This also means that brothels are pushed out to more rural areas, and any other form of sex work (like escorts or street-level sex work) is illegal.

I drive down a dusty dirt road in what feels like the Middle of Nowhere, USA, to a cluster of three brothels at the end of the street. Each is surrounded by tall, white metal gates and has a neon sign blaring against the night sky. I was staying at the Cookie Guest Ranch (Nevada law forbids the use of the term "brothel" in advertising, so they are all referred to as "ranches"), which had a security camera mounted on top of the gate. I pressed a black buzzer and was buzzed in by a security guard.

Once a client enters the brothel, he can ask to see a lineup or just go straight to the bar and wait for the workers to come to him. If he opts for a lineup, the house mother (yeah, there's a house mother) calls the workers by ringing a bell. The workers, donning their lingerie and "stripper shoes" line up and wait to see if they are picked. But, I'm just a researcher, so nobody lines up for me. I am ushered into the kitchen where I begin meeting the various workers. There are 12 women working and staying at the ranch while I'm there, but only eight wished to be interviewed.

Related:
What It's Like to Work at Brothel, From a Woman Who Runs 1

The women working during the weekend I was there varied in age, ethnicity, height, weight, and just about every other demographic you can imagine. The manager explained that a variety of women are purposefully hired and booked to work at specific times so there is little overlap, "We don't want two redheads competing over customers, so only one redhead works at a time," explains Scott, the shift manager.

Some of the women have boyfriends and two are married. Several have children, but there is very little that they all have in common across the board except, as they explained, a lack of good economic prospects either due to prior arrests, education, or opportunity.

As I speak with them, I notice a definite distinction between a sex worker when she is "working" and when she is not (i.e., taking a break). I spend most of my time interviewing women in the kitchen area. They would arrive at the kitchen table in their sweatpants and sweatshirts, wearing slippers or tennis shoes, and sling their weaves over the doorknob or the back of the chair. Then, when they'd hear the bell, they'd slip off their sweats, slip on their Lucite "stripper shoes," clip in their hair and clip-clop out to the bar, where they'd pose seductively for the prospective client.

They are fully aware of this transition, too. Hailey the Happy Hooker, a 23-year-old sex worker, says, "There's Hailey, when I'm in [the brothel] and there's Melissa when I'm in [the kitchen]. I can talk to these girls about anything because they know me as Melissa. But, when I'm out there, I'm so Hailey, it's not even funny." Much research on sex work is devoted to the performance aspect of the work, and Tracy, a 24 year-old sex worker, tells me, "We're all great actresses. We're selling a fantasy. When I'm in that room, I'm whoever they want me to be."

In this particular brothel, safe-sex practices (including condoms, dental dams, and even gloves for hand jobs) are mandated, but some of the women worked at other brothels and stated that that is not always the case. According to them, some brothels expected women to risk their health for the profit of the house, particularly if a client was willing to pay more for sex without a condom (a common phenomenon).

The women I interviewed were very concerned for their own safety and health and viewed customers as potential vectors of disease. As a 39-year-old sex worker, Mickey, explained, "If I catch something from some guy, now I'm out of work for two weeks and that means no money. There's no sick leave." The workers are routinely tested for STIs and HIV, though the customers are not, and the women have to pay for the tests themselves each month.

The Cookie Guest Ranch is one of just a few brothels that has an on-site security guard. I was told that most brothels are equipped with cameras outside, so visitors have to be buzzed in, and that most of the bartenders are aware of who is not allowed on the premises. Additionally, once a worker takes a client to her room, the cashier listens in to the negotiation (workers set their own prices and negotiations are private between the worker and client) to ensure that the house is getting their fair share of the 50/50 split. However, if a worker uses a particular safe word during the negotiation, the cashier knows that she is to continue listening throughout the entire time that the client is in the room. Each room is also equipped with a safety buzzer that alerts the entire house if a client becomes violent.

Related:
Peek Under the Covers of "the Girlfriend Experience" — Clients and Sex Workers Weigh In

Once a sex worker arrives to the brothel, she is not allowed to leave the premises. Management's reasoning for this is that women should be kept on the premises in case someone comes specifically to see them (their schedules are listed online) and to reduce the instances of women working off-site (i.e., street-level or escort work while at the brothel — sort of "double dipping"). The only way a sex worker can leave the premises is if a client wants to take them out, for example, to dinner or gambling. Because they can't leave, everything must come to them. While I was there conducting research, a woman arrived to give Botox injections, a woman arrived selling lingerie, and another arrived selling children's toys. She was the most popular as many of the workers leave their children in the care of a family member while they are away at the brothel working. Several of the women with children confessed feelings of guilt for being away from their kids and often brought them back gifts.

The clients also vary quite a bit. Many come as out-of-town visitors, though this far out from Las Vegas, the women at the Cookie don't get as many "high and crazy drunks." There are regulars, of course, who choose the same worker each time, there are migrant workers, construction workers, executives, some very young men, and a man in a wheelchair that all visit while I'm there. The brothel is open 24 hours per day, so men come at all hours and some come, sit at the bar, and leave without ever having a sexual encounter.

The workers are not supposed to turn down a client (it's frowned on by the house), but the women explain that there are ways around this — usually charging an extremely high price in negotiations will deter the client. Before any sexual encounter, the worker does a "DC" (d*ck check) on the client, where she dons latex gloves and examines his penis for sores, bugs, or a foul smell. If she says to the client, "Hold on one second, I just need a second opinion," and brings in another worker to check, the other worker is supposed to agree something is amiss and they say something to the effect of, "I'm sorry, sugar, but we aren't going to be able to play today. I think you might want to go to a doctor and get checked out. Come back, though, when you're feeling all better."

*The name of this brothel and those working there have been changed to protect their identities.

Healthy Living
Is All This Stress Stalling Your Sex Drive? Experts Explain How to Get It Back
by Chandler Plante 9/18/20