By the time Shaw's Tavern opened at 9:30 this morning for its Comey hearing "covfefe" party, more than 200 people were in line for the 148 capacity bar in DC's hip Shaw neighborhood. The line stretched to the end of the block for most of the hearing, full of people with flexible schedules, teleworkers standing with their laptops out, and a few patrons who joked about falling "mysteriously sick."

As the hearing got started, the mostly 20- and 30-somethings still in line checked social media feeds and news outlets and listened to the livestream on their phones, updating the people around them. They leaned into the tavern's few open windows to hear the restaurant's echoing televisions.

They were just some of the millions of Americans who tuned in to catch the former FBI director's testimony on June 8, as bars nationwide opened their doors early to host viewing parties and serve up cheekily named drink specials.

Andrew Rogin, who trekked from the DC suburbs to meet his friend Alison Farmer for the hearing, described it as a community event. He wanted to watch the hearing around like-minded people and come out for "strength in numbers to piss off Trump." 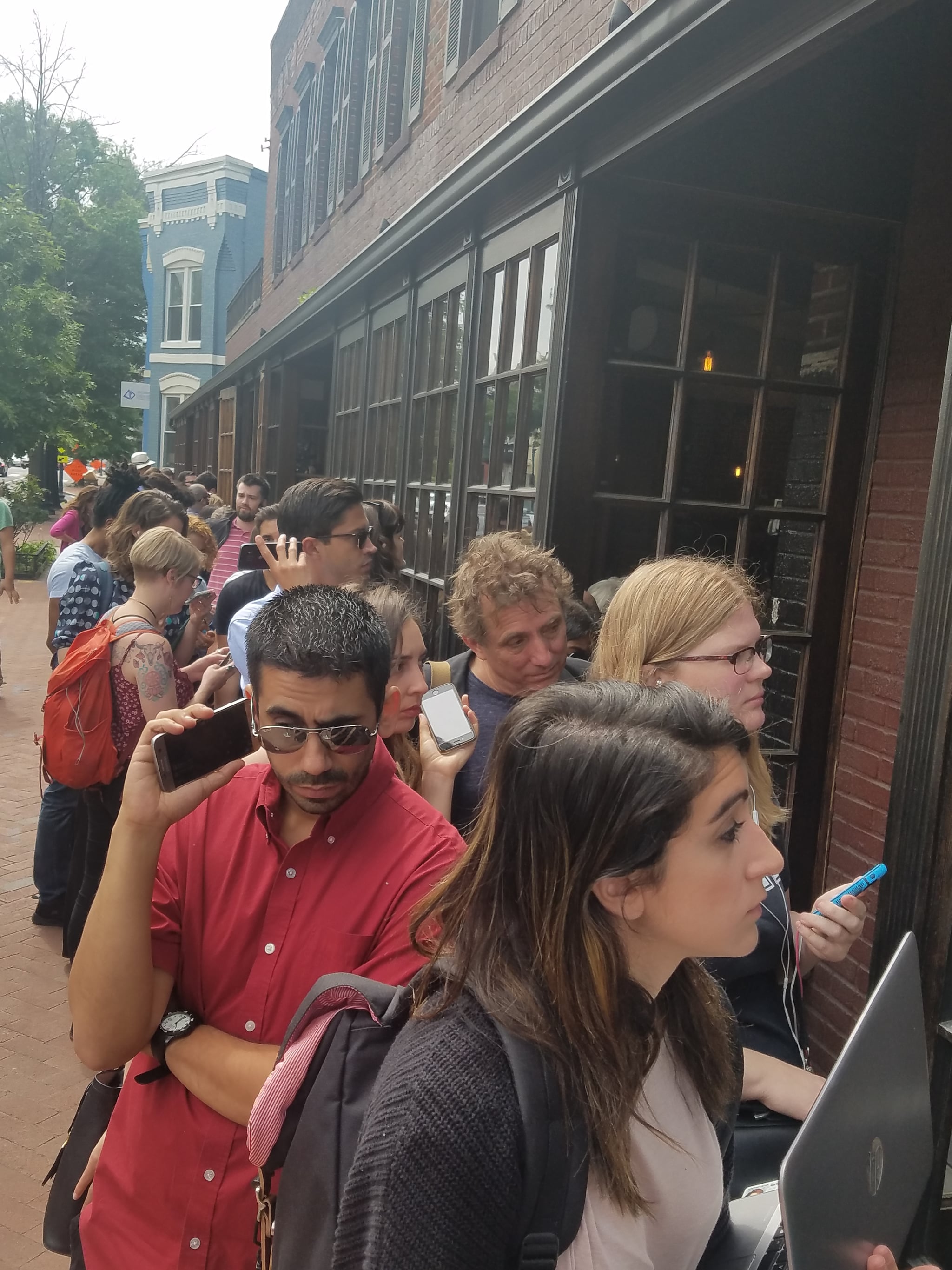 People looked forward to 11:00 a.m., when Shaw's Tavern would be allowed to serve alcohol, including "Comey covfefe" specials made with Stoli Russian vodka flavors. Alison, an executive coach who lives a few blocks from the Tavern, explained the popularity of the event by joking about DC's heavy drinking habit. More seriously, she said, "We're all a little politically nerdy, living so close to it." She added that, since the election, "Anytime there's a chance to stand up and show up, people are."

It's patriotic. If you can't play hooky for this, you're not doing it right.

Matt and Gabrielle, who couldn't use their last names because they took off work to watch the hearing, compared the investigation to Watergate. Gabrielle said: "It's patriotic. If you can't play hooky for this, you're not doing it right. We haven't seen anything like this in our lifetime."

Both admired James Comey. "James Comey's unimpeachable, pardon the pun," Matt said. Gabrielle called Comey, "a smart do-gooder" and said she didn't think Comey was out to get Clinton or Trump. "He's out to protect the nation. That's the job of the FBI: to be nonpolitical."

Samantha Riemer, a 25-year-old consultant from DC, said she wanted to "take in what could be a historical event." She said, "everyone's looking for Comey to roll Trump," but she said she was looking longer term. Even though she didn't think there were any Trump supporters at Shaw's, she said group gatherings like the viewing are important to "spew ideas and exchange different viewpoints and knowledge bases." Inside Shaw's Tavern, the crowd watched and listened intently and quietly, their overall mood expectant and hopeful. Strangers encouraged each other to order Bloody Marys, despite the early hour. Thirty-four-year-old Radha Patel — an account manager for a technology company — welcomed me to a table of four saying "Come, join our community."

Radha, visiting from Chicago for the weekend, said she joked with a friend that she should go to the hearing, and her friend told her about the "covfefe." She called politics "a passion," saying "it feels amazing to be in DC right now. I'm in the action. Nowhere else in the country would this many people be this interested in this."

Recent college graduates Aviana Vergnetti, Eliza Funk, and Will Deeheeger drove in from Northern Virginia. Eliza said that she would be spending money going out anyway, so she would rather do it while talking politics and supporting a civic-minded local business like Shaw's Tavern. Aviana said the covfefe "sensationalizes the hearing, but that's kind of a good thing." She said the hype engages people who normally wouldn't be, "especially people who weren't here." She said it intrigues people outside DC to want to find out what kind of Senate hearing could make people line up outside a bar on a Thursday morning. The crowd laughed at references to the President's Twitter habits and at an exchange in which Senator Marco Rubio asked Comey about being "loyally honest" to the president, and Comey clarified that he had agreed to be "honestly loyal."

Senator Martin Heinrich asked Comey about the president's claims that reports of Russia's involvement in the US election are "fake news." When Comey responded with uncharacteristic passion, saying "It's not a close call. That happened. That's about as unfake as you can possibly get," the crowd cheered and applauded. Another roar went up when Comey clarified that, although he'd never had a conversation with Trump about how to prevent Russian interference in US elections, he had "attended a fair number of meetings on that with President Obama."

But the loudest reaction was to Comey's account of the president calling at lunchtime to ask him to dinner that night. Comey said: "I hung up and had to call my wife and break a date with her. I was supposed to take her to dinner that night." The tavern exhaled a collective, "Aww."