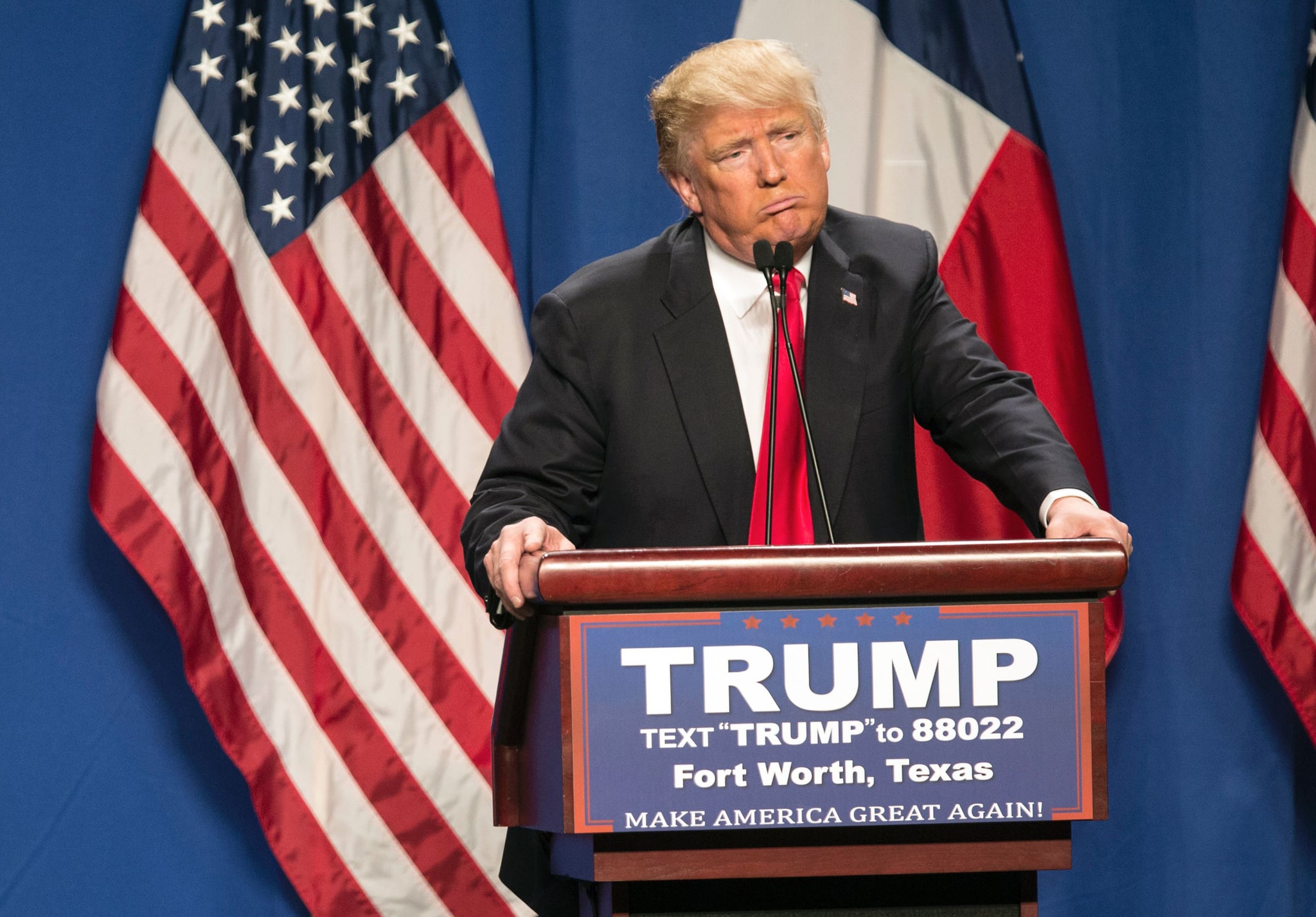 Does the thought of President Donald Trump keep you up at night? Maybe this will make you feel better: he can't win. At least, I'm pretty sure he can't, based on national voting trends, his record, and the growing influence of women voters. Don't get me wrong: more months of Donald Trump in the national spotlight is a scary thing. His reluctance to strongly disavow the KKK, his obvious contempt for women, his reckless and hurtful statements about Muslims and Mexicans, and his general bully persona are just a few things impacting this country for the worse. But I can deal with Trump if he becomes the Republican nominee — so long as we're not set up for eight years of a Trump administration. Here's why that will never happen (I hope).

He Goes Against the GOP's Sober Assessment of How to Win

President Obama won a second term by almost 5 million votes in 2012. The media and pollsters had everyone thinking it was a closer race than it was. Following the loss, the Republican National Committee got together to figure out what happened and how they could win again. Some the recommendations from the autopsy:

After the 2012 election, Republicans licked their wounds and took a hard look at what needs to be done to win. While no one could have predicted the transformational power of Donald Trump, the realities that disfavor extreme-right candidates aren't going away.

The Demographics Are Against Him

In the same report, the RNC recognized that by 2050 the US will be a majority-minority country. Obama won 80 percent of all minority votes in both elections. The GOP has to do something to appeal to non-white voters if it wants to stick around. When white supremacists think you're the candidate they've been waiting for, you're doing something wrong. Trump is winning in the Republican race, but the Republican party is mostly white, a voting demographic that is shrinking nationally.

The General Election Is Different Than the Primaries

You may have read a headline that says Donald Trump is beating Hillary Clinton in head-to-head polls. The Donald himself loves to say this on the campaign trail. But polls aren't worth much until final nominees are chosen and strategies solidified (and many put Hillary ahead).

Once mainstream voters start paying attention, the extreme stances Trump is taking during the primary may hurt him, as they did for Mitt Romney in 2012. Hillary Clinton's camp is working on such a plan. The New York Times reports that the Clinton campaign is taking Trump's innate political savvy and appeal to disillusioned citizens more seriously than his Republican opponents, which means bringing out Bill Clinton and Barack Obama for support. "To fight Mr. Trump's ability to sway the news cycle, Mr. Clinton would not hold back on the stump, and President Obama has told allies he would gleefully portray Mr. Trump as incapable of handling the duties of the Oval Office." I can't wait.

If you haven't noticed, the Republicans are not one big happy family right now. There's talk of a brokered convention, wherein no candidate gets a majority of delegates during the primary season and the party has to fight it out at the Summer's convention. Typically, candidates drop out along the way to avoid this happening, but Ted Cruz and Marco Rubio might not this time. While the establishment's disdain for Trump is part of his appeal, it also fractures his support come general election time.

There Are More Democrats Than Republicans in America

While Donald Trump's party of choice controls the House and the Senate right now, more people in America identify as Democrats than Republicans, which could matter in a high-turnout year. And remember: in five out of the last six presidential elections, Democratic candidates have won the national popular vote.

Since we don't technically elect presidents based on who wins the popular vote (sorry about that, Al Gore), we have to consider the the electoral college, which delegates votes by states. Based on trends, Democrats look pretty good in the so-called "swing states." In 2012, Romney could have won Ohio, Florida, and Virginia and still have gone home a loser. He didn't win those states, and Obama won the electoral college in a landslide by 332–206 votes. Reliable and large "blue states" like California give the Democrats a solid head start.

You Can't Mess With Single Women

An actual quote from Donald Trump on women: "You have to treat 'em like sh*t." That's a great way to win over half the country. The rising political influence of single women feels like a firewall to me. The Donald has provided decades of offensive and straight-up sexist comments about women any Democratic opponent can trot out. As Rebecca Traister explains in New York Magazine and in her new book, All the Single Ladies, the growing number of never-married American women is leading to a political revolution. This voting bloc demands things like pay equality, family leave, affordable healthcare, and robust reproductive rights. Politicians who don't support those things better watch out (reminder: Donald Trump wants to defund Planned Parenthood). According to Traister, "In 2012, unmarried women made up a remarkable 23 percent of the electorate. Almost a quarter of votes in the last presidential election were cast by women without spouses, up three points from just four years earlier."

In 2012, the Republican "War on Women" was a successful message for the Democrats as a whole. Republican senate candidate Todd Aikin's "legitimate rape" disaster was one example of how a candidate's tone-deaf and offensive comments about women's health issues can torpedo a candidate and even a party's chances. While Trump won Republican women in Nevada's primary, note that overall, women are more likely to vote Democrat than Republican — Obama won 55 percent of the female vote in 2012, compared to 44 percent by Mitt Romney.

The Democrats don't have a perfect candidate, but if I had to bet, Barack and Michelle won't be handing over the White House keys to Donald and Melania next January. Still, the impact of Trump's irresponsible campaign will be felt. As Harvard political theorist Danielle Allen writes in the Washington Post, Trump's "success is now providing affirmation and cover to his base of nativists and organized white supremacist groups." Donald Trump has lowered the standards for what is tolerated in American politics. I'm just hopeful that a decisive defeat by the entire country will remind us what we really stand for.