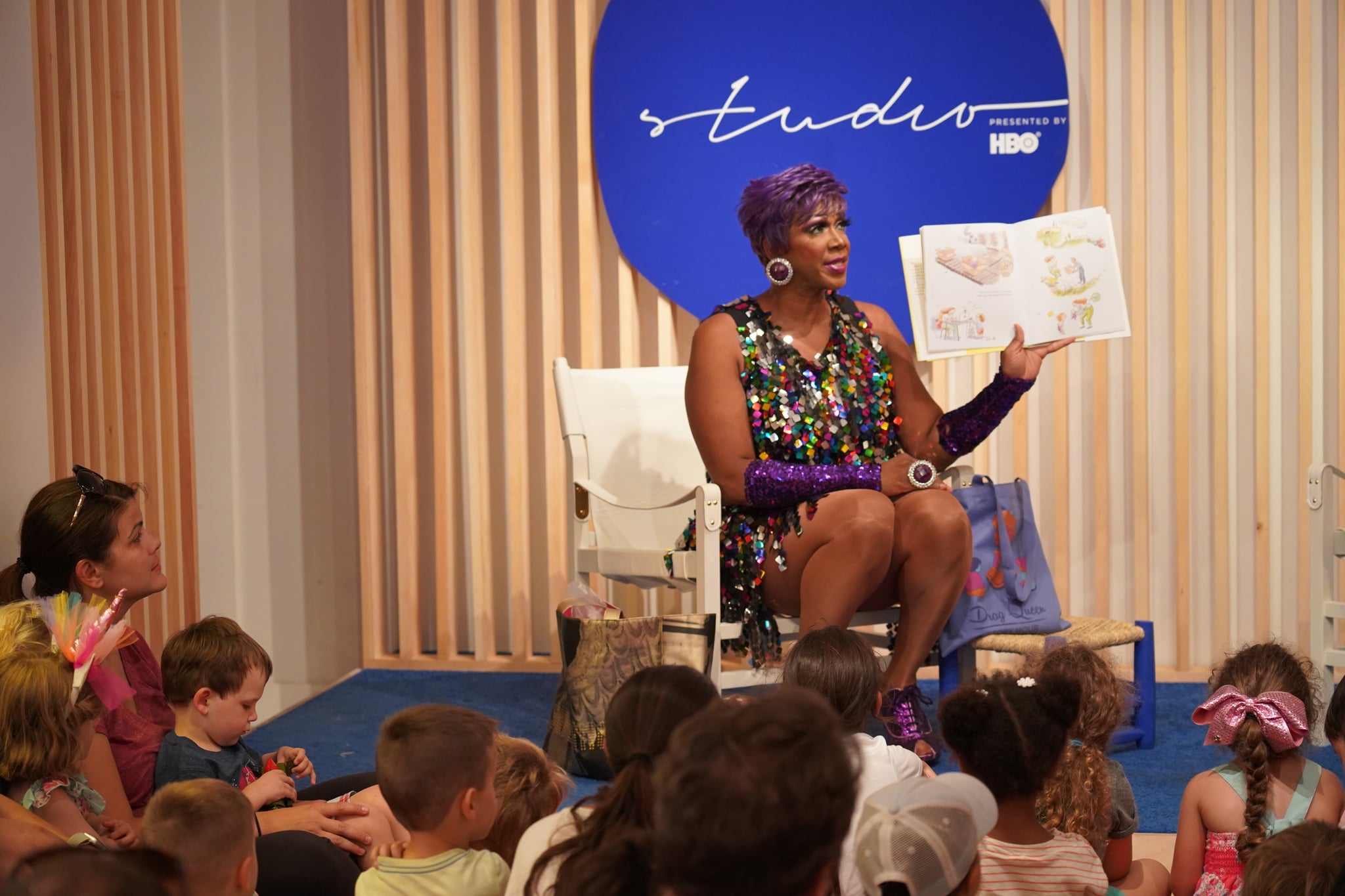 For decades, the art of drag has been relegated to the darkest hours of the night. Drag queens and drag kings alike come to life in dim clubs and hushed theaters, performing artistic numbers, doing death-defying splits and drops, and of course, snatching a dollar or two in tips. Sure, there are times when these gods and goddesses of the night wander into the sunlight; we have drag brunch, LGBTQ+ Pride Month festivals, and even RuPaul's Drag Con. But a drag queen in a library in the middle of the afternoon, reading a book to a group of preschoolers? That's an image that might not immediately come to mind. Luckily, Drag Queen Story Hour (DQSH) is here to undo expectations and to surprise and delight America's youth.

Drag Queen Story Hour began in San Francisco in 2015 and has since exploded across the nation and overseas. This Summer, it made a stop in Provincetown, MA, where HBO has launched a new creative experience celebrating the LGBTQ+ community. The seven-week program is called The Studio, and it features inclusive events, inspiring art exhibitions, intimate talks, and more. One week is called Family Week, a move that makes absolute sense given the fact that Sesame Street is now on HBO. DQSH was featured as part of this exciting week with a gorgeous (and seasoned) queen named Harmonica Sunbeam holding live readings with kids.

To celebrate Drag Queen Story Hour's trajectory and HBO's encouraging move to support the LGBTQ+ community, I hopped on the phone to speak with Harmonica Sunbeam about her experiences. With nearly three decades in the business, she shed light on how far things have moved since her thrilling debut at an NYC drag ball; she walked in a category called "Butch Queen, First Time Up in Drag at a Ball" and won. Now that she's a part of DQSH, though, this new phase of her career has yielded so much more than she bargained for. 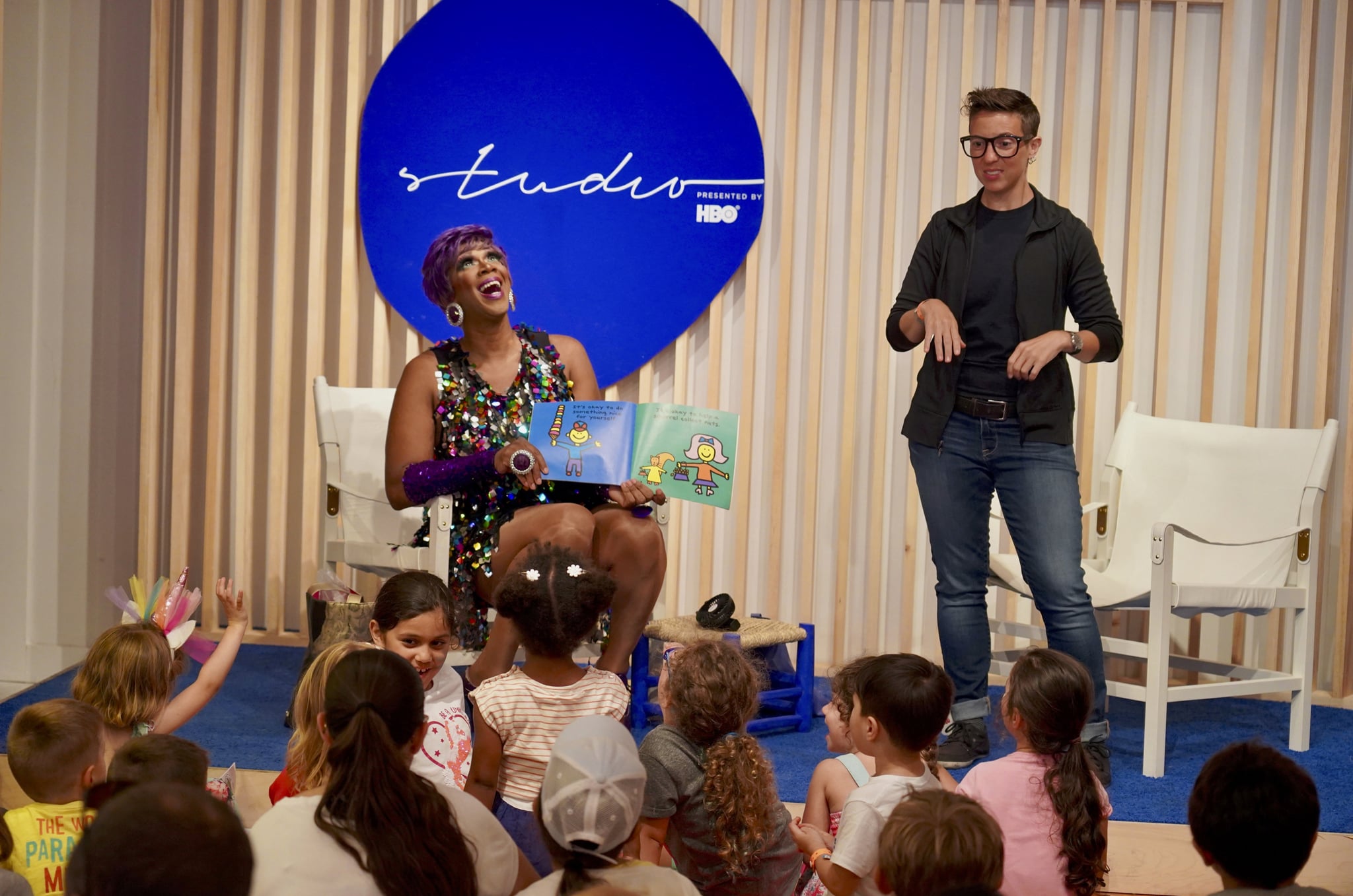 POPSUGAR: When did Drag Queen Story Hour come into the picture for you?

Harmonica Sunbeam: Drag Queen Story Hour originated in San Francisco with a woman by the name of Michelle Tea. Rachel Amy, from Brooklyn, went to San Francisco and saw it, and she brought it back to Brooklyn. The Brooklyn Public Library picked it up, and the first video they did went viral. They had such a demand for more girls — so many events were coming up — that they had an open call. And I saw it on Facebook, and went to the meeting and then to the training, and that's how I became involved. My first Drag Queen Story Hour was in the library in New York City, and it was going to be two pre-K classes.

HS: And a kindergarten class! About 75 kids. And so, right before I go out, they say, "Oh yeah, and The New York Times is here to talk to you, too." No first day of the job pressure there. [Laughs]

"We're trying to raise a new generation of kids who are tolerant of each other, who are open to being who they are, and understanding that we're not all the same and it's OK."

PS: What has your experience been like so far?

HS: It's been more than a year that I've been doing this, and I can tell you at some point during each reading, I think that I'm about to start crying, because it's such an emotional experience for me. Just to see the kids, dealing with the kids, seeing the parents, seeing the bonding between the kids and the parents, and just to see the connection. We're trying to raise a new generation of kids who are tolerant of each other, who are open to being who they are, and understanding that we're not all the same and it's OK.

PS: Have you found that you have to craft a new version of Harmonica when you do these hours?

HS: Well, the funny thing is that drag queens really make this program work, because they're used to dealing with audiences. And dealing with young kids is like dealing with drunk adults. [Laughs] There's a happy medium. Like, "OK, pay attention. OK, look at me. Look at me. OK, let's do this." The good thing about kids — most of them that is — is that they don't have cell phones or Grindr or Scruff or Tinder or anything else to take their attention away from you, as opposed to bars and nightclubs. And the kids really look forward to it. It's a great feeling as an entertainer to walk into a space and people are like, "Yay, she's here!" I might walk into a bar, and they're like, "Oh. OK." 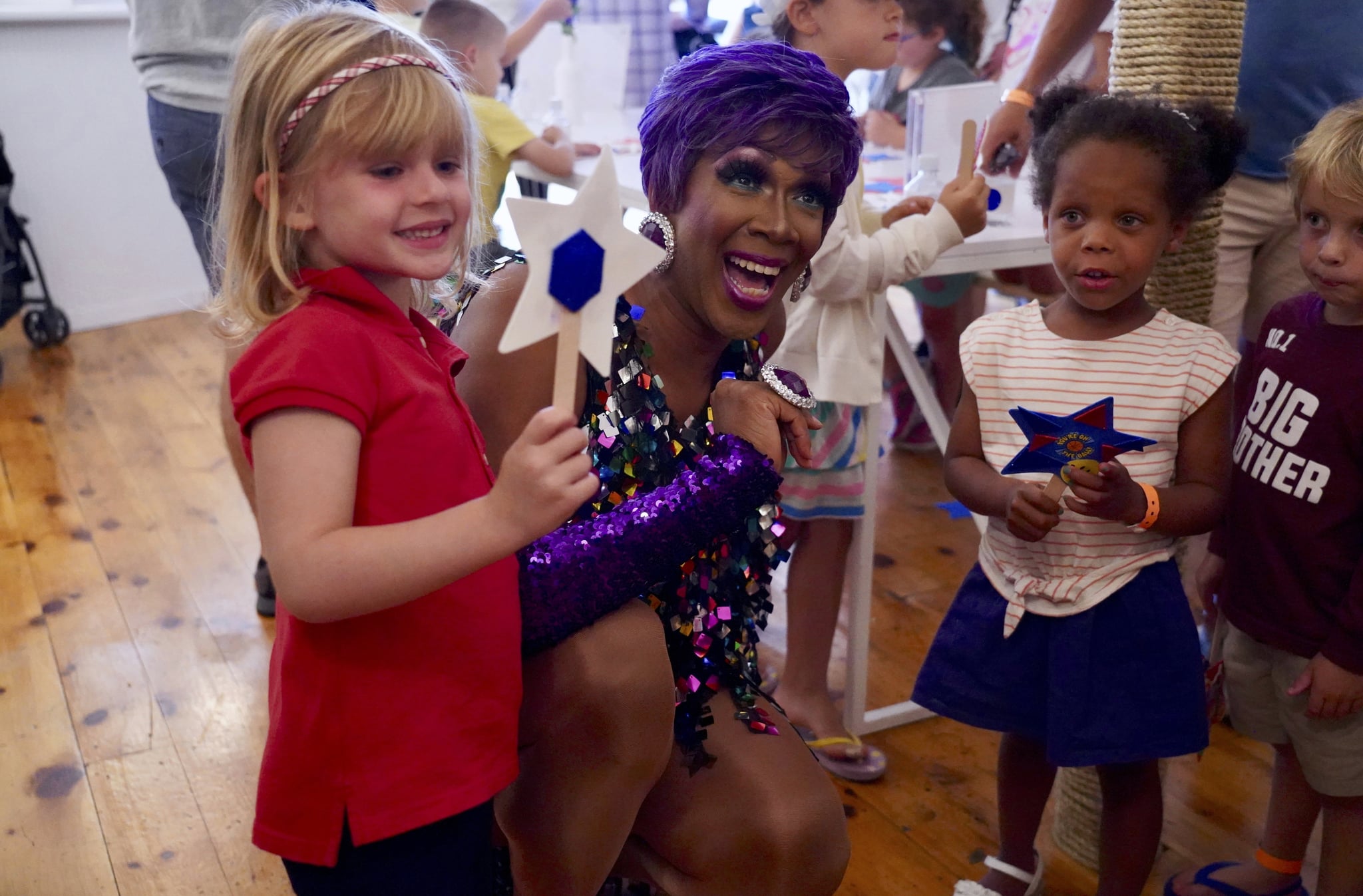 PS: Is there any interaction that sticks in your mind as particularly special?

HS: Once, I was at a library uptown in New York City, and as I was reading, a little girl, she walked up to me, right in the middle of the story, and she tapped me on the shoulder. And I said, "Yes?" And she holds out her hands, and in her hands, she had been collecting all these sequins that fell off my dress.

PS: That's so sweet! And what about the parents?!

HS: Well, it wasn't a personal moment, but it was a written moment. I also do a story hour for kids with special needs in New York City. So there was a young boy, and his mother wrote to me. She said every time they go to story hour now, he has a hard time focusing. But he really, really focuses when I do story hour. And every time he comes to story hour, his question is, "Is Harmonica going to be there?" And it's just great, that he would remember my name, and that he's really looking forward to seeing me again.

"I may ask the crowd, 'Does anyone know what a drag queen is?' And at one particular library, a little girl said, 'Oh, it's a cross between a dragon and a queen.'"

PS: I love that so much. So usually, when you have one of these hours, is there a discussion section where you talk about gender expression and stuff with the kids? Or do you field questions from them? How does it kind of typically flow?

HS: Each place is different. I may ask the crowd, "Does anyone know what a drag queen is?" And at one particular library, a little girl said, "Oh, it's a cross between a dragon and a queen." And I was like, "OK! Yeah!" And so I explained to them what my definition of a drag queen is. And that's anyone who is dressing up to feel fabulous, dressing up in the way that you don't normally do. So you can be a drag king. You can be a drag queen, a drag princess, a drag prince. When we go to a wedding, that's not how we normally dress. Now, we're in drag, you know what I'm saying?

HS: I also think that it encourages conversations between parents and kids. There may be a kid who may be feeling a little bit different and, after an experience like this, may want to say a few things to the parent. Or the parent may notice how well the child responds to the experience, and then they ask them some questions. And if communication can start young, with people expressing themselves and saying how they feel about different situations, it really results in much better, open-minded adults, no matter what happens in the end, no matter what role the child takes. Now, it's that whole communication and that respect, whereas a lot of kids come up not being able to talk to anyone about how they feel, you know? They're afraid to say, "Oh, I feel like this," or, "Sometimes, I feel like this." They don't have anyone to reach out to, and so they take these feelings and they bottle them up. 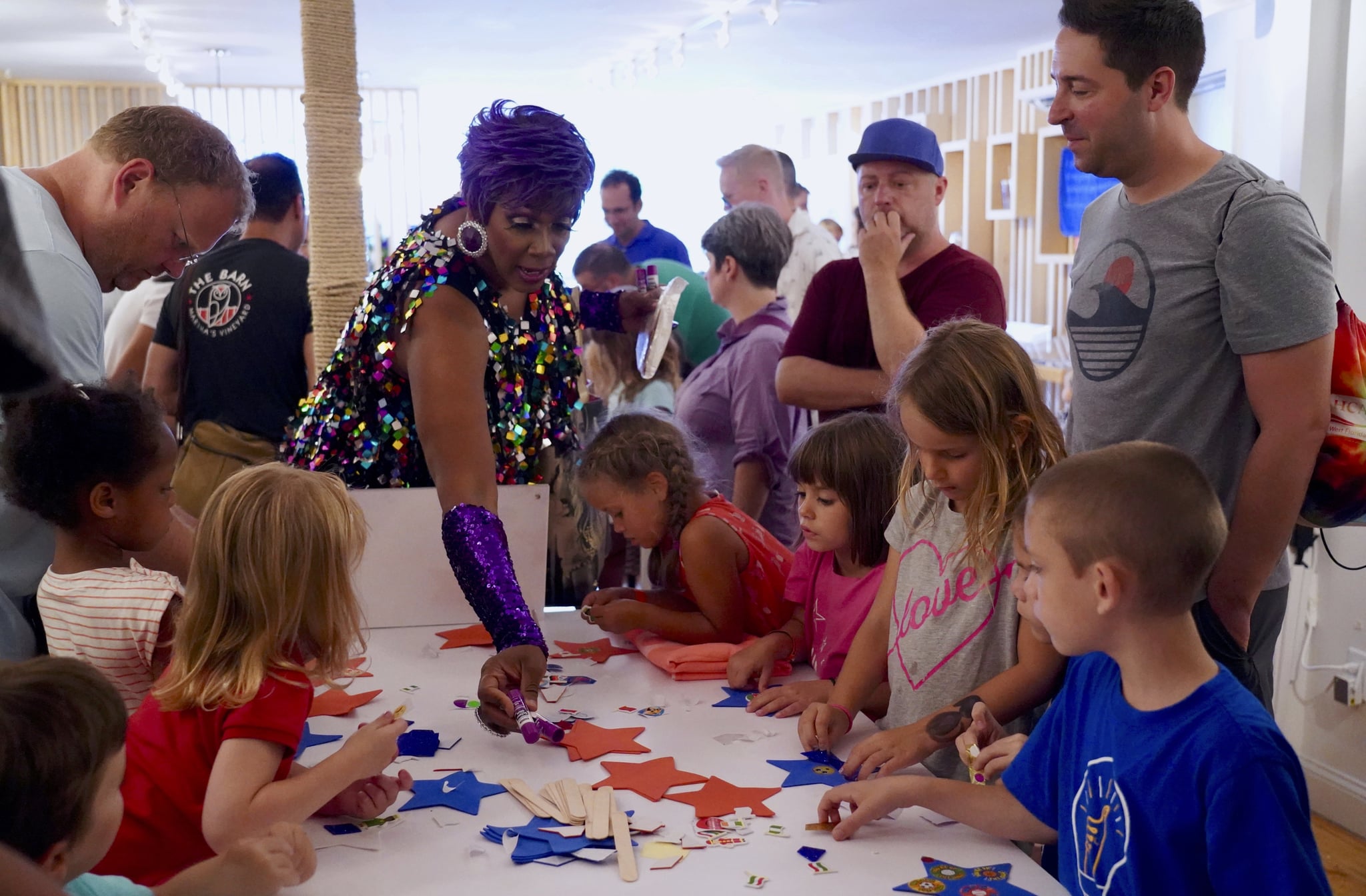 PS: It seems like you're alluding to the fact that there are some people who aren't fond of the program. How do you deal with the naysayers?

HS: We just have to keep doing what we do. You know what I'm saying? You can't make [people] come to the event, but . . . the program is not going to stop, no matter how much they put the program down.

PS: It's so clear that this program is impacting a positive change. Do you find yourself thinking about other ways you can spread this more accepting message?

HS: I have to be me. And I'm happy with who I am. As long as I keep walking in my truth, somehow it's going to rub off on someone else. And that's even when I'm in a nightclub. We have a lot of adult people that consider themselves to be gay or lesbian. But they're still not totally out. At least the drag queens are living, walking in their truth, being themselves, enjoying life without the restrictions. And it makes a big difference.

PS: It's really crazy how much empowering yourself empowers others.

HS: Even when you don't even know it.

"As long as I keep walking in my truth, somehow it's going to rub off on someone else."

PS: And so now this is kind of a new exciting chapter: Drag Queen Story Hour has come to The Studio in partnership with HBO. How does it feel to have this platform to talk about the program and spread its message?

HS: I think it's a wonderful opportunity. I'm thankful that The Studio has brought me here. With all of the diverse programming they've done over the course of weeks, this really ties into family week. We had a really, really big draw in the studio today. And I think it will continue as we do Drag Queen Story Hour. And now, not to say that people didn't know about The Studio before, but more people know about it than ever.

PS: So, at the end of the day, what really makes Drag Queen Story Hour special?

HS: It bridges the gap between two different extremes. We don't always see drag queens and kids together. It's two different worlds meeting, and meeting in harmony.

Dove Cameron
Dove Cameron Opens Up About Her Dysphoria: "I've Been Struggling Lately With the Concept of Self"
by Taylor Andrews 1 week ago