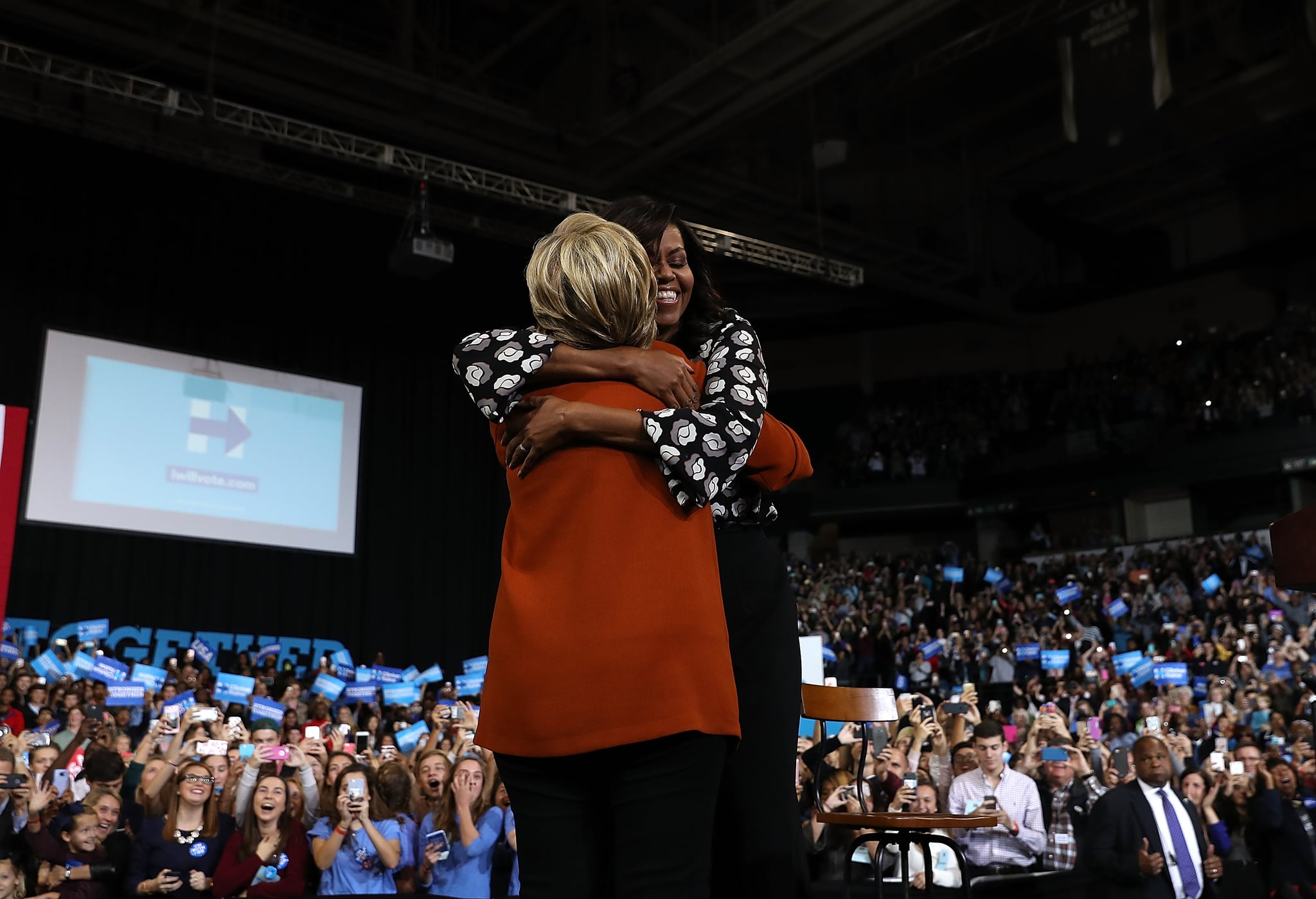 And she did it again. Michelle Obama made a moving case for Hillary Clinton as president and slammed Donald Trump without even saying his name during a speech in Winston-Salem, NC, on Thursday. It was the first time Obama appeared on the campaign trail with Clinton this election, and she acknowledged that it was unprecedented for a first lady to be so active in a campaign.

"That may be true but what's also true is that this is truly an unprecedented election and that's why I'm out here," Obama said. "I'm out here first and foremost because we have never had a more qualified candidate for president than Hillary Clinton."

The first lady called Clinton "my girl" and went though all of Clinton's accomplishments throughout her career ("That's right — Hillary doesn't play," she said) and added that Clinton has more experience than any other previous president in history, including Barack Obama and Bill Clinton. "And yes, she happens to be a woman," Obama said to cheers.

Watch the full video and read on for the highlights:

Two powerhouse women, one stage. Michelle Obama and Hillary Clinton are joining forces for the first time this election at a campaign event in North Carolina.

On Trump as a bad role model

Of course, FLOTUS went after Trump, saying his campaign is grounded in "hopelessness and despair" and that he creates divisiveness by calling on Americans "to turn against each other."

Perhaps her strongest dig against the GOP candidate came when she said he's not a role model for children. Some standout lines:

"As we look into the eyes of our children . . . the stakes in this election could not be more clear."
"This is about who will shape our children . . . not just four or eight years from now but the rest of their lives."
"As Hillary said, when you've raised children in the White House, you are reminded every day of the impact you have. With every action we take and every word we utter, we think of the millions of children watching us. And that's why every day, we try to be the kind of people, the kind of leaders that your children deserve, whether you agree with our politics or not."
"We want a president who honors and values women — who teaches our daughters and sons that women are equal human beings who are deserving of respect."
"We want a president who takes this job seriously and has the temperament and maturity to do it well. Someone who is steady. Someone who we can trust with the nuclear codes because we want to go to sleep at night knowing that our kids and country are safe."

She also encouraged the crowd to vote; one of the main reasons Clinton held the rally in North Carolina is because the battleground state voted for President Obama in 2008 but then for Mitt Romney in 2012. The switch from blue to red was mostly credited to low turnout among minority voters.

On the importance of voting

The first lady spoke about the power of voting but also slammed Trump's claim that the election is rigged:

"Hillary has done her job — now we need to do our job to make her the next president of the US."
"If Hillary doesn't win this election, it will be on us. It will be because we didn't stand with her."
"That's what her opponent hopes will happen . . . when you hear folks talking about a global conspiracy, understand that they are trying to get you to stay home — trying to convince you to stay home because the outcome has already been determined and you shouldn't even bother."
"In this country, in the United States of America, the voters decide who wins or who loses — period. End of story."
"Casting our vote is the ultimate way to go high when they go low."

On what makes the country great

Obama ended her speech with three powerful lines that recalled her family story, as well as those of President Obama and Clinton.

.@FLOTUS: In the US, "the daughter of an orphan can break that highest & hardest glass ceiling and become president" https://t.co/XeUNHMpHoR

"It's a country where a girl like me from the southside of Chicago whose great great-grandfather was a slave can go to the finest universities on earth. A country where a biracial kid from Hawaii, the son of a single mother, can make it to the White House. A country where the daughter of an orphan can break that highest and hardest glass ceiling and becomes president of the United States."

Only 12 days remain until we find out whether she does indeed break that glass ceiling.