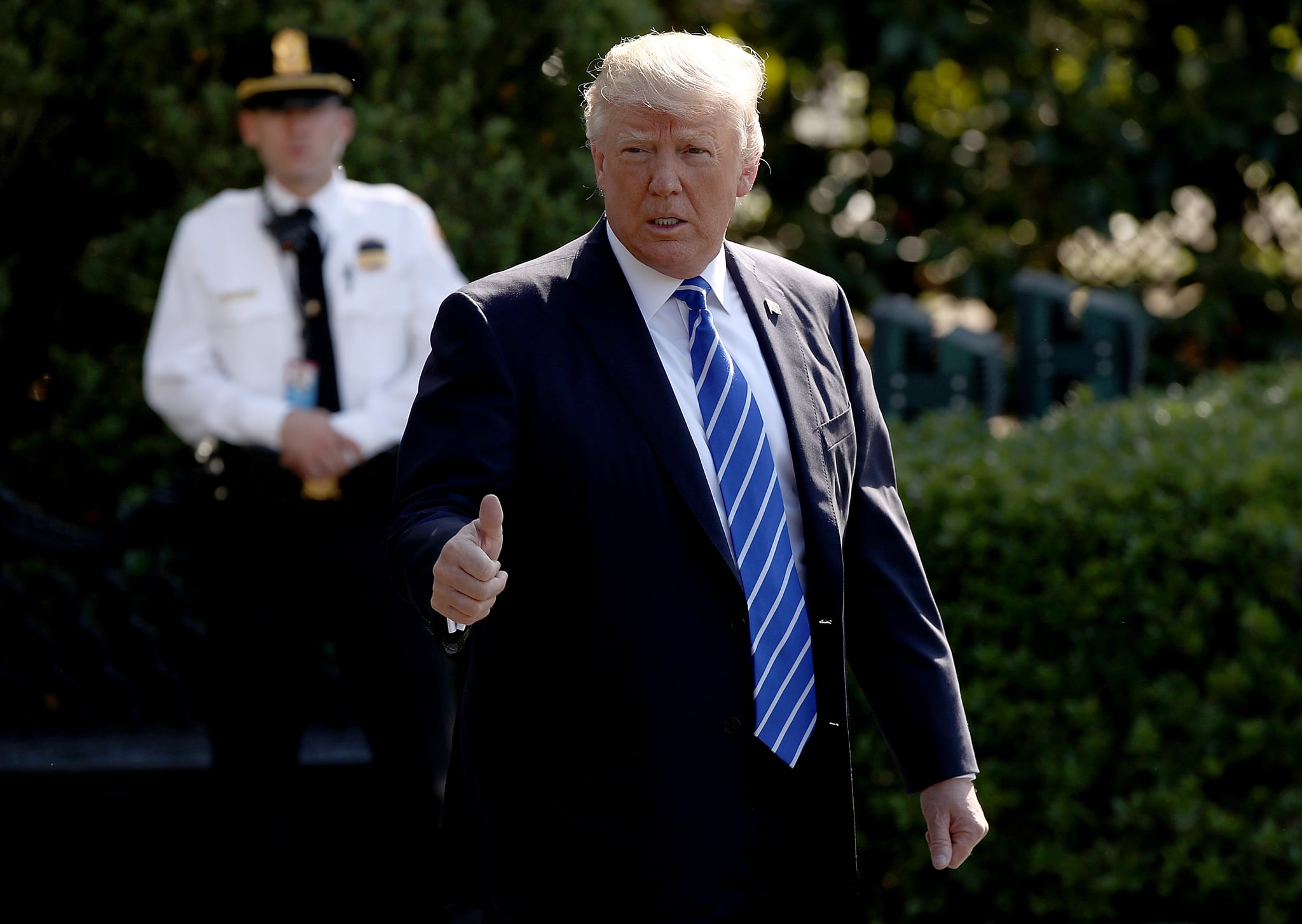 It gets a bit harder every day to keep up with President Donald Trump's latest gaffes or the next piece of information about his potential shady interactions with Russia. But the internet doesn't let anything slide by, especially when Trump makes it so easy. His latest comments to leave the internet reeling include his insistence that he's the only politician "in history" who "has been treated worse or more unfairly." He also calls the investigations into his administration's alleged ties with Russia the "single greatest witch hunt."

That first remark was made during Trump's commencement speech on May 17 to the US Coast Guard Academy. Trump offered advice to the new graduates, telling them, "Never, never, never give up. Things will work out just fine. Look at the way I've been treated lately, especially by the media. No politician in history, and I say this with great surety, has been treated worse or more unfairly. You can't let them get you down. You can't let the critics and the naysayers get in the way of your dreams." Watch a clip of his speech ahead.

The internet immediately reminded Trump there are several politicians and leaders who were treated "worse or more unfairly."

JFK was literally shot in the facehttps://t.co/oBE9YHhLWX

Well, Lincoln & Kennedy were assasinated, and Reagan took a bullet. But yeah, this is much worse. https://t.co/HO8m3msn0u

Trump: No politician in history has been treated worse than me
Us: *remembers Lincoln,Garfield,McKinley & JFK assassinations & birther lie* pic.twitter.com/B9McuHAtWm

Trump: "No politician in history, and I say this with great surety, has been treated worse or more unfairly.”

Julius Caesar was stabbed 23 times by his friends and colleagues https://t.co/uxmrY06Dyq

Some took the time to remind Trump of his involvement in the birther movement against former President Barack Obama.

Trump: No politician in history... has been treated worse or more unfairly

Didn't you add to the birther/Muslim crap Obama had to endure? pic.twitter.com/clBeuOGEww

trump: "no politician in history has been treated worse or more unfairly than me"
obama: pic.twitter.com/RaFfjtNF5C

But as more news broke on May 17, first of House Majority Leader Kevin McCarthy "joking" that Vladimir Putin pays Trump and then that numerous people on Trump's team knew former National Security Adviser Michael Flynn was under investigation, the president tweeted the following:

This is the single greatest witch hunt of a politician in American history!

This once again prompted another hilarious reaction from the internet, including Representative Seth Moulton from Salem, MA.

As the Representative of Salem, MA, I can confirm that this is false. https://t.co/8yJIzZBSE8

@realDonaldTrump First, it's not a "witch hunt" if you did it. There are over 20 personal ties between yourself and Russia. That's probable cause.

Others brought up the Obama birther movement again.

@KellyScaletta @4801712096 @realDonaldTrump AND, a "witch hunt" is for 8+ yrs claiming @BarackObama wasn't born in the US, demanding his birth certificate, & then claiming it was fake!

#WitchHunt he cries, but what about the Birther movement he led for 5 years and lock her up chants he embraced about Hillary Clinton emails