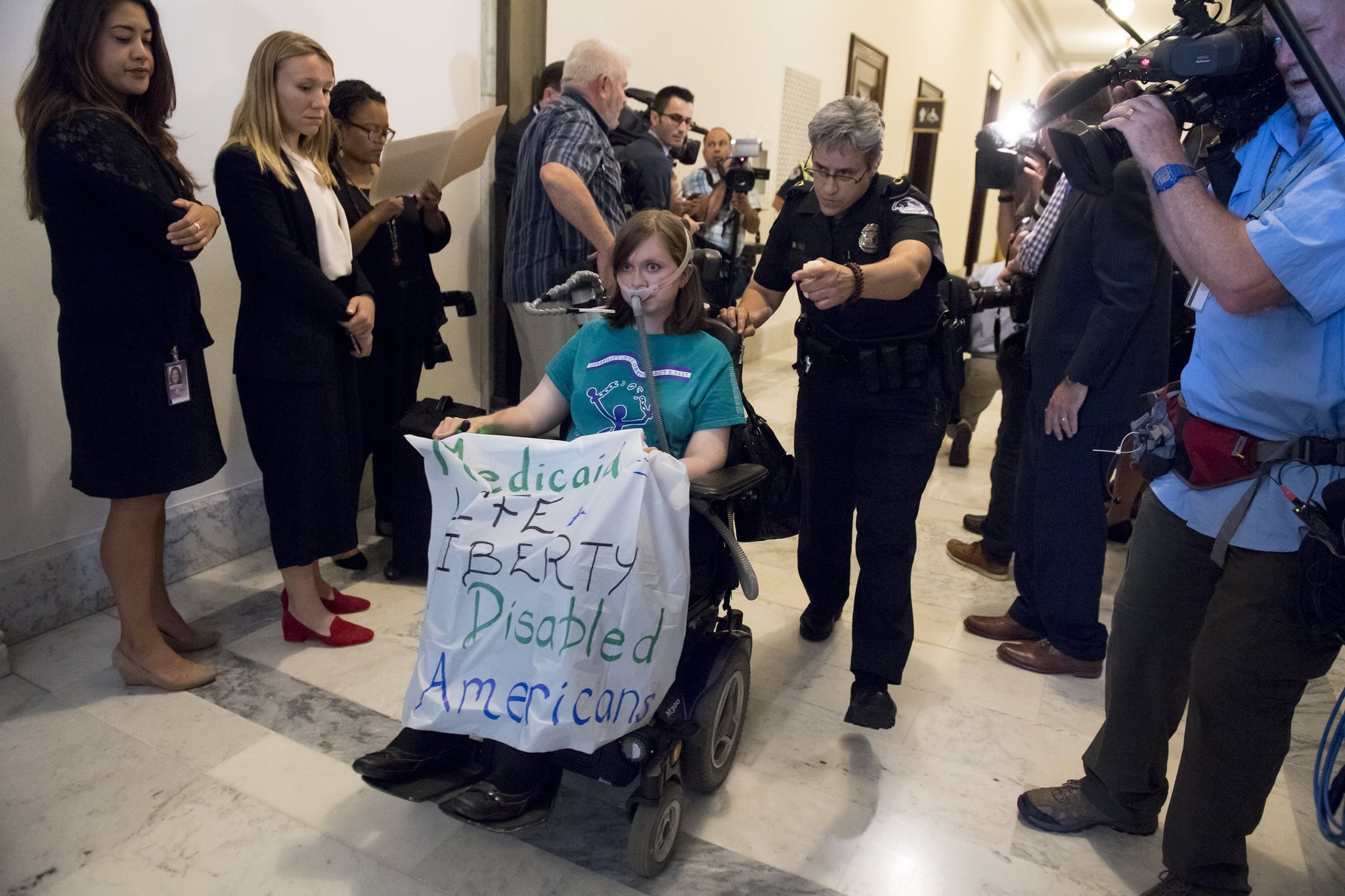 US Capitol Police arrest a protester in a wheelchair outside the office of Senate Majority Leader Mitch McConnell on June 22.

After weeks of intense secrecy and speculation, the 13 Republican senators tasked with coming up with a counterproposal to the AHCA finally put forth their version of the healthcare bill: The Better Care Reconciliation Act. For all intents and purposes, the 142-page document seems remarkably like its House predecessor but does contain a couple significant changes that, unfortunately, make the future of health care look even bleaker than it did at this time yesterday. As Barack Obama just stated in an impassioned Facebook post: "Simply put, if there's a chance you might get sick, get old, or start a family — this bill will do you harm."

As expected, the Senate proposal still eliminates funding for Planned Parenthood and rolls back many of the taxes that were imposed by Obamacare on the wealthy, most notably a tax on indoor tanning (seriously) and one on investments. But there are five other key areas of note that are on the chopping block in the new bill.

1. Insurance requirements. The new bill would completely eliminate the mandate that says most Americans must have health insurance or pay a fine. This means there will be a whole lot more healthy people who will choose to go uninsured, driving up costs for the rest of us. The move is certain to make premiums skyrocket, as those who are in the market will primarily be those that are the sickest and not those receiving preemptive care. This will be compounded by the fact that the bill also removes the rule that requires employers to provide their employees with health insurance or face a fine, which will make availability less consistent for the average working person.

2. State-by-state coverage. Each state can choose to opt out of providing the basic types of essential care currently mandated by Obamacare, like maternity care, addiction treatment, and mental health programs. This could be a tremendous blow to those affected by the opioid crisis, as the loss of mandatory programs combined, the loss of Medicaid, and the fact that a mere $2 billion in funding to combat the crisis has been allotted for in the Senate bill — significantly less than the $190 billion that experts estimate is required — means that many of the 2 million people who suffer from opioid addiction will not be able to get the help they desperately need.

3. Out-of-pocket costs. Low-income Americans on Obamacare who receive subsidies for costs would continue to receive aid for two more years, but in 2019 they would be cut off completely. This could be debilitating to those who depend on the state reimbursing healthcare companies for prohibitively high deductibles.

4. Medicaid. While the AHCA planned to halt expansion of Medicaid a bit abruptly, the new bill enables the 31 states that currently receive funding under Obamacare to have a four-year phasing-out period between 2021 and 2024 — but the catch is that there's a whole lot less funding in the pot for those states to fund the existing programs in place and a much larger cut to overall Medicaid costs follows in 2025.

5. Tax credits. The House version of the bill provided tax credits solely based on age, whereas the Senate version takes age and location into consideration as well. It's a slightly nicer approach than before but still caps out at a lower level than Obamacare, and while it may help some upper- and lower-income Americans, it'll likely hurt middle-class Americans the most.

Senator Mitch McConnell has requested a vote on the bill before the Senate breaks for the Fourth of July holiday break, a time frame that seems ludicrous when compared with the months and years of struggle that Obamacare faced before it was put into place. But that being said, the Better Care Reconciliation Act still has to pass in the Senate before it goes into effect. It requires 50 of the 52 Republican senators to approve of the proposed changes, something that's looking a little more dicey in the wake of the big reveal. At the time of publication, there are already four Senators who have said they can't vote for it as is. Amendments and additional clauses to pacify these individuals are not out of the question, though, so it's not an immediate death wish to the proposal.

There is one other thing to note: if this is all leaving you feeling a bit helpless and wanting to help on the effort to do something on behalf of those affected by the proposed changes, Indivisible has a whole set of guidelines on how you can help try to make the American public's voice heard on the hill.

Joe Biden
Take a Tour of Biden's Transformed Oval Office, and Learn More About Its Symbolic Decor
by Kelsey Garcia 18 hours ago