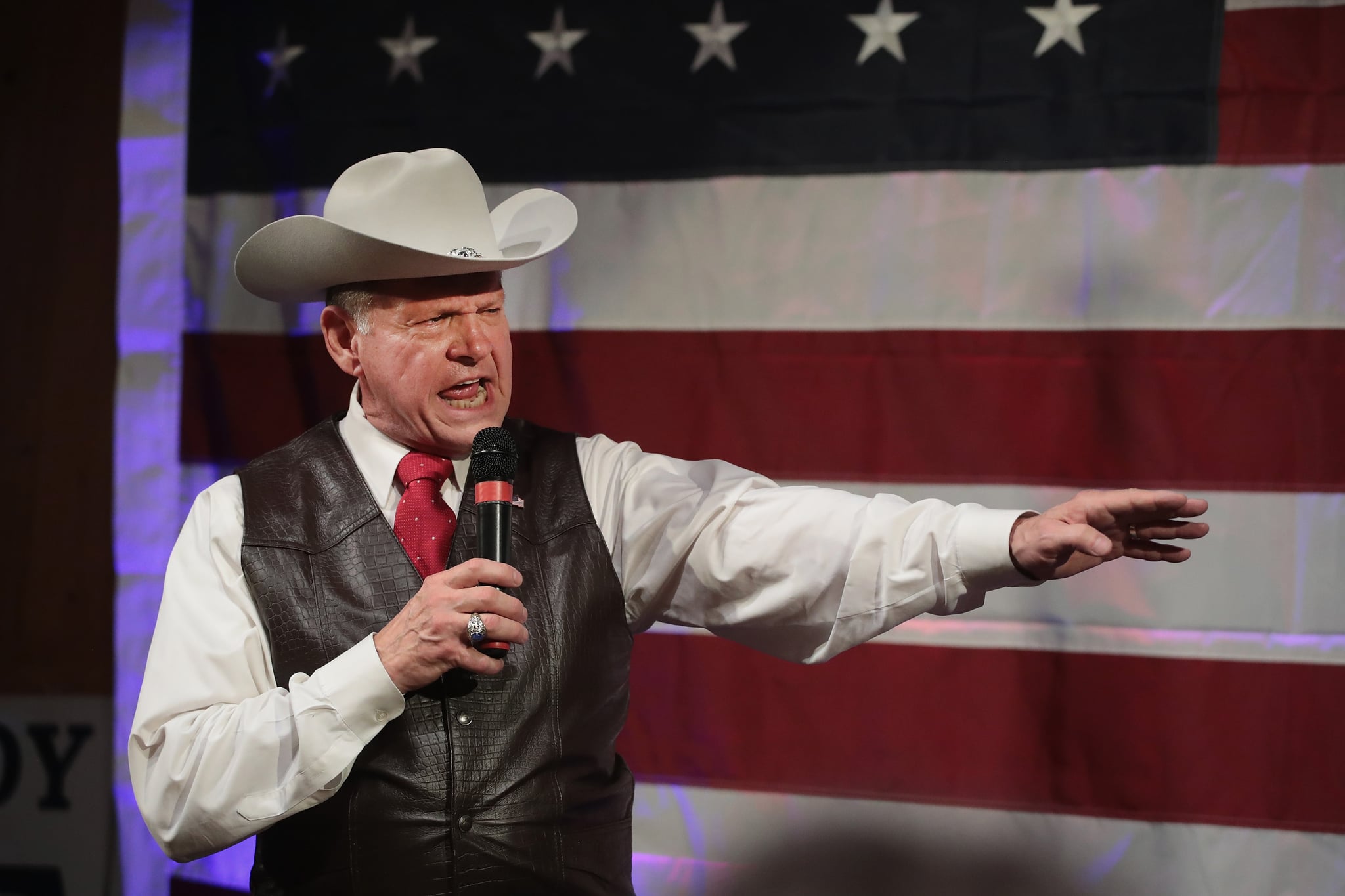 Update: After a series of reports surrounding Roy Moore and sexual misconduct with young women, it was announced on Nov. 27 that President Donald Trump would refrain from campaigning for Moore. The original story, as published in September 2017, remains unchanged below.

The Republican Party is not having a great year. From failing to meet the seven-year-old promise to repeal and replace Obamacare — despite holding a majority in Congress — to continuously playing defense for an erratic president, the establishment has spent far more time spinning its wheels than enacting any sort of political agenda. And if Roy Moore's Senate nomination win is any indication, things are about to get a whole hell of a lot worse for the GOP.

On Sept. 26, Alabama Republicans hit the polls to vote for the party's Senate candidate. The seat in question was the one vacated when President Donald Trump tapped then-Senator Jeff Sessions for the role of attorney general and had been held in the interim by GOP-backed Luther Strange. But despite his incumbent status and the heavy push on behalf of the White House and Senate Majority Leader Mitch McConnell, Strange lost the special election to former Alabama state Supreme Court Chief Justice Roy Moore.

While Moore hasn't secured the seat — he still has to face off against Democratic challenger Doug Jones in the December general election — there are more than a few reasons this early victory is a frightening one, and not just for the Republican establishment to which his win comes as a huge blow. The ideology that he stands for runs counter to much of what this country is built on, and the ascendancy of his particular brand of insurrectionism is something that nobody should be taking lightly.

Donald Trump may have been a disruption to the establishment when he was elected president, but he holds the office with a malleable set of values that he can be persuaded to drop or forget. Moore is far more dangerous, as he lives and dies by his beliefs and has no qualms about putting it all on the line in order to get what he wants. And having that type of person in office frankly poses a far bigger threat to democracy than we've ever faced before.

To give a bit more context, below are seven things every American should know about Moore, his politics, and the movement he represents. And if you're looking for an outlet after reading through, you've got lots of options to choose from to join in the fight against the right.

1. He has been removed from office for defying the law. Twice.

Moore was first ejected from the role of chief justice in 2003 when he disobeyed a court order to remove a 5,200-pound monument of the Ten Commandments from the lobby of the state's judicial building. He ran for the same position again in 2012, but was permanently removed in 2016 after he was caught encouraging probate judges to disobey the Supreme Court ruling that legalized same-sex marriage.

2. He has been on a vendetta against LGBTQ+ families for years.

In his ruling on a 2002 custody case involving a lesbian mother, Moore described homosexuality as "an inherent evil against which children must be protected." He's a vehement objector to the Obergefell v. Hodges ruling (see point No. 1), and when confronted about the fact that his beliefs were similar to those of Russian President Vladimir Putin, Moore responded by saying, "Well, maybe Putin is right. Maybe he's more akin to me than I know."

3. He uses religion and slurs in equal measure to bolster his cause.

"We were torn apart in the Civil War — brother against brother, North against South, party against party," Moore said at a rally in September. "What changed? Now we have blacks and whites fighting, reds and yellows fighting, Democrats and Republicans fighting, men and women fighting. What's going to unite us? What's going to bring us back together? A president? A Congress? No. It's going to be God." When confronted by those who were offended by his comments and found them tasteless, Moore did not back down, instead taking to Twitter to emphasize that the sentiment was religious in nature and therefore true. "'Red, yellow, black and white they are precious in His sight.' Jesus loves the little children of the world. This is the Gospel. If we take it seriously, America can once again be united as one nation under God."

4. He thinks 9/11 was God punishing America for rejecting his values.

Moore feels that because "we legitimize sodomy" and "legitimize abortion" in America, we are effectively rejecting the word of God. According to CNN, he expounded on this to a crowd at a campaign rally, saying that the 9/11 attacks were in retaliation for those stances: "Because you have despised His word and trust in perverseness and oppression, and say thereon . . . therefore this iniquity will be to you as a breach ready to fall, swell out in a high wall, whose breaking cometh suddenly at an instance. Sounds a little bit like the Pentagon, whose breaking came suddenly at an instance, doesn't it?"

It also didn't stop there. "If you think that's coincidence, if you go to verse 25, 'There should be up on every high mountain and upon every hill rivers and streams of water in the day of the great slaughter when the towers will fall,'" Moore added, noting, "You know, we've suffered a lot in this country, maybe, just maybe, because we've distanced ourselves from the one that has it within his hands to heal this land."

5. He believes that Muslims shouldn't be allowed to hold office in the US.

Moore wrote an article titled "Muslim Ellison Should Not Sit in Congress" for Worldnetdaily.com in 2006. The first paragraph tells you everything you need to know about the rest of it: "Last month Keith (Hakim Mohammad) Ellison of Minnesota became the first Muslim elected to serve in the United States Congress and shocked many Americans by declaring that he would take his oath of office by placing his hand on the Quran rather than the Bible. Can a true believer in the Islamic doctrine found in the Quran swear allegiance to our Constitution? Those who profess a sincere belief in Allah say 'No!'"

6. Despite all the evidence, he still thinks Barack Obama isn't an American.

A CNN investigation uncovered that Moore was still saying that Obama wasn't American as recently as the end of 2016. Yes, that's right — even after Trump admitted that the birther thing wasn't real, Moore still believed it.

7. He honestly believes that parts of the US are under Sharia law.

Moore revealed this stance to Vox's Jeff Stein back in August. Here's the exchange, verbatim, because it's just too wild to describe:

Jeff Stein: "Some right-wing conservatives think Sharia law is a danger to America — do you?"
Roy Moore: "There are communities under Sharia law right now in our country. Up in Illinois. Christian communities; I don't know if they may be Muslim communities. But Sharia law is a little different from American law. It is founded on religious concepts."
Jeff Stein: "Which American communities are under Sharia law? When did they fall under Sharia law?"
Roy Moore: "Well, there's Sharia law, as I understand it, in Illinois, Indiana — up there. I don't know."
Jeff Stein: "That seems like an amazing claim for a Senate candidate to make."
Roy Moore: "Well, let me just put it this way — if they are, they are; if they're not, they're not. That doesn't matter. Oklahoma tried passing a law restricting Sharia law, and it failed. Do you know about that?"
Jeff Stein: "No, I don't."
Roy Moore: "Well, it did. The thing about it is it shouldn't have failed because it can be restricted because it's based on religious principles . . . Be careful on the religion [question] because it's very confusing. People don't explain the definition of religion. Put it right at the top, 'Religion is the duties you owe to the creator and the manner of discharging it,' per the United States Supreme Court, per Joseph Story. When you define religion, we get it all straight. You're free to worship Buddha and Muhammad. The reason that is free is because of Christian principles. Because of the two tables of the law — the first table can't be directed by government. He never gave Caesar the authority over the rights of conscience. In fact, it says it right here if you look right there, that the rights of conscience are beyond the reach of any human power; they are given by God and cannot be encroached on by any human authority without a criminal disobedience of the precepts of natural or revealed religion."
Jeff Stein: "I'd like to learn more about the communities in America you think are under Sharia law."
Roy Moore: "I was informed that there were. But if they're not, it doesn't matter. Sharia law incorporates Muslim law into the law. That's not what we do. We do not punish people according to the Christian precepts of our faith — so there's a difference. I'll just say: I don't know if there are. I understand that there are some."