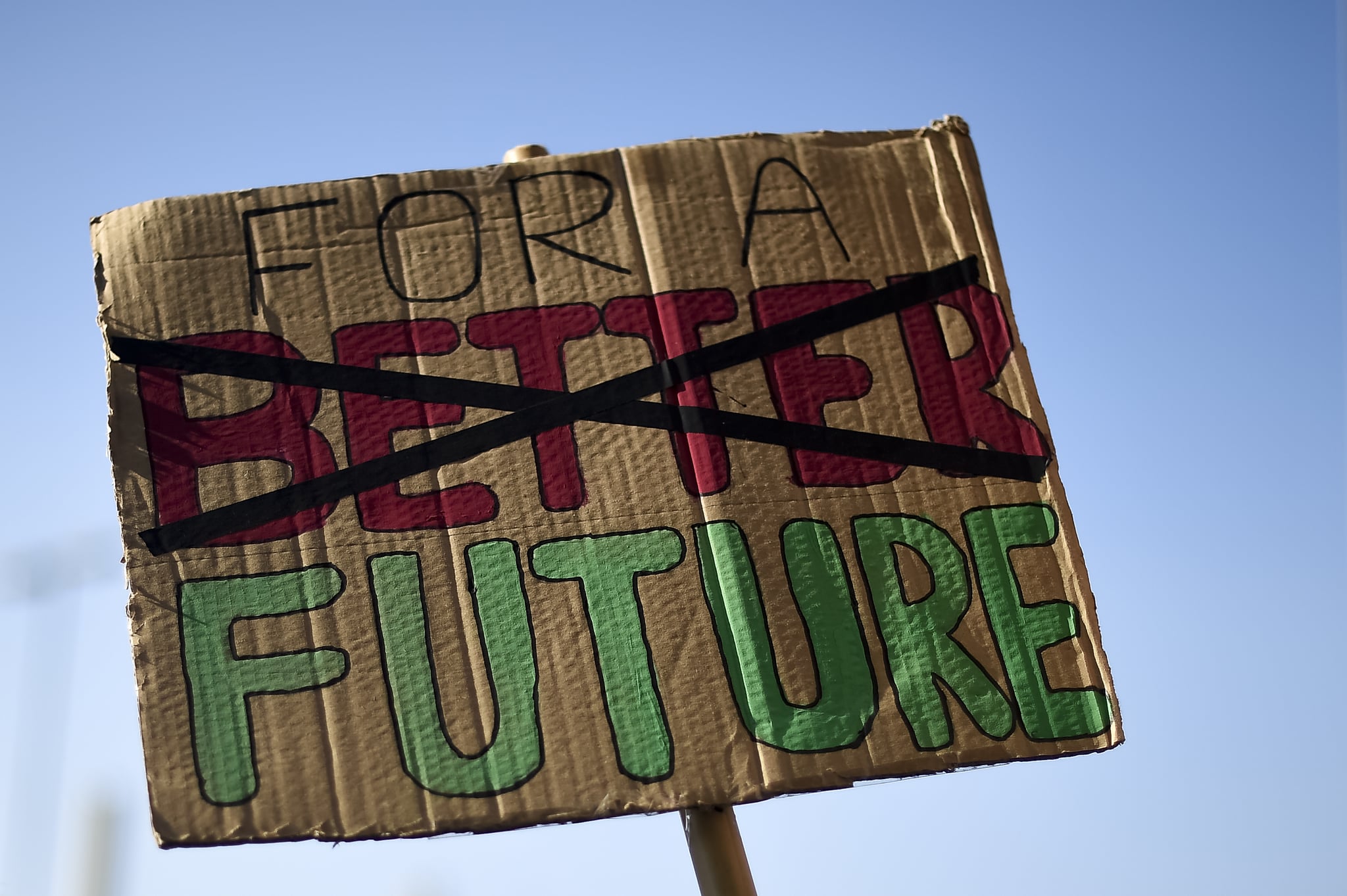 Naina Agrawal-Hardin is a 17-year-old local and national organizer with the Sunrise Movement and a US Youth Climate Strike coalition representative based in Ann Arbor, MI.

When Donald Trump won the 2016 presidential election, I was 13. I stayed up until 3 a.m. glued to the TV in horror. That night, I wrote in my journal: "I don't feel safe in my own country anymore." Exactly 20 days later, the Gatlinburg Fire ravaged my maternal grandparents' community in eastern Tennessee. Exacerbated by high winds and drought, it almost consumed their cabin near the Great Smoky Mountains National Park. From afar, I watched every Christmas I've ever spent there flash before my eyes, already mourning the loss of my favorite place in the world. When a last-minute shift in the winds worked in our favor, I couldn't believe our luck.

Just a few months later, floodwaters began to rise in my paternal grandparents' tiny hometown in North India: Forbesganj, Bihar. I was inundated with images of street vendors losing their carts and stray dogs struggling to stay afloat. A world away, I felt utterly powerless. Fortunately, our family home there is on a hill. The waters receded just in time, and we were lucky once again. These two disasters, opposite extreme events on opposite sides of the world, left me feeling simultaneously paralyzed and galvanized.

Growing up in Ann Arbor, MI, I'd always perceived the climate crisis as a distant threat. Yet in the span of just a few months when I was 13, I came to realize that for Indigenous, Black, brown, and poor communities across the world, it was already claiming lives and livelihoods.

The UN Intergovernmental Panel on Climate Change gave us 12 years to achieve "rapid, far-reaching, and unprecedented changes in all aspects of society" to avoid the worst effects of climate change.

While I was waking up to the immediate threat the climate crisis poses, our president-elect was dismissing global warming as a "hoax," and enjoying an inauguration funded by the same fossil fuel CEOs whose actions are responsible for the destruction in my family's communities. Shortly after taking office, he announced his plan to withdraw the United States from the Paris Climate Accord (a historic agreement from the United Nations Framework Convention on Climate Change meant to fight climate catastrophe around the world), which was only the beginning of his deregulatory agenda. The following summer, he followed through with that plan. One year later, the UN Intergovernmental Panel on Climate Change (IPCC) released a report that publicly sounded an alarm bell that had already been ringing in my head: it gave us 12 years to achieve "rapid, far-reaching, and unprecedented changes in all aspects of society" to avoid the worst effects of climate change. That summer, the floods in Bihar were even worse.

Related:
The Climate Emergency Is Real, and It's Made Me Rethink My Desire to Have Kids

Trump's election confirmed that Americans cannot expect bold climate leadership from the Republican Party. But in the nearly four decades since ExxonMobil scientists first discovered the concept of global warming, Democrats have passed virtually no adequate climate legislation, and the few solutions on the table have completely ignored critical connections between racial, economic, and environmental justice. The truth is, the same racist, classist, colonial systems of oppression that claim innocent Black lives, infringe on Indigenous sovereignty, and cost millions their healthcare during a pandemic are also causing the climate crisis. As a result, the world's best scientists are now telling us what marginalized communities have been saying for decades: we need a complete, intersectional, societal transformation to defeat it.

Politicians won't fight for an unprecedented societal restructuring on their own. They need social and environmental justice movements with a vision for a better world to push the limits of their imagination.

That means divesting from the extractive, exploitative fossil fuel industry and reinvesting in low-carbon, high-payoff parts of our society. The vision of the Green New Deal does just that, connecting rapid economic decarbonization with prioritization of high-paying union jobs, public education, local farming, affordable healthcare, and more, with an emphasis on frontline communities. Up until now, politicians on both sides of the aisle have utterly failed even to consider climate solutions at that scale.

This year's election presents an urgent opportunity to change that. With the IPCC report's 2030 deadline to slash emissions fast approaching, and the COVID-19 pandemic wreaking havoc on lives and livelihoods globally, social change at a scale to address the underlying causes of the climate crisis is both more important and more feasible than ever before. After decades of inaction, it's clear that electoral politics alone will not save us from the climate crisis. Politicians — especially moderate ones like presumptive Democratic presidential nominee Joe Biden — won't fight for an unprecedented societal restructuring on their own. They need social and environmental justice movements with a vision for a better world to push the limits of their imagination. In 2020, it's crucial that we elect candidates who can be influenced by strategic, relentless organizing.

President Trump's stance on climate change has remained unchanged, despite the massive global climate strike movement and subsequent surge in voters' support for aggressive climate action. He feels no accountability to climate-concerned voters, and is thus immobile on the issue. Biden, however, has proven himself to be at least somewhat responsive, with the recent release of an improved climate plan. It involves more ambitious targets for clean energy, a huge increase in promised investment, and new environmental justice commitments, too. Certainly, these updates are a step in the right direction: Biden's 2020 plan is now more progressive than Bernie Sanders' was when he ran in 2016, thanks to four years of intense movement work. However, it's far from a vision in line with what science and justice demand. There's a lot of work left to do.

Although less visible than the presidential race, 2020's down-ballot elections (lower-profile local races) are as, if not more, important for jump-starting a decade of transformative change. Local elections are a major opportunity to win governing power by electing genuine movement leaders, like Jamaal Bowman in New York's Congressional 16th District and Cori Bush in Missouri's First Congressional District, to local, state, and congressional offices. In the fight to build resilient communities that can withstand climate disaster, city councils, county commissions, and state legislatures have a particularly vital role to play.

If we elect candidates who we can hold accountable to implement a bold climate justice agenda, then we can spend the next decade replacing oppressive systems with new ones that protect people and the planet over profits.

As we saw during the Obama era, whether or not Democrats win control of the House and Senate will make or break the ability of a Biden administration, if elected, to pass good climate policy. These down-ballot elections also provide a chance to reward incumbent climate justice champions, like Senator Ed Markey from Massachusetts and Congresswoman Rashida Tlaib from Michigan's 13th Congressional District, and cement climate as a politically strategic issue to invest in. Up and down the ballot, 2020 has the potential to radically transform our capacity to enact meaningful climate solutions. If we elect candidates who we can hold accountable to implement a bold climate justice agenda, then we can spend the next decade replacing oppressive systems with new ones that protect people and the planet over profits.

This year, 3,800,000 Biharis have been affected by heavy flooding, and four rivers in the area are flowing above the danger mark. The ever-rising floodwaters there are now accompanied by an impending "COVID storm," and serve as a constant reminder of what's at stake in November: not just Americans' prospects of a livable future, but also the lives of poor people of color worldwide in the present. The COVID-19 crisis has made it clear that we, as a nation and a world, are woefully underprepared to handle massive societal crises, and that marginalized groups are the first and hardest hit as a result. As Americans teeter on the edge of economic recession and watch the coronavirus death toll increase, the shadow of the climate crisis looms larger every day. In November, we must seize the reins: this is our moment to steer ourselves toward an era of justice and prosperity for everyone.