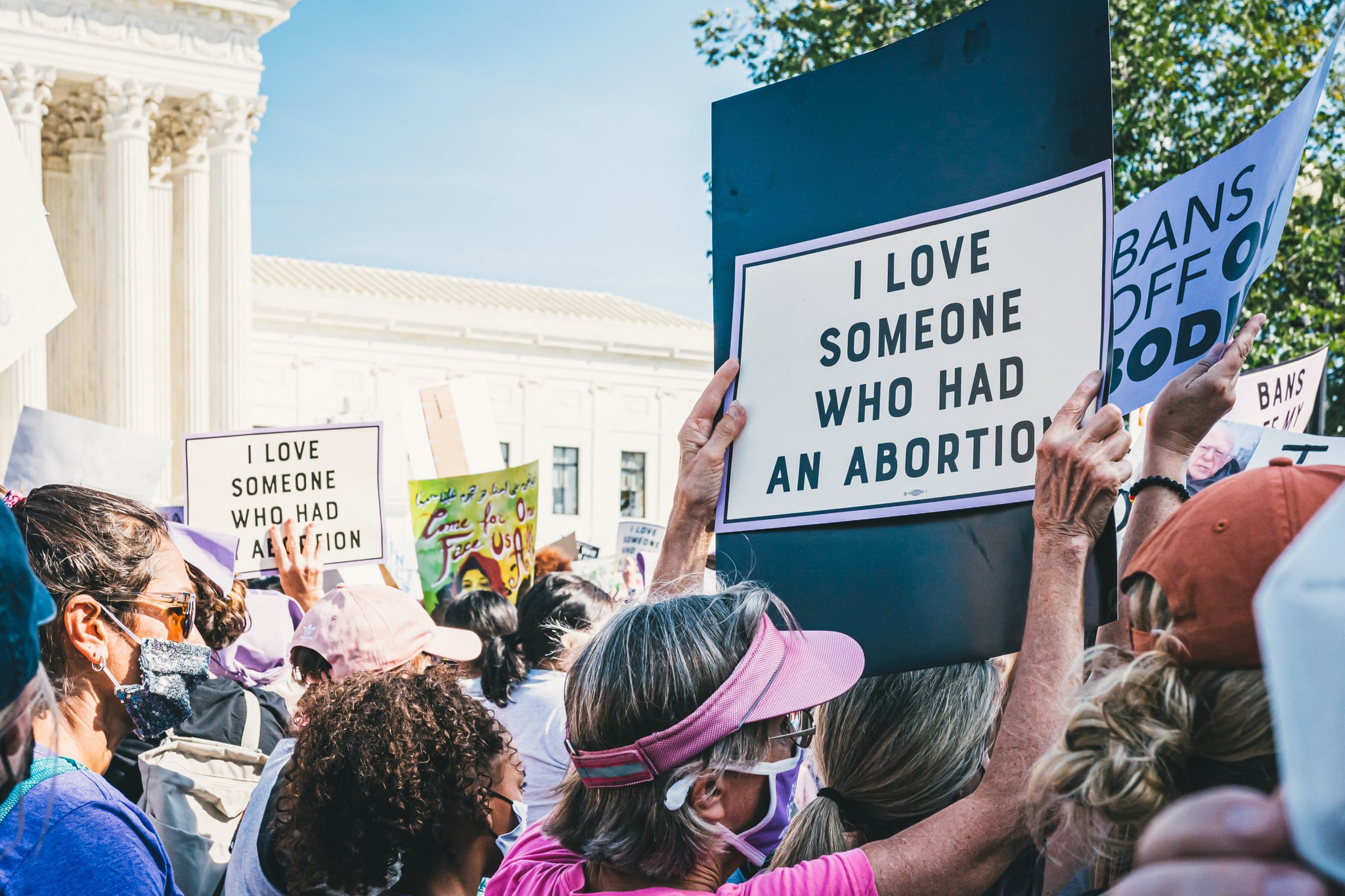 I was 16 years old the day I found out I was pregnant, peeing on a stick in my best friend's bathroom while she and her older sister waited anxiously outside the door. We huddled together, staring at the positive pregnancy test for what seemed like ages. I was scared, but they hugged me and assured me that we'd figure it out. It meant so much not to be alone in that moment.

I can't imagine what young people in Texas are currently facing under Senate Bill 8, which bans abortion after six weeks. The new law is considered the most extreme anti-abortion legislation since Roe v. Wade. What's even more frightening is that a case going before the Supreme Court on Dec. 1 could actually overturn Roe and decimate access to abortion across the country. I fear for young people like me who could lose the already limited autonomy we have over our bodies.

I grew up in a tight-knit Catholic family and found out I was pregnant while attending a Catholic high school where sex ed was abstinence-only and abortion was vilified, so I panicked at the thought of telling my parents that I was pregnant. But I knew I did not want to be pregnant. Once the initial emotional rollercoaster of telling my parents passed, I felt a sense of calm. They assured me that they supported me in getting an abortion and that we would get through it together, not in spite of their religious beliefs, but because at the heart of those beliefs are values of love and compassion.

My mom took me to a clinic where we learned I'd been pregnant for many months already. As a student athlete, missing periods wasn't unusual for me, and like a lot of people who discover pregnancies later, my body just hadn't shown signs that I recognized as pregnancy symptoms.

I was still sure of my decision to have an abortion, but my pregnancy was too far along to obtain one in my home state. We were referred to a clinic in Colorado, one of the few states that doesn't ban abortion later in pregnancy. With the help of a local abortion fund, we obtained some financial assistance for travel expenses, and my dad accompanied me to Colorado.

Related:
5 Ways to Support Abortion Access in the Wake of Texas's Restrictive Ban

In the waiting room, I flipped through a book where former patients had drawn pictures or shared words of encouragement. I sat there stunned to read these stories from other people who had been in my position. Many of them were young like me. A kind of peace came over me as I realized they had all gotten through it and I would, too.

I wish I could have accessed abortion care earlier and closer to home, but my body didn't follow legal timelines.

Getting an abortion changed my life. In fact, it saved me. I have respect for people who make different decisions than I did. If that is what is right for them, they should have the support and resources they need. But I personally could not continue that pregnancy. I wish I could have accessed abortion care earlier and closer to home, but my body didn't follow legal timelines. People who get abortions later in pregnancy often don't learn that they're pregnant until after the first trimester and then have trouble accessing abortion care that is increasingly more expensive and harder to find. And young people like me are statistically the most likely to seek care later. We often lack comprehensive sex education, have limited access to birth control, and are unfamiliar with our changing bodies. We may struggle to get information about pregnancy options and have little to no financial independence or agency to get abortion care as soon as we would like.

When I see headlines and social media posts from friends and family about anti-abortion politicians — from Texas, Kentucky, Montana, or Florida — pushing for laws that ban abortion later in pregnancy, I always worry about the impact on people like me. Politicians don't think about people like me when they push cruel legislation and play politics with health care, but we are the ones who bear the impact. When they use inflammatory language to demonize people who have abortions, it's people like me they shame, and when they put up roadblocks to abortion, it's people like me they prevent from getting the care we need.

As the Supreme Court weighs the fate of Roe this fall, access to abortion is on the line like never before, and the care that I was able to get may soon be out of reach. Before my abortion, I didn't understand the breadth of abortion restrictions and how hard it could be to get care even with abortion being legal. I was incredibly fortunate to have loving people supporting me throughout my experience, and I want that for everyone. The way people talk about abortion in this country initially kept me from telling my story. I share it now because, like the people who wrote in the book I read at the clinic, I want young people going through this to know they're not alone and help is available.

Rose is a freshman in college and hopes to one day work in professional sports.