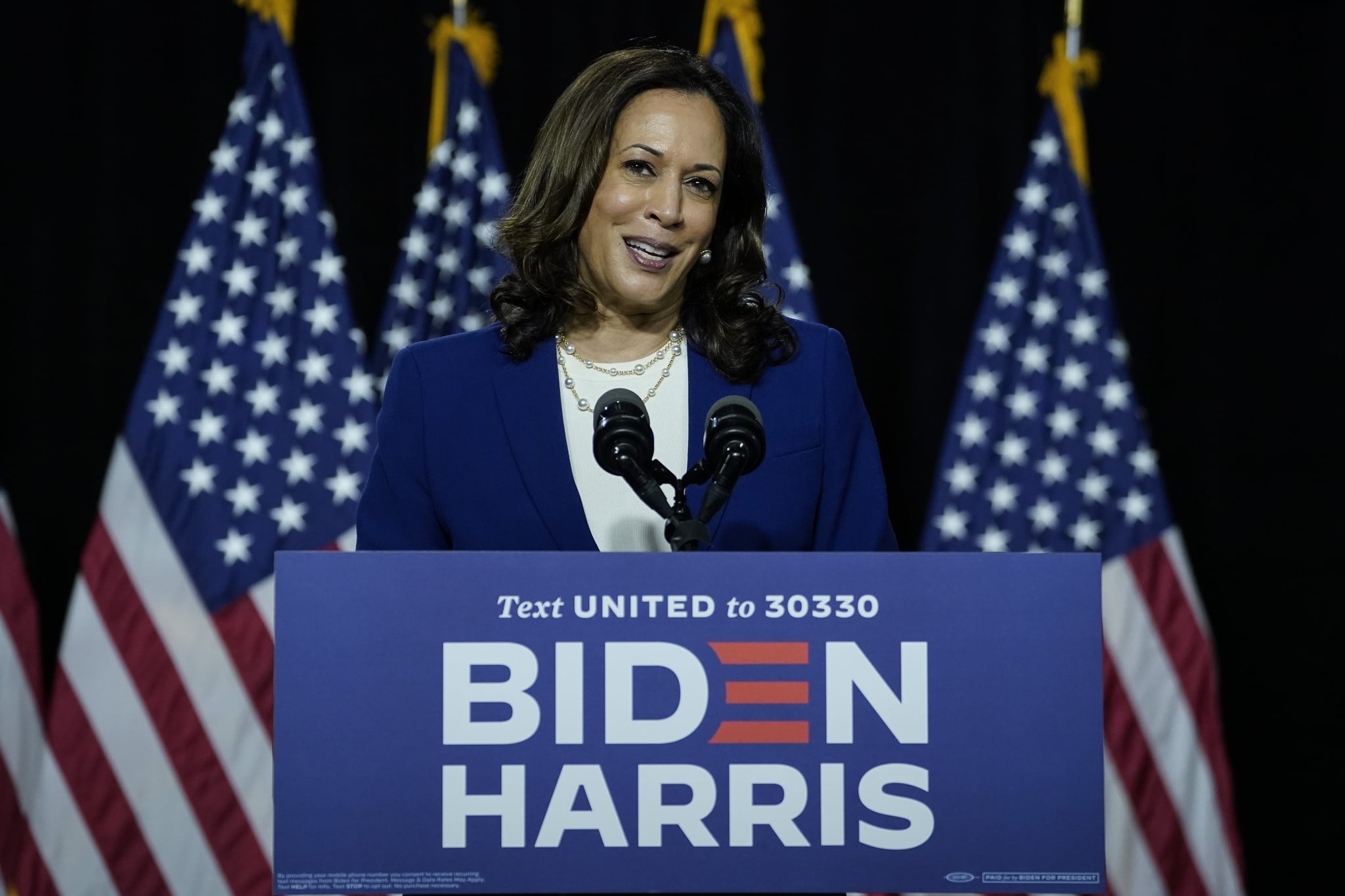 After months of speculation, Sen. Kamala Harris has been named as Joe Biden's vice president pick for the Democratic ticket. Both voters and pundits have been more invested in Biden's VP choice than during a typical election year, especially after he vowed to choose a woman during a March 15 debate. If Biden is elected in November, he'll be 78 on Inauguration Day, making him the oldest president in history — so it was crucial that he select a running mate who is well-prepared to take over and govern at any moment, should it become necessary.

Harris was the first woman and the first Black person to serve as California's attorney general, so she's no stranger to shattering glass ceilings. After being elected to the Senate in 2016, she quickly made a name for herself on the national level thanks to her no-nonsense questioning of Trump's Cabinet nominees, Supreme Court Justice Brett Kavanaugh, and Attorney General Bill Barr. ProgressivePunch, a non-partisan database of Congressional voting records, rates her as the fourth most progressive member of the Senate.

During their Aug. 12 appearance, Biden made clear that he views Harris as a partner who will be involved in every major decision that's made in the Oval Office. "I asked Kamala to be the last voice in the room [before I make any important decisions]," he stated. With this in mind, let's take a look at where Harris stands on some of the most important policies and issues facing Americans today.

In April, Sen. Harris announced the COVID-19 Racial and Ethnic Disparities Task Force Act to address the fact that the virus is infecting and killing people of color, especially Black Americans, at much higher rates than white Americans. In May, she joined forces with Senators Bernie Sanders and Ed Markey to introduce legislation that would provide a $2,000 monthly check to the millions of Americans who are in financial crisis due to the pandemic. Last month Sen. Harris introduced the RELIEF Act, which would allow renters and homeowners to remain in their residences throughout the pandemic. The proposed legislation followed on the heels of reports that 30 percent of Americans missed housing and rental payments in June. During their first COVID-19 briefing as running mates, Biden and Sen. Harris called on every governor to mandate wearing masks in public for at least the next three months.

Sen. Harris has faced criticism for her background as a district and state attorney and identification as a "progressive prosecutor." As reported by The Washington Post, she has been meeting with Black Lives Matter activists to discuss legislation that would address the myriad problems with policing and criminal justice. Though Sen. Harris has also been criticized for her prosectutorial record of cases involving police, in June, she and other lawmakers introduced the Justice in Policing Act. The legislation would ban chokeholds and no-knock warrants, limit state and local law enforcement's access to military-grade equipment, require the use of body cameras and dashboard cameras, establish a national registry of misconduct by law enforcement officials, and improve investigations of police misconduct, among other changes.

Sen. Harris is a co-sponsor of the Child Care for Working Families Act, which was introduced last year by Sen. Patty Murray and Rep. Bobby Scott. The bill would ensure that families who earn less than 150 percent of their state's median income would never spend more than seven percent of their income on childcare. It also increases federal funding for programs that provide childcare to all kids under the age of 13, and would increase the salary of childcare workers.

Sen. Harris has been a strong supporter of the Obama-era Deferred Action for Childhood Arrivals (DACA) program, which protects individuals who came to the U.S. undocumented when they were children. In addition to reopening DACA to new applicants, Sen. Harris seeks to remove age restrictions for those applying. She supports providing health insurance to undocumented immigrants.

Sen. Harris has a record of supporting LGBTQ+ rights that dates back to 2004, as reported by NBC News. As the district attorney of San Francisco, she formed a hate crimes unit specifically focused on anti-LGBTQ violence. In the Senate, Sen. Harris has introduced legislation to support the LGBTQ community, such as the Census Equality Act. She also co-sponsored a bill to ban conversion therapy nationwide and vowed to fight for the reversal of the Trump administration's transgender military ban.

Sen. Harris has made it a priority to repeal the Tax Cuts and Jobs Act, which decreases tax rates for businesses and wealthy Americans. In 2018 she introduced The LIFT (Livable Incomes for Families Today) the Middle Class Act, which would provide a refundable tax credit of $3,000 per person and $6,000 per couple in households earning less than $100,000 per year. Sen. Harris supports a federal minimum wage of $15 per hour.

Sen. Harris has fought to improve maternal health. According to data from the CDC, the maternal mortality rate more than doubled between 1987 and 2016. The CDC also found that Black and Native American women are approximately three times more likely than white women to die from pregnancy-related causes. In an effort to address this issue, Sen. Harris introduced the Maternal Care Access and Reducing Emergencies (CARE) Act. "My Maternal CARE Act will establish implicit bias training throughout the medical profession and help ensure that women—especially Black women—have access to comprehensive, culturally competent care," Harris stated in a May 2019 press release.

During the Democratic primary she introduced a new healthcare plan that would allow Americans to choose between enrolling in private health insurance plans or selecting a government-run option. "Medicare works," Harris wrote in a Medium essay. "Now, let's expand it to all Americans and give everyone access to comprehensive health care." In the same essay she stated that under her plan, Medicare for All would cover "all medically necessary services, including emergency room visits, doctor visits, vision, dental, hearing aids, mental health, and substance use disorder treatment, and comprehensive reproductive healthcare services."

Sen. Harris has a 100 percent rating from NARAL, proving a consistent pro-choice voting record. She has repeatedly called for repealing the Hyde Amendment, which bars the use of federal funds to pay for abortion and disproportionately affects low-income people and women of color. During her own campaign for the Democratic nomination, Sen. Harris said that if elected, she would work to codify Roe v. Wade into law. She also proposed legislation modeled after the Voting Rights Act of 1965, which would require that states get clearance from the Justice Department before passing laws that restrict abortion access. Sen. Harris voted against a bill that would ban abortions after 20 weeks.