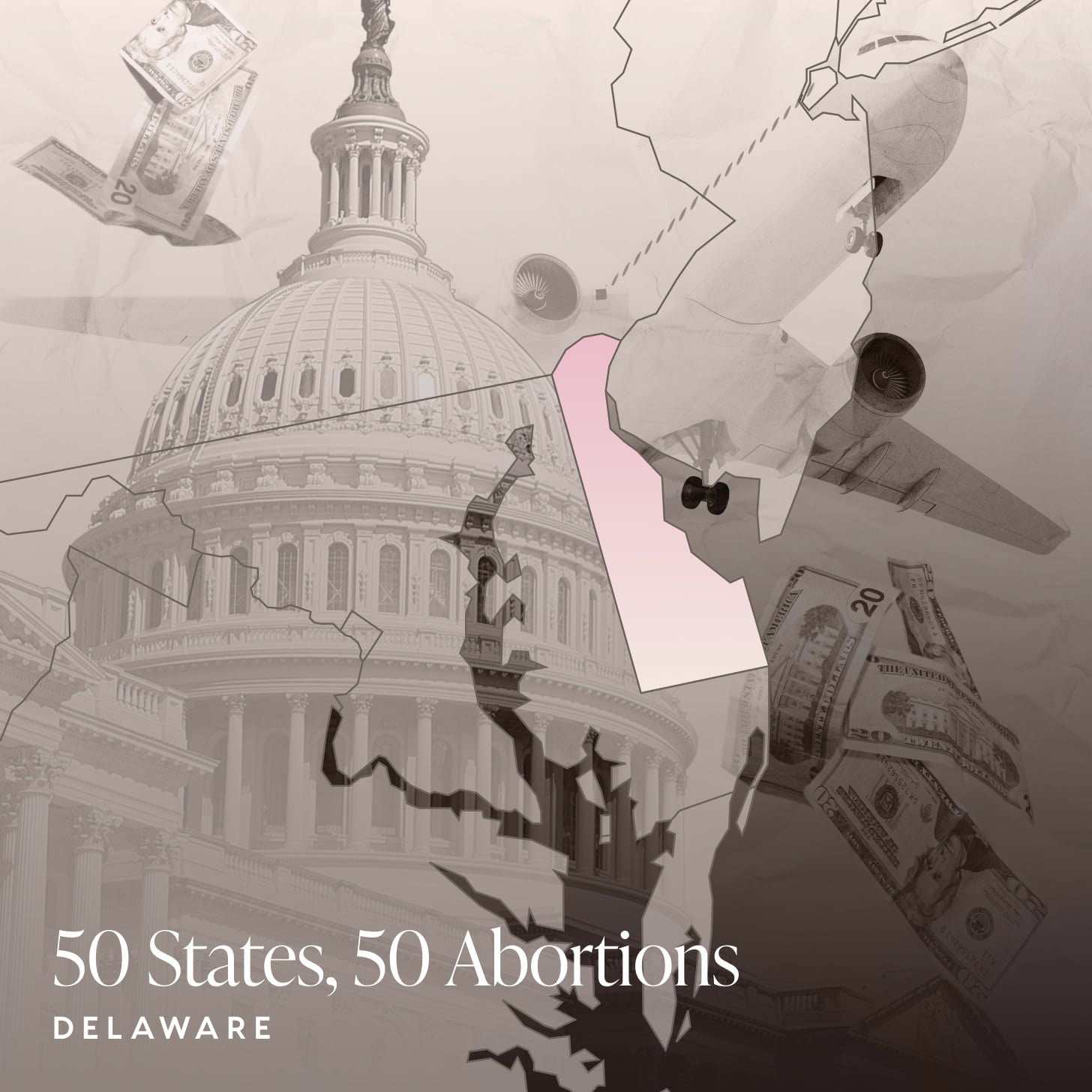 I was the 19-year-old daughter of a former Catholic priest when I got pregnant by my boyfriend. I was working part-time at a Delaware drugstore called Happy Harry's when I realized I'd missed my period, so I took a pregnancy test while I was on my shift, and it was positive — that's how I found out I was pregnant. So I immediately threw up out back and went home sick.

All my life, I had been raised Catholic. I went to an all-girls Catholic high school. At 16 years old, I had marched for life [in DC]. And so abortion wasn't even on my mind. [I was thinking,] would I keep the baby, would I give it up for adoption, would I have an open adoption? And those were pretty much the choices that I was laying out for myself. My thought of even considering an abortion made me feel like a hypocrite.

My boyfriend and I broke up during that time period. He really wanted to pretend it away and have an abortion, and I didn't. He started dating other people, and I was infuriated by the fact that we were in the same situation and he was just living his life. At that moment, I realized how different things were going to be for me.

When I told my older sister, who worked for a gynecologist, she got me prenatal vitamins and information pamphlets about open adoption. While I know she wanted me to have an abortion, she was never going to tell me that. She was going to support me in whatever decision I chose.

But one night while I was out with friends, my mom decided to go through my top bureau where I had all those pamphlets. She woke me up the next morning and basically said, "You better think about what you're doing with your life," and then turned around and walked out.

When I went downstairs, she was waiting for me. My mom, she just said, "I know what you're gonna want to do and not want to do, and it's your choice, but just know that you should think of abortion as an option." And I said with certainty, "I'm not having an abortion."

She assured me that it was ultimately my choice and that she would support me no matter what — but said that becoming a mother during my freshman year of college would essentially mean that my life would be over. My mom was never really a fan of being a mom.

She and I went back and forth, and I just kept saying, "I can't do it." But at some point, it started to make sense, and I said, "OK, but I'm not going to a clinic." She said OK and that she would start getting the money together. I remember the cost was $1,700, and she used cash to pay for it — she was a part-time substitute teacher. And we decided that we would not mention it to my dad.

The next morning after our talk, she called a doctor she knew who was maybe a family friend and scheduled a consultation. So the first time I ever went to a gynecologist, I was pregnant. The doctor was a 70-year-old guy, and I just remember looking at the ceiling as he examined me while he tried to be funny and tell jokes. It was really uncomfortable.

When he was done, he told me that I was a little more than eight weeks along. He said, "You only have until 10 weeks. So if this is something you want to do, we have to schedule it right away." I don't think Delaware had any laws restricting abortion after that point. I just know that I was told that 10 weeks and before, performing the procedure was an easy-peasy kind of thing, but after, it could be more complicated. I asked him if I would feel anything, and he said no and that I would be "knocked out as if someone hit you over the head with a mailbox." (Editors' note: There weren't any restrictions on abortion until viability in Delaware in the 1990s when this took place, and because protections for abortion were codified in the state in 2017, the same holds true today.)

My appointment was set for the next week, and I went to Christiana Hospital to have it done. The whole thing happened quickly and smoothly. All I remember is hearing the machine at the beginning and then being done.

My mom and sister made arrangements for me to go right to my sister's house after the abortion since we decided not to tell my dad about the pregnancy or the abortion. Like I said, my father had been a priest, and he left the priesthood for my mom. So there was definitely not going to be tolerance from him about the abortion — at least that was my perception.

However, I eventually told my dad. By the time I hit my late 30s, I worked up the nerve to tell him about my abortion. By then, he and my mom had gotten divorced, and he'd gone back to being a priest. But being honest about my abortion was something that I felt like I always needed to do because hiding it had created an emotional distance between us. When I finally opened up about it during one of our weekly hangouts, my dad was totally like, "Well, you know, it was your life, your choice." And he said, "You know, you live your own life; you make your own choices." And then we had another slice of pizza. There was no judgment from him.

After my abortion, I went home with my sister and her husband. They'd rented a bunch of movies for us to watch, and I really didn't think about the abortion. I was utterly relieved that I no longer was in that situation. And fortunately, the physical recovery was pretty easy.

I think emotionally, it goes back and forth. The following year, my sister had a baby, and I couldn't help but think, "What if?"

[Later,] I started taking a course about processing my abortion [at a crisis pregnancy center]. As I'm taking it, I thought, "This is horrible." Because the punishment it kind of put you through, that was an emotional torture. So when I said I was quitting, [they tried to say], "Well, you're not over it yet," and I was like, "No, I think you're making me relive and think about things that I never had." No one wants to think about those exact moments.

Now I own it. I'm proud of having an abortion, grateful to have had the choice to have one, and I know that it was the best decision for me at the time. I'm 48, and I never went on to give birth to any children because I was never sure I wanted to. But I am the mother of two stepchildren, and I love it.

Looking back on my experience, I will say that I had it pretty easy, having family support and not having to pay for my abortion. I was a white, middle-class young woman, and my mom could call the doctor, get me an appointment, get me into the hospital, and pay for it within 10 days. I'm so grateful that was my experience. But I know that's not everyone's experience, and the overturning of Roe v. Wade will only make this disparity even worse.

I'm grateful that in Delaware, we codified Roe and that we have the First State Abortion Fund to protect people if they want to come here and have an abortion from another state.