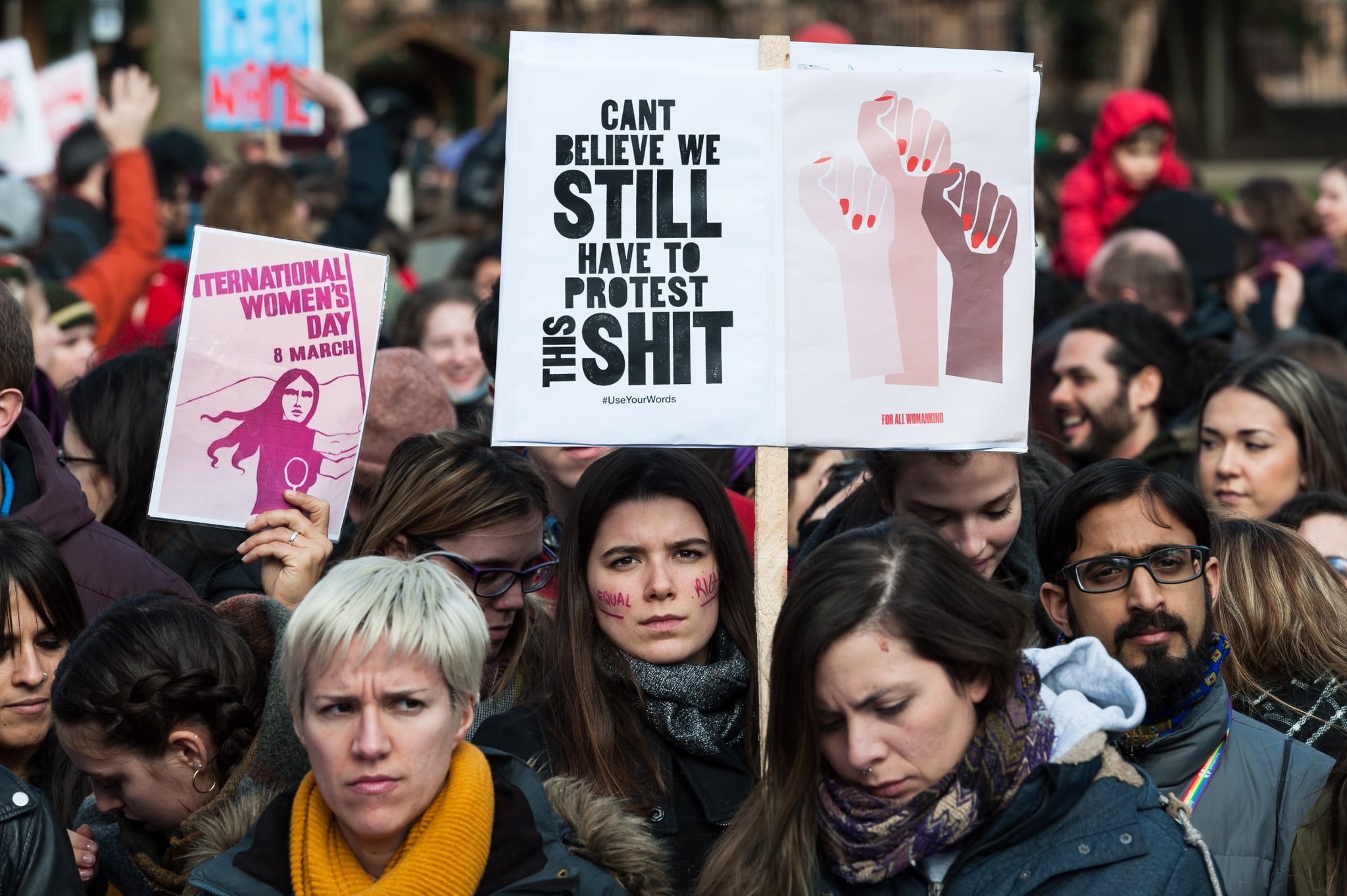 Women's History Month is meant to be a time for centering women. It's a time for celebrating how far we've come, sure, but more importantly, it's a time to push for change on the issues that still face women — particularly trans, Black, and women of color — every single day.

This year was different. This year, I watched Meghan Markle tell Oprah she has experienced suicidal thoughts after her abhorrent treatment by the tabloid media, which is sexist at best and blatantly racist at worst. Within hours, I listened as she was torn apart by men like Piers Morgan (and many men like him) on national television.

At the same time, I heard the screams of women calling for an investigation into the disappearance of Sarah Everard, who was abducted on a busy, well-lit street in South London. On streets that I too have walked in the dark, on my own, many times. I watched on in horror as police combed ponds and woodlands in search of any clue to her whereabouts and as women were told to not walk alone at night. As they arrested a police officer for allegedly committing the crime.

Along with the horror, and the sadness, I just kept thinking: I'm so tired.

Women are tired of walking home with keys between their fingers. We're tired of being told what to wear or not to walk alone at night. We're tired of crossing the road every time we see a man approaching us on a quiet street, even in broad daylight. We're tired of having to call someone on our way home "just in case something happens." Of taking the longer, better-lit route home. Of dropping pins and sharing Uber trips when the driver seems a bit sketchy.

This month, one that's meant to celebrate women's achievements, Australia has seen thousands of women slam their federal government. A government that has not only allegedly allowed rape and abuse to take place inside the walls of Parliament House for years, but has hidden crimes committed by the men they employ and silenced the women who have tried to report them. I won't speak for all women, but I will say that it certainly feels like we're sh*t out of luck when it comes to reporting crimes or holding perpetrators accountable.

This story isn't new, and I'm certainly not pulling back the curtain on an issue that's been hiding in the shadows until now. According to a survey by UN Women, 97 percent of women in the UK have been sexually harassed. Let that number really sink in — it's almost all women. And of the 1,000 women they polled, 96 percent of respondents who'd experienced harassment also said they didn't report the incident, with a further 45 percent said it was because they felt it would not change anything.

So, men, I'll say it again: the women in your life are bone tired.

We need you. We need you to share posts on Instagram about women not feeling safe, too. More importantly, we need you to speak to your friends about their disgusting behavior toward women. We need you to shut down the "locker room chat". Call them out. Or better yet, have the conversation before they ever do anything to hurt a woman in the first place.

Men, we don't just need you to talk about this issue: we need you to yell about it — because we've tried to fix it on our own and, newsflash, it's not working.