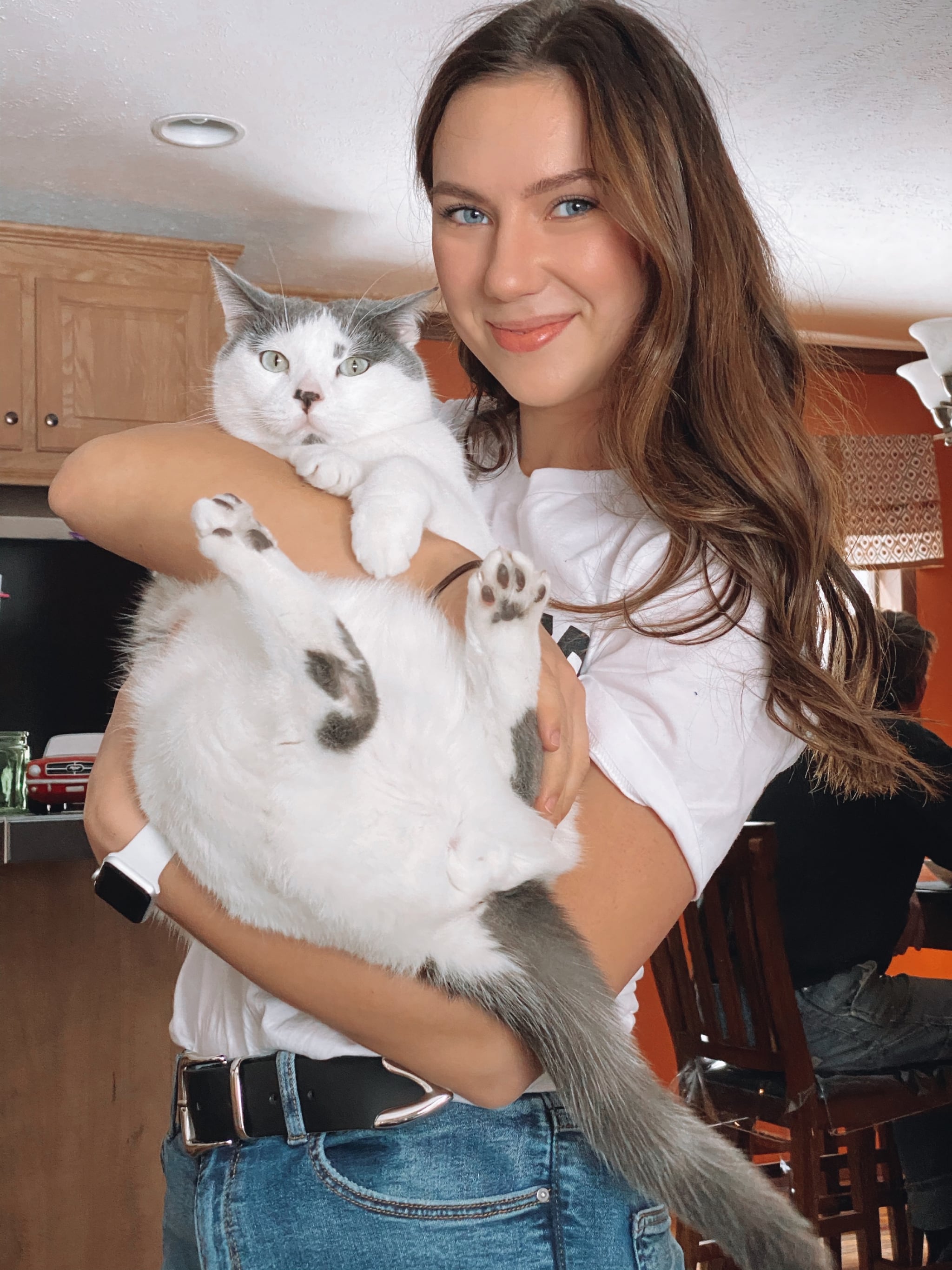 When I say that for the first 19 years of my life I wasn't a cat person, I cannot emphasize how much I truly disliked cats. I thought cats were weird, mean, miserable little things. My roommates at the time desperately wanted a cat for our college apartment, and I promised I would move out if they got one — yes, I was a major drama queen, and maybe a tiny bit of a brat. Regardless, I thought cats were totally the worst and I wanted nothing to do with them. Then one day, everything changed.

I was pulling into my boyfriend's driveway when the little white ball of fluff ran in front of me. When I got out to examine the situation, I realized a small litter of abandoned kittens were living underneath a shed on the property. I tried to coax them out with no avail, and unfortunately couldn't reach them. My boyfriend, Ethan, thought to put out some pulled chicken and water in hopes that the kittens would be hungry and come out. There was no mother around; just three abandoned little kittens who needed help. As soon as I saw their dirty faces and swollen bellies, I was determined to save them.

The kittens kept coming back to the chicken and water we had set up, but would run into the woods or under the shed as soon as we'd open the house door to get close to them. They didn't trust people, and were terrified of us. Each time I'd try to rescue them, they'd take off before I even had a chance. I'd spend hours looking out the window just waiting for them to come to food and water we had set up, watching for the opportunity to grab them. The closet we got led to Ethan being bitten by one of the feisty kittens, and me getting scratched. It felt like they were going to run away before we got the chance to get them help. I was feeling desperate, devastated, and out of ideas.

One morning, around four days after I had first spotted the kittens, Ethan's roommate woke up to a surprise - one of the kittens had found refuge in the garage. The kitten was in rough shape: ticks in his face, a bloated belly filled with worms, and dirt all over, and into his eyes. He was terrified and sick, but Ethan's roommate was able to place him with a family who took him to the vet right away, and moved on to rescuing the other kittens. A live trap was set, and another kitten was saved. He too was covered in dirt, ticks, and had worms. As soon as I saw him in person, my heart completely melted and I knew I had to keep him.

Related:
All the Important Life Lessons I Know, I've Learned From My Cat

I gave him a bath and took him to the vet immediately. Once I found out he was actually a he, (Ethan was 100 percent convinced he was a girl), I named him Finn and moved him into my apartment. My roommates fell in love with him, and we had so much fun watching him grow from a sick little kitten into a 14-pound full-grown cat. Finn gave me a sense of silent comfort and companionship that I was desperate for. Being able to snuggle with and pet something so sweet when I was having a stressful or anxious day made such a huge difference in how I handled my stress. Knowing that something depended on me for food, water, and shelter gave me a new sense of self and feeling of importance in the world. Something so small and special leaned on me for survival, and it made me feel loved.

Finn quickly turned into one of the most important things in my life, and being able to go to bed with his loud purr and sweet little face every night truly changed me for the better. He loves to go outside on his leash, to claw at my mom's leather couch, to eat treats, and to sit with us at the dinner table and beg for food. I'm not sappy and emotional about much, but Finn is honestly family and he gave me a sense of purpose that I didn't even know I needed. In the end, we really saved each other. So, yes, you could say I'm a cat person now.