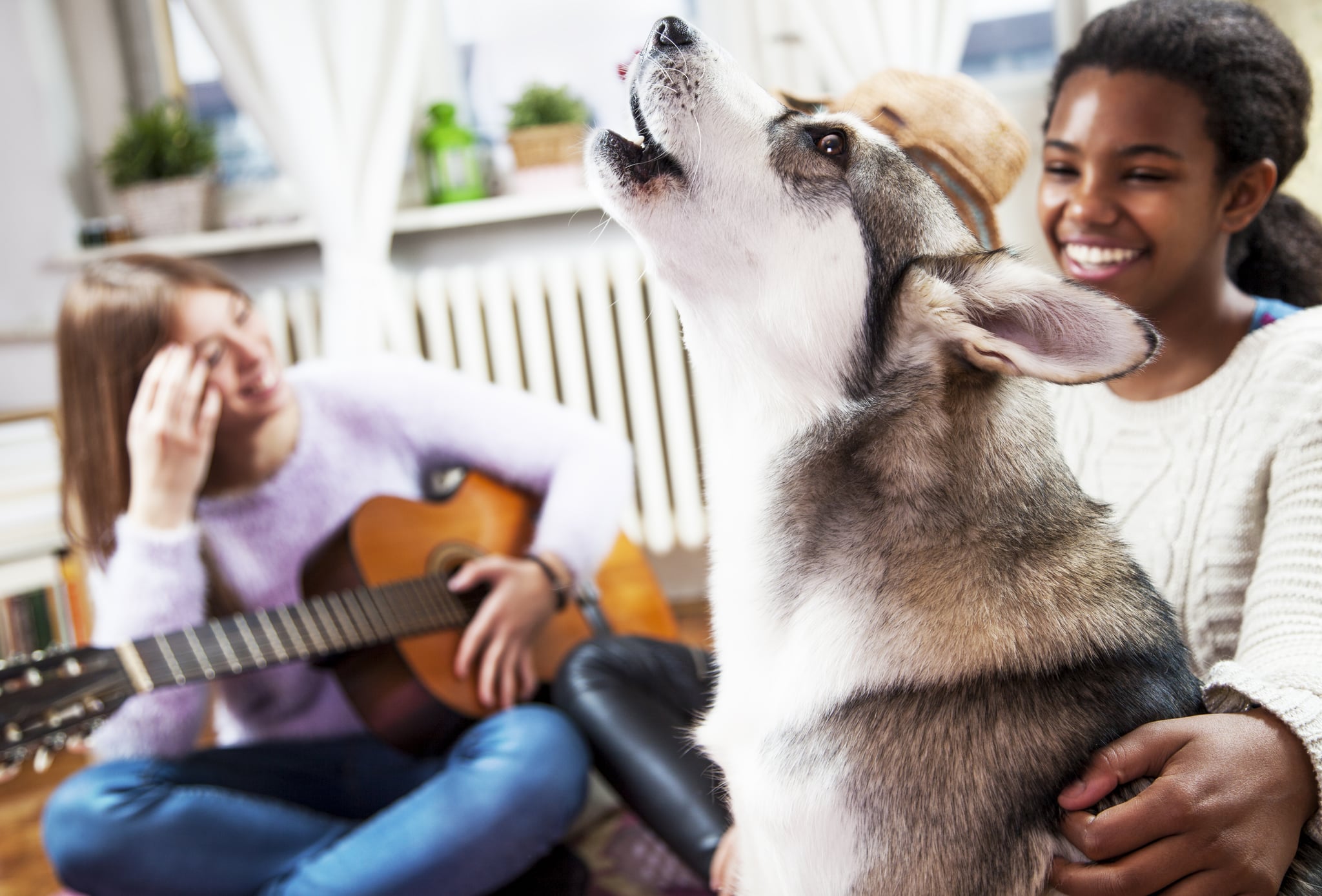 When I saw this TikTok of a golden retriever singing along to "Driver's License," I blasted Olivia Rodrigo on repeat for days. Unfortunately, my 3-month-old golden retriever pup did not suddenly become a four-legged karaoke star (fingers crossed she picks it up soon!), but so many dogs online have. Dogs of different breeds love singing to various songs, a trend that TikTokers are capturing and sharing to the delight of viewers everywhere. Why do dogs love to sing, and — more importantly — how do I teach my furry friend this trick? POPSUGAR spoke with veterinarians to find out.

Why Do Dogs Sing?

Experts are actually still stumped as to why this behavior happens. Laura Robinson, DVM, medical advisor to Pawp, told POPSUGAR that it could be an "evolutionary response" that is closely related to the dog's common ancestor, the wolf. "Wolves howl to communicate to each other and call to each other, and sometimes the high-pitched music makes that evolutionary trait come out," Dr. Robinson said. "Others think they may howl because the high pitch may hurt their ears, or they are trying to alert you to something or want attention."

So, is singing a sign of something bad? Most of the time, no. "If you see your dog howling along with certain songs or melodies, it's perfectly normal," Georgina Ushi, DVM, a veterinary writer, told POPSUGAR. "When this happens, your dog isn't in pain or anything. If they were, they would try to run away from the music or cover their ears. Some tunes may sound familiar to them and they are just trying to mimic it and have some sort of conversation."

Based on Dr. Ushi's response, it's possible that Olivia Rodrigo sounds like a doggy's best friend from the neighborhood dog park, and they're simply trying to socially connect when they hear her voice.

What Dog Breeds Are More Likely to Sing?

As evidenced by TikTok, dogs of many different breeds enjoy singing. "All dogs can have this behavior," Dr. Ushi said. "However, some breeds like Huskies, Malamutes, and Samoyeds are most likely to do so, and actually, quite often." If you want your dog to become TikTok's next four-legged superstar, you can teach them how to sing like it's a new trick. "You can teach them with commands and by rewarding them every time they howl to a song," Dr. Ushi said. "If they don't do this at all, YouTube videos with other dogs howling to songs may encourage them."

When Does Doggy Singing Become a Problem?

Despite how cute and adorable seeing your dog singing can be, sometimes it can be a cry for help. "It can be hard to say whether dogs enjoy singing," Dr. Robinson said. "In some cases, they may be doing it because they enjoy it, or it hurts their ears and they want you to stop."

Dogs' hearing is much more sensitive than ours, so it's recommended that you try not to turn up the volume too high. Additionally, some dogs might react differently depending on the type of music they're listening to. According to a 2018 study by the Scottish Society For the Prevention of Cruelty to Animals (SPCA), dogs tended to favor reggae and soft rock, and weren't too keen of music featuring violins due to the instrument's high frequency.

It's all fun and games unless your dog is miserable. For the most part, our veterinarians agreed that dogs who sing are just channeling their wolf ancestors. However, sometimes it can mean your dog craves attention or believes the music is too loud. Always be sure to pay attention to your dog's needs first before you film an adorable video of your talented furry friend.