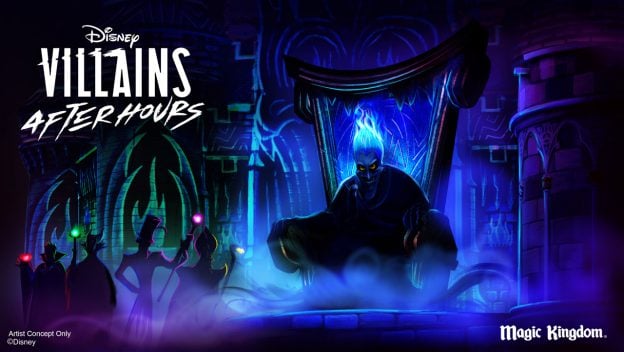 When the princesses are away, the villains will play. Disney's most dastardly villains are creeping out from the shadows of Disney World and taking over the Magic Kingdom this Summer in a chilling, late-night spectacular — and you've never seen Maleficent like this before.

Disney villains are the characters we're supposed to detest, but what if they had control over the happiest place on Earth? As part of the park's annual Disney After Hours event from June 6 to Aug. 8, guests are invited to walk on the wild side and experience the Magic Kingdom through the eyes of Disney's most nefarious crew — but what kind of dark magic do they have hidden up their sleeves?

During the park's limited-time event, Hades and Meg from Hercules will set the stage of Cinderella's Castle ablaze in an all-new production called Villains Unite the Night, with special guest appearances from Jafar, Dr. Facilier, and Maleficent. Guests will also be able to experience special villain-inspired enchantments on rides like Space Mountain and Pirates of the Caribbean, as well as enjoy low wait times on 20 of the Magic Kingdom's most popular attractions. Dibs on the Haunted Mansion!

The coolest part? Maleficent's dragon will be creeping through the park in parade float form and breathing fire wherever she goes, making for a sinister surprise and some amazing selfies. As for the food? There will be desserts, drinks, and dishes inspired by The Red Queen, Cruella de Vil, Maleficent, Hades, and Dr. Facilier, and even Emperor Zurg will be available to guests who attend this special event.

But there is one important thing to note: while all of our favorite villains will be entertaining guests into the wee hours of the night, they will not be available for character meet and greets during Disney After Hours. The event runs from 10 p.m. to 1 a.m. on select nights, but park guests are invited to enter as early as 7 p.m. to enjoy some food and fireworks before the true show begins. Tickets go on sale on April 29 and can be purchased in advance for $139 per adult or child, plus tax, or purchased on the day of the event for $144 per adult or child, plus tax.

Related:
Calling All Poor, Unfortunate Souls: A Series About Disney Villains Is on the Way

Tickets are limited, so swipe 'em up ASAP, and check out the full date list for the Villains After Hours event ahead: