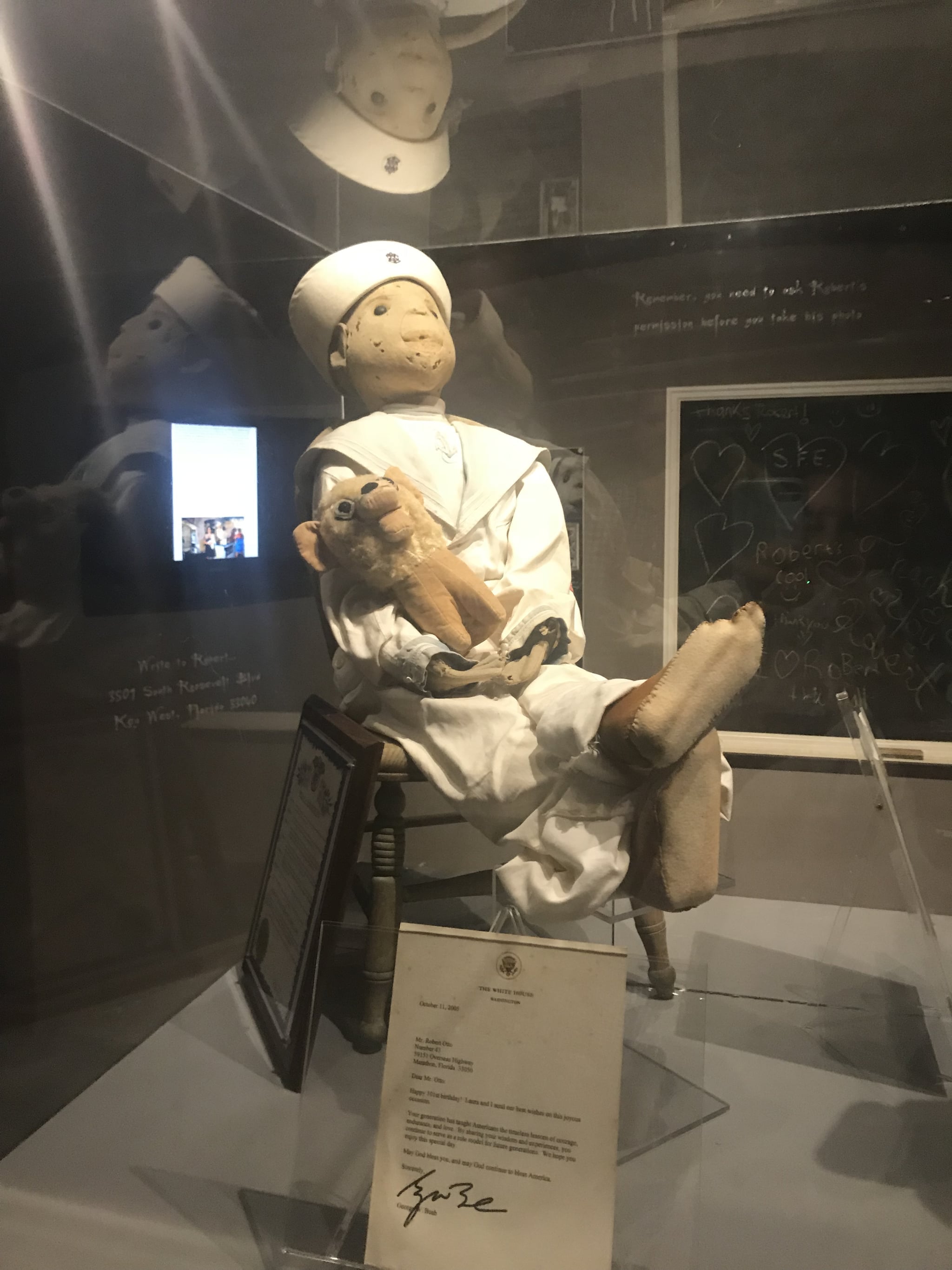 I'm a relatively superstitious person. I would never walk on someone's grave in a cemetery, I believe in ghosts, and I'm careful to not walk under any ladders. So while I was on my honeymoon in Key West recently and heard about a ghost tour that involved Robert the Doll — a famously haunted doll that brings bad luck to those who visit him — I was pretty intrigued.

For an inanimate object, Robert is pretty well-known. He's been featured on several TV shows and is even toted around to various conventions that center on the occult. Eager to see what all the fuss was about, my husband, Chris, and I booked a tour with a company called Ghosts & Gravestones, which included a stop at the Fort East Martello Museum where Robert resides. While the tour was awesome, our brief encounter with Robert was . . . less than ideal. Why? Well, because he "haunted" me for about 36 hours afterwards.

In order to understand the full extent of this, it's important to know Robert's sordid past. Originally given as a gift to Eugene Otto, an author and painter, by his grandfather in 1904, the two were instantly inseparable. It's said that Robert the Doll's outfit was even modeled after one Eugene wore. As a boy, Eugene would often blame the doll for accidents and misgivings, claiming, "Robert told me to do it." Seems like somewhat normal little kid behavior, right?

According to our tour guide, the real trouble started when a woman who worked for the Otto family was fired abruptly without cause. But rather than packing her bags and leaving, she reportedly used voodoo to put a curse on the doll as a form of revenge. And while it may seem pretty far-fetched to some, others believe it actually worked.

"Once he was put on exhibit, cameras and electronic devices malfunctioned in his presence, and soon letters began arriving addressed to the doll offering apologies for disrespectful behavior or asking forgiveness."

As an adult, Eugene became an artist. Considered by many to be "eccentric," Eugene returned to his family home in Key West with his wife, Annette Parker, after they got married in 1930. And despite being an adult, Eugene's love of Robert never wavered (legend has it that Robert sat right next to Eugene while he painted). Annette obviously wasn't a huge fan of her husband's best friend, and vice versa, so once Eugene died in 1974, Annette left Key West. She left Robert behind in the attic of the home, where he was found years later by the home's new owners. While strange things had often happened in Robert's presence before — people hearing voices, noises, and other unexplained sounds — it wasn't until he was donated to the Fort East Martello Museum in 1994 that his less-than-kind attitude went full-scale.

Before walking into the museum to get a peek at Robert, the tour guide gave us some strict rules to follow: you must greet and introduce yourself to Robert; if you want to take a photo of him, you must ask first; and you can't leave the museum without saying goodbye. While a bit weird, that all sounded doable to Chris and me, so we did as we were told. After snapping a few photos, we learned about what happens to people who don't follow the rules or poke fun at Robert. A nearby TV showed thousands of letters from people from around the world who experienced terrible luck after rubbing the doll the wrong way.

According to some of the letters, visitors have been met with all kinds of misfortune, from getting burned by hot water to missing their flights to — yep — even getting divorced. "Once he was put on exhibit, cameras and electronic devices malfunctioned in his presence, and soon letters began arriving addressed to the doll offering apologies for disrespectful behavior or asking forgiveness," says the website. "Letters continue to arrive daily."

As a respectful visitor, I thought I was off the hook. I followed the rules and was genuinely interested in learning about him. But boy, was I wrong. I made ONE comment about a grown man carrying around a doll, and my fate was sealed. As soon as I woke up the next day, the bad luck began. First, our flight home was delayed. Then, we were forced to rebook our flight because the plane was too heavy, resulting in us having a five-hour layover and getting transferred to another connecting flight. While both of these things were annoying, I also knew they happen sometimes. It couldn't have been because of a doll, right?

I realized that Robert might actually have had it out for us when we finally landed back home around midnight. The problem? Our luggage never showed up. We were told to go home and that the suitcase was probably on the next flight in. Fast forward to the next morning — still no sign of the bag. And no one on either airline that we used could locate where the suitcase was. It was simply missing without a trace. Frustrated and near tears, we decided to give into our superstitions and write letters to Robert in the hopes of reversing whatever bad luck he gave us and finding our lost bag. 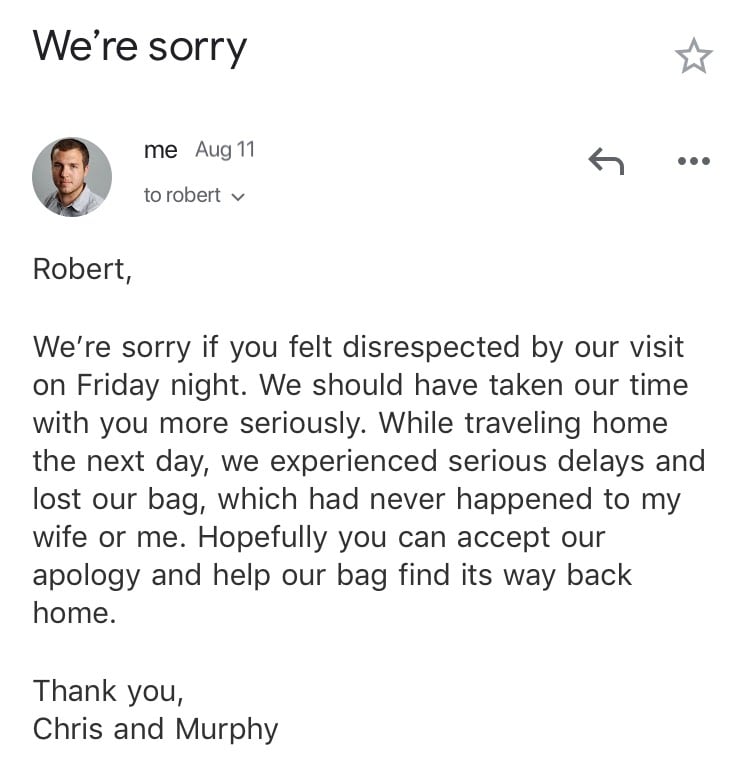 After sending them, we went to bed and promptly called the airlines at 9 a.m. when they opened. And guess what? We were immediately told where our bag was: back in Key West with an airline we didn't fly with. While things were still somewhat up in the air, our luck seemed to completely change as soon as we apologized to Robert. Coincidence? Maybe. But do we regret writing letters to a doll just to be sure? Absolutely not!

I had heard of something similar called Pele's Curse, which is the belief that if you take anything natively Hawaiian — like a rock or sand — out of Hawaii, you'll have bad luck until it's returned. And if you look into it, you'll find thousands of accounts from people who did just that and experienced such severe bad luck that they sent the lava rocks back to the island immediately. So, we knew we couldn't be too careful.

Although I might be pushing my luck writing this story — God knows I don't need anymore bad juju! — it's been said that Robert loves to be the center of attention. Fingers crossed this keeps me in his good graces!

Chris Pratt
The Avengers Assembled Over Twitter's Chris Discourse — Where Was This Energy For Other Costars?
by Mekishana Pierre 9 hours ago