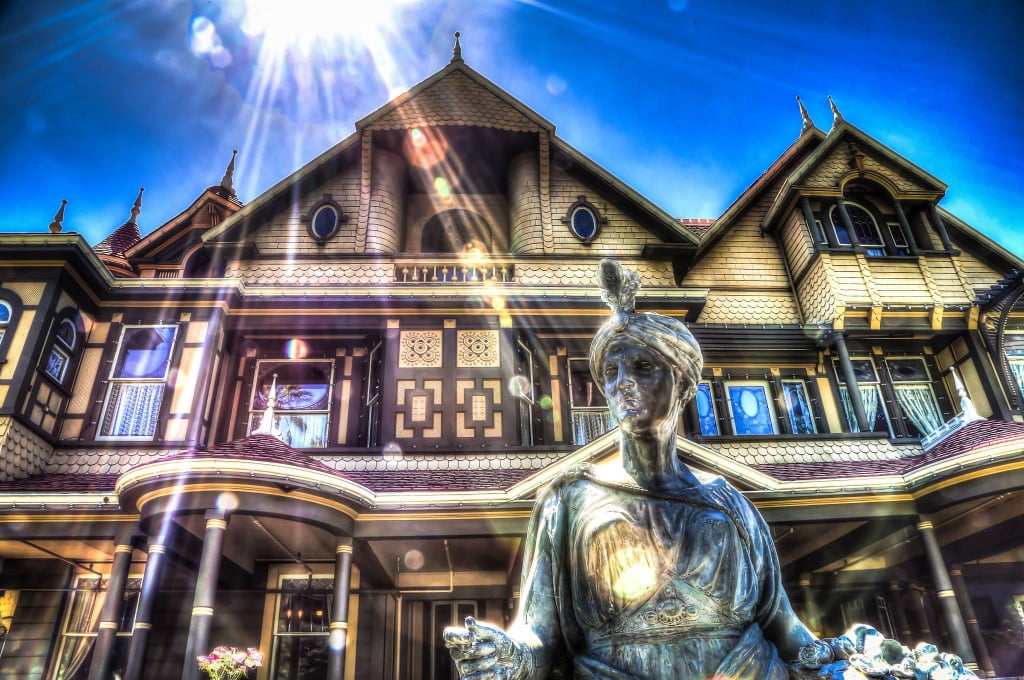 The Creepy (and Inexplicable) Details About the Real Winchester Mystery House

'Tis the season for haunted houses, creepy characters, and spooky stories — and one former residence of the rich and famous in San Jose, CA, has long offered quirky and spine-tingling tales to those who dare visit the Winchester Mystery House. And thanks to the recent introduction of the first all-new tour in two decades, which welcomes guests into rooms never before open to the public, including the eerily named Witch's Cap, and an upcoming paranormal period piece starring Helen Mirren as homeowner Sarah Winchester that shot on location, there has never been a better time to look for ghosts at the Winchester Mystery House.

The 24,000-square-foot American Queen Anne Revival mansion is one of the most peculiar and sprawling estates in the world with its nine kitchens, 52 skylights, 160 rooms, 2,000 doors, and 10,000 windows. It sits across a very busy street from San Jose high-end retail and dining destination Santana Row. It's known for its abnormal architecture, like stairways to nowhere, a window in the floor of the south conservatory, a room without a ceiling or floor, doors that open into walls, a cupboard with a half inch of storage space, the recurring spider web motif, and curious instances of the number 13, like the baker's dozen of hooks on the walls in the séance room. (Oh, and yeah, Winchester created a room just for convening with spirits.)

Related:
50 States of Scary: The Most Terrifying Haunted Houses You MUST Visit in America

Perhaps the strangest thing about the Winchester Mystery House, which in Winchester's day was called Llanada Villa, is why the widow built it this way after she moved to the Bay Area in 1885 following the death of her husband and child. It started out innocently enough as a two-story, eight-room farmhouse surrounded by commercial orchards she operated (the savvy businesswoman also owned a number of investment properties), but the heir to the rifle fortune believed she was being haunted by all the souls ended by her family's guns, including the model nicknamed "The Gun That Won the West," and that the only way to appease them was to keep adding on.

Perhaps the strangest thing about the Winchester Mystery House is why the widow built it this way.

This is why construction never ceased, with a brief exception after the catastrophic 1906 San Francisco earthquake, for 38 years. At one point, the house, built without any blueprints, was seven stories tall and featured the latest and greatest technology, including first residential electric elevator on the West Coast. The price tag for her structural penance was more than $5 million, then an astronomical sum, but after her death in 1922, it was valued at a mere $5,000 and sold at auction for $135,531.50.

The new owner started offering tours the following year, and since then, more than 12 million people have wandered through the dark corridors, elegant rooms, and unfinished quarters. The aforementioned new experience, the Explore More Tour, which is only available in tandem with the basic Mansion Tour for people over the age of 9, opens up areas of the house that have either always been off limits or which have been closed for decades, like the front porch, the fanciest north turret bathroom, the aviary, the north wing above the ballroom, the elevators, balconies, her personal hideaway, a vertigo-inducing cross bridge, a boiler room, the registration hall, the Crystal Bedroom, and various unfinished spaces where work stopped when Winchester passed away. Participants also get to sign the guestbook, a practice that hadn't been done in ages, and enter through the ornate front doors, a first for groups. Even Winchester eschewed the formal entry.

Related:
The Chilling Story Behind the Winchester Mystery House and the Woman Who Built It

Also important to note, given that this add-on will cost most adults an extra $47, Explore More guides are better versed in the history, lore, and alleged ghost activity than the standard ushers. Because each session is limited to 12 people or less, it is a lot easier to ask questions. The most recent docent we were assigned had been at work when the production for Winchester: The House That Ghosts Built, due to hit theaters in February 2018, came to town and she regaled the group with spoilers from the shoot (i.e., at least one scene takes place in a library which doesn't exist in real life, an action sequence was filmed on the roofline, and Mirren rang the bell in the tower to signal the completion of the last shot). Jason Clarke (Zero Dark Thirty, Everest), Sarah Snook (Black Mirror), and Angus Sampson (Mad Max: Fury Road) join the Oscar winner in the thriller inspired by Winchester, the house, and real events.

While the new offering dives deeper into the supernatural sightings than the basic option, those who want to focus on all the reasons Time labeled it one of the top 10 haunted places might be better served by the after-dark Halloween Candlelight Tour. Offered through Oct. 31, a demented caretaker will take you through with only a few flickering candles to light the way. With any luck, the former handyman with jet-black hair and a spectral wheelbarrow will stop tinkering with the ballroom fireplace long enough to say hello.

The repairing revenant is just one of the many phantom residents and unexplained phenomena reported on a regular basis by visitors and employees alike. Scroll through the slides for more on the property's possible poltergeists and reasons to make a Winchester Mystery House call before pumpkin spice lattes are out of stock.

Travel
Actor and Former Travel Host Henry Golding Shares His Favorite Destination: "It Was Remarkable"
by Lauren Harano 3 days ago

Pet Advice
Maxbone Makes Everything My Dog Needs to Travel, Starting With This Stunning Carrier
by Morgan Ashley Parker 6 days ago

Travel
This Couple Went to the Top of Yosemite to Exchange Handwritten Vows, and Look at Those Views
by Lauren Harano 6 days ago