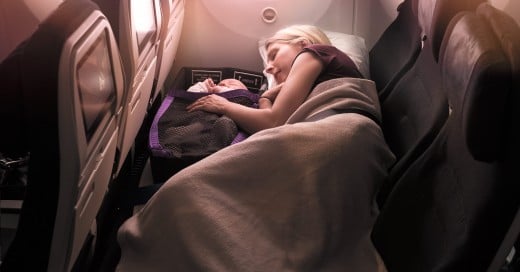 In an effort to make flying with children as easy as possible, Air New Zealand recently launched a revolutionary concept that changes the game called "skycouch," and yes, it might make your traveling-with-kids-induced headache subside a little quicker.

So what exactly is a skycouch? It's a row of three seats in economy class that lets you make the most of the space. It can function as a mini play area for your kiddos or gives Mom and Dad room to stretch out in, so essentially, it's like expanding your tight little seat into a living room couch — and we don't hate it.

Related:
I Wish I Hadn't Let Fear Stop Me From Traveling With My Son

The skycouch also has a few perks for babies, specifically. The three seats can be converted into a flat space, and "The Skycouch Infant Harness, Belt, and Pod" is complementary to every passenger with a baby on board. The pods and harnesses allow little ones to sleep horizontally for the duration of the flight while still being safe and secure.

Air New Zealand also made an important kid-centric upgrade to its "Skycouch Cuddle Belt," which was initially intended to let two adults or one adult and one child sleep side by side. Now, the airline has made it possible that two children can have the same experience sans grown-up.

According to Air New Zealand's website, parents can expect skycouches to be available starting in mid-2018. 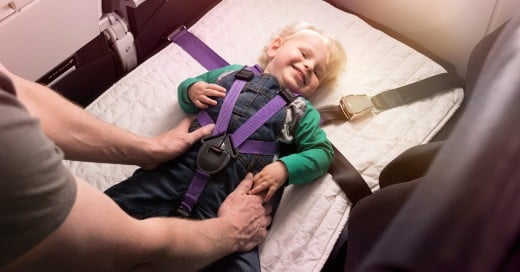 Summer
Ready to Hit the Open Road? Here Are the 10 Best US Road Trips to Take This Summer
by Lindsay Paige Stein 2 hours ago

Babies
3 Senators Proposed a Bill to Ban the Sale of Crib Bumpers, Which Increase the Risk of SIDS
by Alessia Santoro 8 hours ago

Travel Inspiration
Wondering Where Who Killed Sara? Is Filmed — Here's All the Info You Need
by Lauren Harano 3 weeks ago