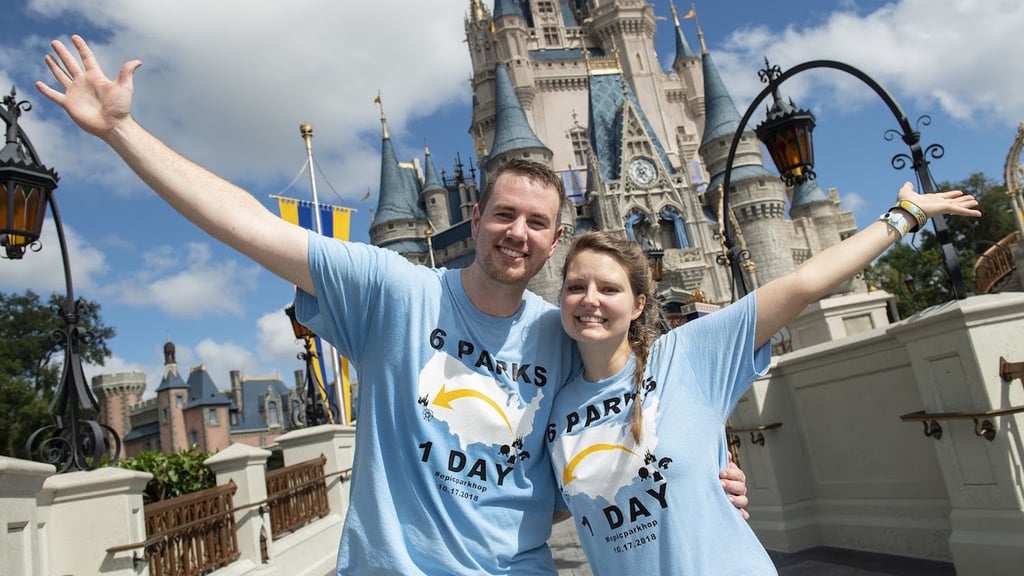 Anyone who's visited a single theme park at Walt Disney World or the Disneyland Resort knows how exhausting the experience can be between the long lines, thrill rides, and considerable walking. That's why it's especially shocking that one brave couple decided to visit all six US theme parks in just one day! On Oct. 17, Heather and Clark Ensminger started their day at Disney's Hollywood Studios in Orlando, FL, and ended it at Disneyland in Anaheim, CA, in a challenge they've referred to as the Epic Park Hop.

Here's exactly how it went down: Heather and Clark arrived at Hollywood Studios as the sun was coming up thanks to the park's Early Morning Magic program. After enjoying a few Toy Story Land rides, they visited Epcot, where they went on Spaceship Earth. At Magic Kingdom, they met Mickey Mouse and went on the Seven Dwarfs Mine Train. Heather and Clark then ended their tour of Walt Disney World at Animal Kingdom.

The adventure obviously didn't end there. After a casual five-hour flight to Los Angeles and about an hour drive to Anaheim, Heather and Clark quickly rode Guardians of the Galaxy — Mission: Breakout! at Disney California Adventure before the park closed at 9 p.m. Heather and Clark then ended their fun-filled, albeit chaotic, day at the original: Disneyland.

Related:
If You're Not Going to Disneyland in the Fall, You're Seriously Missing Out

Though ambitious, the challenge — which stipulated that they visit at least one attraction and eat something in each park — was feasible for the couple and parents of four. Heather and Mark told the Disney Parks Blog they once visited Walt Disney World six times in a year. It also helps that Heather is a park expert and travel agent for Lost Boys Adventures.

Clark surprised Heather with the idea around the one-year anniversary of her father's passing. "As the anniversary of his passing got a little closer, I was sort of having a hard time," Heather said. "Unbeknownst to me, my husband started planning this special trip to surprise me." Once she caught wind of his plans, Heather helped with the final arrangements.

"We've experienced tons of pixie dust over the years."

While it looks like a whirlwind 24 hours, it doesn't seem like the Epic Park Hop was enough to make Heather and Clark want to take a break from visiting the parks. "It's the magic," Heather said about their love of Disney. "We've experienced tons of pixie dust over the years — the cast members always go out of their way to make things special." Clark added, "It's just been a dream come true." Ahead, follow along with Heather and Clark's day at Disney — all of the Disneys.

Related:
How to Be the Very Last Guest in Disney World at the End of the Day
0
previous images
2
more images
Previous Next Start Slideshow
This Devoted Disney Couple Visited All 6 US Parks in a Day, and Excuse Me, HOW?! originally posted on POPSUGAR Love & Sex
Walt Disney WorldDisneyTravelDisneyland
Around The Web

Disney
Take Your Family to Disney Virtually With Its Newest Parade, "Magic Happens"
by Alessia Santoro 9 hours ago

Food and Activities
Disney Has Free Classes, So You Can Learn to Draw Mickey, Genie, and Elsa!
by Megan duBois 1 day ago