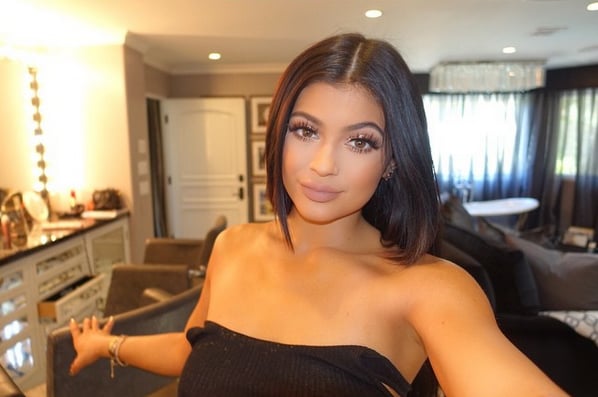 Every Single Beauty Product You Need to Look Like Kylie Jenner

Kylie may just be the most beauty-obsessed sister in the Kardashian-Jenner crew, but she has kept her famous lips sealed when it comes to the top products in her routine. We've been starving for knowledge, leaping at the occasional tidbit shared about Kylie's makeup favorites — and we're not alone. Just a mere mention from Kim of one of her sister's go-to lip liners (MAC Cosmetics Lip Pencil in Spice, naturally) caused it to sell out around the world.

It seems that Kylie was just waiting for the right opportunity to reveal her routine, because she confessed every last product to Bee Shapiro for The New York Times, as well as spilling her regular regimen to fans of her app. Not only does Kylie get her false eyelashes at CVS, she's also hooked on Neutrogena face wipes and Sephora masks, proof that you don't have to spend like a celebrity to copy their look.

She also bravely shared who her favorite dermatologists are for her complexion and her plump pucker. While you may assume that she's addicted to her plush pout, her reasoning behind getting Juvederm may betray otherwise. "I would recommend that anyone who gets it done go for a filler that lasts only two to four months," Kylie told The New York Times. It's annoying to keep going back, but you have the option of stopping it." Smart move, Kylie!

Whether your BFF keeps up with the Kardashians more than she does with her own family or you're the one racking up ludicrous charges due to your obsession with the sisters' apps, a pouch filled with the following beauty products would be the ultimate Kylie-approved holiday gift. Read on and start shopping!