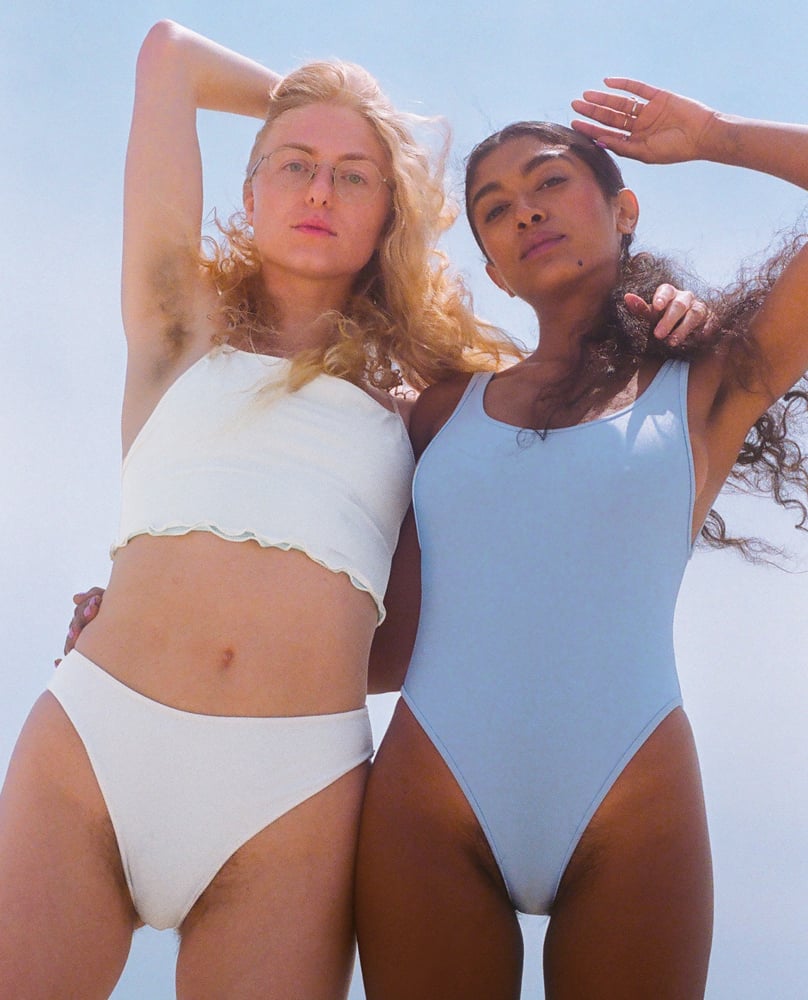 For decades, body hair was only deemed "acceptable" by society if it was grown by a man. Women, on the other hand, have been conditioned by media to shave their legs, armpits, and pubic hair. Now, after years of shaming (and thanks to body-hair-positive razor brands like Billie educating people on gender inequalities like the "pink tax" and celebrities openly discussing this double standard), the public perception is finally changing — and the LGBTQ+ community is leading the charge.

For many queer people, body hair is integral to their gender expression. I stopped shaving during my sophomore year of college, which was the same year that I came out as queer. Part of what led to my decision was the realization that I was never shaving for myself; I did it because I felt obligated to.

Growing up, I shaved to be perceived as "normal" and "civilized" through the eyes of other people. When I started puberty, it was quickly instilled in me by my parents, my peers, and the media I consumed that I must remove every last trace of hair on my body. Having smooth skin 24/7 was the only female beauty standard that I ever saw reflected in fashion magazines and pop culture. I was under the impression that shaving was not an option but rather a requirement.

For nearly a decade of my life, even the slightest hint of hair on my body would trigger shame and disgust. If I ever planned on baring my legs or armpits in public — whether it be on a date, at a meeting, or for a nighttime outing — the razor would always come out. Being seen in public without shaving became my greatest nightmare. It wasn't until I went to college and met other women who flaunted their leg hair proudly that I realized not shaving was an option.

Once I shed my preconceived notions and started growing out the hair on my legs and armpits, it was liberating. It felt symbolic of not only my queerness but also my newfound love of my body.

Many other queer people share in this experience. Countless celebrities who identify as LGBTQ+ — from Amandla Stenberg to Rowan Blanchard to Miley Cyrus — have publicly embraced the hair on their bodies.

In a video by self-identified lesbian YouTuber Rowan Ellis, titled "Why I Don't Shave My Legs," she says: "It wasn't until I started to think about [shaving] really critically and realize that I didn't actually shave my hair all the time. I shaved my hair when people would be able to see my hair. I didn't shave it in winter when I was wearing jeans all the time and the only person who would see my legs was me. When you think about it like that, it's like, 'Oh, I'm definitely doing this for other people.' We live in a society in which the way that people view us has an effect, and I think for a lot of people that's reason enough to remove their body hair, that it might affect how people see them in a negative way. But for me, it was like, 'Why am I doing this?' It wasn't until I was in these spaces with queer women specifically that that became something that I was able to fully embrace and be pretty open about."

Jesse Ludington, a lesbian poet and writer, told me that she didn't realize not shaving was even an option until she got to college. "It had been ingrained in me that shaving was simply what women had to do," she said. "The patriarchal ideal of a woman is someone who is always perfectly smooth, so, in a way, I feel like not shaving my legs can sometimes be a way to signal that I don't adhere to the patriarchal model of womanhood."

In a 2017 study from Mintel, 23 percent of women reported that they didn't shave. Five years later, I can only assume that number is now much higher, especially because the study never mentions queer women. As an Autostraddle contributor wrote: "Nobody loves f*cking up the patriarchy and gender expectations like queer women and folks."

It must also be noted that not everybody's journey is the same. Kennedy (whose name has been changed to protect her identity), a trans femme musician, told me that while she is not a fan of shaving, her body hair can still trigger dysphoria. "I used to get dysphoric about having body hair and would shave it all off every other weekend or so," she says. "As I've progressed with HRT and have been socially isolated because of the pandemic, I've thought less and less about it. I'm currently at a point where I prefer not to have it, but that desire doesn't outweigh my hatred for actually shaving it off."

The fact that women are expected to shave while men are not also contributes to Western culture's unfair infantilization of women. When I asked Kim Elsesser, PhD, a researcher and the author of "Sex and the Office: Women, Men and the Sex Partition That's Dividing the Workplace," why women feel obligated to shave for other people, she says, "While I certainly don't believe that those who shave think about this on a conscious level, encouraging women to appear like young, prepubescent girls is not very empowering."

Maura P. Quinlan, MD, an ob-gyn at Northwestern Medical, agrees: "A lot of my patients feel obligated to shave their pubic hair, and I try to encourage them not to. I hope that if more women can see celebrities like Miley Cyrus embracing their body hair, then it will open up a possibility for them to leave it as well. There's something very freeing about authenticity, especially with millennials and Gen Z."

While LGBTQ+ women and nonbinary folks seem to be driving the body-hair-positivity movement, what I hope it achieves is that more women overall will recognize that shaving doesn't have to be a requirement. I also hope that the growing number of people embracing their natural body hair will show young girls everywhere — straight and queer alike — that whether or not they decide to shave, what's important is that they feel empowered knowing it's their right to choose.

Tech News
"The Sims" Fans Are Clapping Back at Haters Criticizing New, Inclusive Characters
by Taylor Andrews 16 hours ago