If you thought Will Smith's partially shaven topknot ponytail as Genie in the Aladdin reboot looked strange, seeing him with Cardi B's hair is approximately 40 times stranger. The 50-year-old actor and 26-year-old rapper just fell victim to a fan's very precise face-swapping skills, and the results are simultaneously hilarious and harrowing. In a now-viral video shared by both stars on social media, footage from Cardi's December 2017 appearance on The Tonight Show Starring Jimmy Fallon was edited so that her face was replaced with Will's goatee-adorned face, leaving her feathery green outfit and curly half-up, half-down hair as is. The edited video shows Cardi Smith chatting about her real name, Belcalis Almanzar.

Related:
This Reporter Making Cardi B References in a News Segment Is Fine Journalism, Indeed

Both Will and Cardi caught wind of the funny clip as it made its rounds on the internet, and they couldn't resist reposting it for their followers. "Y'all are doin' Too Much!! Hahaha... This is SO GOOD. Anybody know who did this??" Will captioned his Instagram post, which prompted a "Who did this to us" response from Cardi. The rapper also reposted it with the caption "That one time I drank biotin," as a nod to Will's facial scruff. Ha! The mastermind behind this truly deserves an award for eerily accurate video editing. 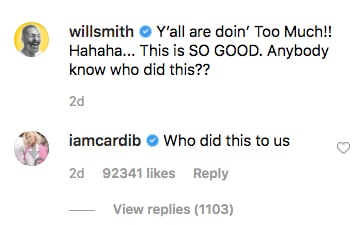