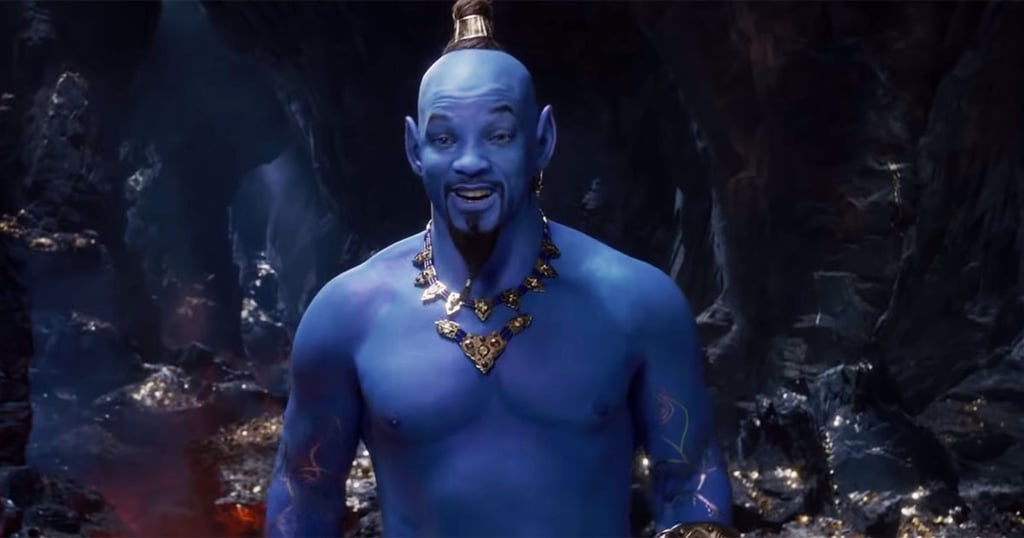 OK, We Really Need to Discuss Will Smith's Genie in the New Aladdin Trailer For a Sec

Forty-five seconds into the new trailer for Disney's live-action reboot of Aladdin, a certain street rat (played by Mena Massoud) rubs a certain lamp, a swirl of bright blue gas comes pouring out, and POOF! We see Will Smith in all his Genie-fied glory for the first time. "You really don't know who I am?" Smith's Genie jokes with Aladdin. "Genies, wishes, lamp . . . none of that is ringing a bell?!"

While he definitely looks like a genie . . . well, we have some thoughts about him as the Genie.

To be fair, we've known for a while now that Smith would be playing the Genie in Guy Ritchie's remake, which seemed like a pretty inspired casting choice — while no one will ever be able to fill the gold, pointed shoes left by Robin Williams in the 1992 original, Smith has more than enough charisma and comedic timing to really make the role his own. But in terms of visuals, the live-action version of the iconic, wish-granting genie who helps Aladdin woo Jasmine while cracking one-liners and eventually seeking his freedom leaves a lot to be desired.

Is it the too-bright shade of blue? Or the overly pronounced pointy ears? His extremely muscular back, or incredibly thick neck?! Regardless of what it is, all of the aforementioned qualities have combined to give the character an uncanny valley effect that is unsettling Aladdin fans all across Twitter, which you can see ahead.

Related:
The New Trailer For Disney's Live-Action Aladdin Is Even More Magical Than We Imagined
Previous Next Start Slideshow
Will SmithMovie TrailersAladdinMovies

by Lindsay Kimble 9 minutes ago