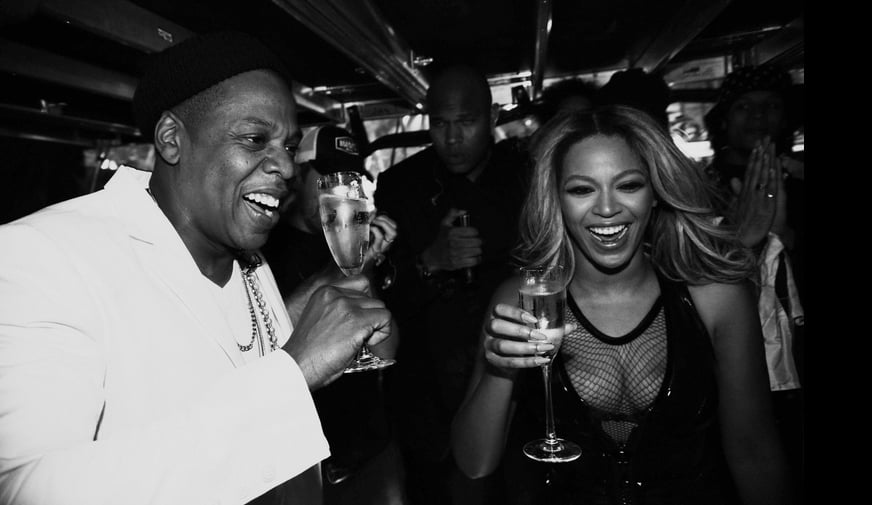 Is Beyoncé Pregnant? Jay Z Reportedly Raps About a Baby on the Way

Beyoncé and Jay Z took center stage in Paris on Saturday, performing their last On the Run concert date to a sold-out crowd. In the final moments, Bey took time to recognize her husband. "I love you so much!" she told him through tears. "Give it up for Mr. Carter!" Jay returned the gesture with a slightly longer speech. "It's been an honor and a pleasure to share the stage with you," he said. "I couldn't dream of anything else than to be in a stadium with the woman I love, who I believe is the greatest entertainer of all time. Make some noise for Beyoncé!" Soon the couple was sipping Champagne backstage as a photographer snapped pictures the singer would later share on her website.

The happy moments came just one day after Jay ignited a firestorm of speculation that Blue Ivy Carter just might be a big sister soon. According to reports, he may have suggested Beyoncé is pregnant with their second child at their first concert in Paris on Friday. Jay reportedly made the big reveal during his performance of "Beach Is Better," changing the lyrics to, "'Cos she pregnant with another one." Whether or not the rumors are true, the couple didn't hide their love for each other while performing that night, the video of which will be used in their upcoming HBO special. Although the duo has faced several split rumors this Summer, they haven't been shy about showing PDA. Most recently, the couple got cute during Beyoncé's sexy birthday celebration, and earlier this month, they couldn't keep their hands off each other at the Made in America Festival. Keep reading to see the special moments from the show, including Beyoncé's performance with Nicki Minaj, and stay tuned for more details as they emerge.

Celebrity Couples
Tiffany Haddish and Common Are the Cutest New Couple, and These Pics Prove It
by Corinne Sullivan 12 hours ago