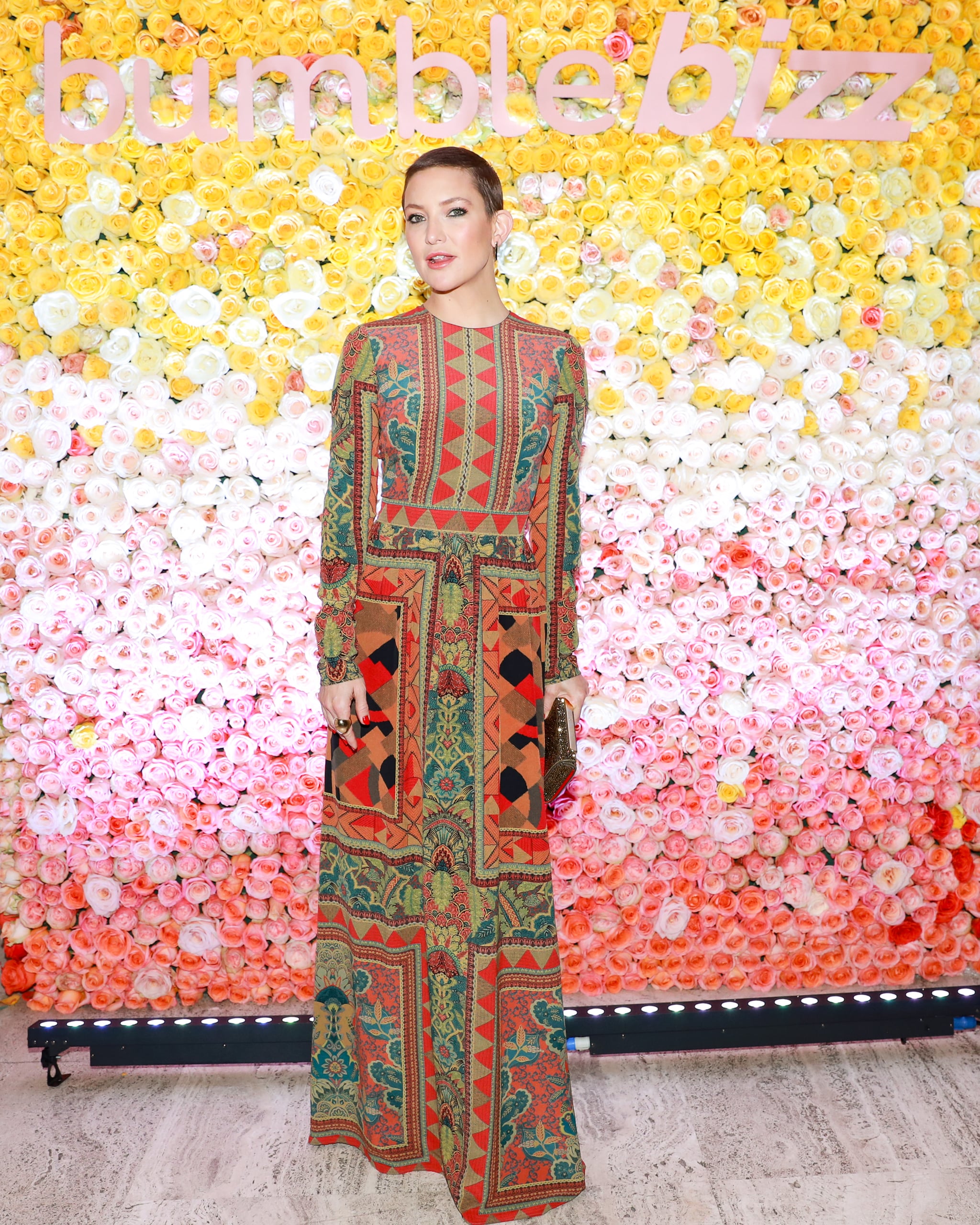 Women are having a moment. After a difficult year, we're leaning in. Consider everything that came together to warrant the Women's March, the debate around Fearless Girl, and the #meetoo social media campaign. But at the same time, it also brought about one of the most woke periods of feminism to date.

"Be the CEO your parents wanted you to marry," Wolfe said to a room of 120-plus influential women in NYC on Oct. 19. We were there to celebrate Bumble Bizz, the feature of the Bumble app that allows people to connect with each other professionally. The catch? Women always have to make the first move when messaging someone.

Alongside Wolfe, the event was hosted by a group of rock-star women: Kate Hudson, Priyanka Chopra, and Karlie Kloss, and was attended by Fergie, Rachel Zoe, and more (including my personal beauty heroes, Drybar Founder Alli Webb and Tata Harper of her eponymous skincare line).

Bumble Bizz is similar to the dating and "BFF" versions of the app; you swipe right to say "yes, I'm interested" and left to say "no." Since Bumble launched in 2013, it has gained over 21 million global users and helped facilitate 250+ million female-charged "first moves" of the one billion messages sent. That's a hell of a lot of women taking destiny into their own cell-phone-holding hands.

Related:
Bumble Is No Longer Just For Dating — It Can Now Help You Land Your Dream Career, Too

The room — decorated with votives and light-pink floral arrangements — was the ideal, feminine backdrop for a meeting of the minds. Each table setting displayed a card with a conversation starter. At my table, we went around answering these prompts, and it actually led to me making a new friend and professional connection (we swapped emails at the end of the night). While we didn't meet on the Bumble app, our connection is part of the same movement: women befriending, supporting, and empowering each other. In the words of Wolfe, "Swipe by swipe, we're making change."

To dig deeper into why women need to lift each other up instead of competing, I chatted with Kate Hudson. Yes, she's stunning in the flesh with radiant skin, a lean, toned body, and a calm confidence. And, of course, I told her how much I love her shaved head, because the woman can pull it off and look like a sexy badass. But this was not a style-focused interview. We delved into what feminism means today, how Bumble Bizz can help working mothers (like herself!), and why women who speak out against harassment in the workplace show tremendous bravery.

POPSUGAR: What made you hear about Bumble Bizz and think, "I need to be a part of it"?

Kate Hudson: My two girlfriends Sara and Erin Foster are working really closely with the app. And so, I got involved, and then was kind of like, what an awesome idea to create a network where women can connect with each other. What I love the most that I really want to talk about is that there are women in business. [They] are incredibly focused on creating their own businesses and going out there. That's going to be their life, whether they have kids or not. And then there are women who have children that kind of nobly say, "You know what? I'm going to be a mom, and that's going to be my work and my love of my life." Which to me, is just as ambitious of a job and a journey.

Then their kids start to get older. And all of a sudden there are all these years — whether it be 10 years or 20 — where they have not been in the workplace, but they have all this skill. Something like this provides women with an opportunity to get back into a workplace. This is such a great opportunity for women to say, "You know what? I want to dip my toes back in. I want to put my feelers out there."

PS: This app allows women to make the first move. Why is that so empowering for us?

KH: Technology allows us to weed out a lot of the extraneous circumstances that can happen in certain environments. If you have an opportunity to say, "I'm going to be in charge of my own narrative. I'm going to be the one who sees that this is OK for me," like anything else, it just gives you a position of feeling like you can be in charge of those things.

"We're still fighting uphill battles, and you just have to hone in on making change, one course of action at a time."

KH: At this point, it's not necessarily about what it means as much as it is just something we know now. The dialogue is out there, the veil has been lifted. We all know that there's a ways to go. We're still fighting uphill battles, and you just have to hone in on making change, one dialogue at a time, one course of action at a time. Right now everyone is able to have a real voice and have it be nice and loud. Being loud is a really important thing right now. It's an amazing thing to watch. It's important because making noise makes change.

At the same time, I think women are not interested in being like "the man" or having the same position as "the man." Women want to be women with equal rights. At this point now, we're very clear about that. I don't want to be the same as him. I want to be me with the same opportunity. So I think that's the difference of today than the fight that my mom had to fight, which was a little bit different and as complicated.

PS: Why do you think it's more important than ever for women to help each other?

KH: Because we've been put in positions for hundreds of years to compete with each other. Society — from very early on, just historically, I'm talking about like way, way back — it was embedded in our nature and in our DNA, which has been changing over the last hundred years. We've been fighting the position that we've been put in. We're trying to get back to the way, way old times when we made the choice. But we've been put in a situation after land ownership, when men became in power of [it].

Here's a history lesson: [when] men [took] power of their lands, all of a sudden, women became a prize. In order for us to be protected, we had to make sure that we had our partner on our side. We were put in a position where our vulnerability was a life and death scenario. And we were taken advantage of, and we were put in a certain place that we had never been put in before.

Now we're in a much more different cognitive place. We have to remember that we're no longer competing for anything anymore. We're not competing for life and death. Now we need to go back to when we would raise our children together and be able to have that strong unit of community, which is our strength. So women together, as a tribe, to me, are the strongest force. But we were put in a position to have to compete with each other, and that's got to stop. We've got to know that whenever that creeps up in our head, that that's not our true nature. That was something that was embedded in us, and that needs to start to go away.

"It's a very scary thing when you're a woman who's been assaulted or harassed to come forward. And it takes a lot of courage."

PS: What's your advice for women who don't take sh*t and are trying to avoid harassment in the workplace?

KH: Tough women who don't take sh*t are also put in positions that are really scary for them. It's important that they feel supported, but it's also important that we allow people to come to things on their own time. It's a very scary thing when you're a woman who's been assaulted or harassed to come forward. And it takes a lot of courage. As a whole, I speak for all girls when we say that it gives us so much hope and inspiration when other women come forward and are so frank about their experiences. It's important to support people who have a hard time coming forward, and this is an issue that's going to continue to happen that we need to continue to support. It's not as easy as it seems sometimes. It's a really, really, really hard thing for women to come forward.

We've lived in a culture where, if a woman comes forward with assault or harassment or rape, there's this feeling of, "Am I going to be seen differently? Is this going to affect my work?" It's clear now that we all need to be more supportive. Now everybody's like, "OK, listen up because it's time to, again, lift the veil and just recognize that this is a huge problem."

In certain states there's a statute of limitation on women who have been raped. How do you do that to a woman? If they are hiding something for 10 years that they finally have the courage to come forward and talk about, how could you take that away from her? And that person should still be held accountable. There's so much about this that we should always be talking about. There are so many layers. And it happens every day, all the time.

PS: As a mother raising boys, what do you hope to teach them about equality?

KH: I have such faith in the millennial generation, because they just don't think like other generations do. They really don't. And I truly believe it's going to be a phenomenal thing to watch, because they're very outspoken. They are living in a world right now where equality is something that the young kids are supporting. It's just what their focus is. Equality is everything to the kids. At least that's what I'm witnessing and it's an amazing thing to watch.

The thing we need to work on as a country is our educational system. To me, that is something that our generation needs to be focused on. To make sure that for our next generation, every child — no matter what background, no matter what ethnicity, no matter whether they're whatever gender — that they are all educated to have real equal opportunity. That's number one for me. But I have no question that if it's not our generation that will make sure that that happens that it will be our children's generation.