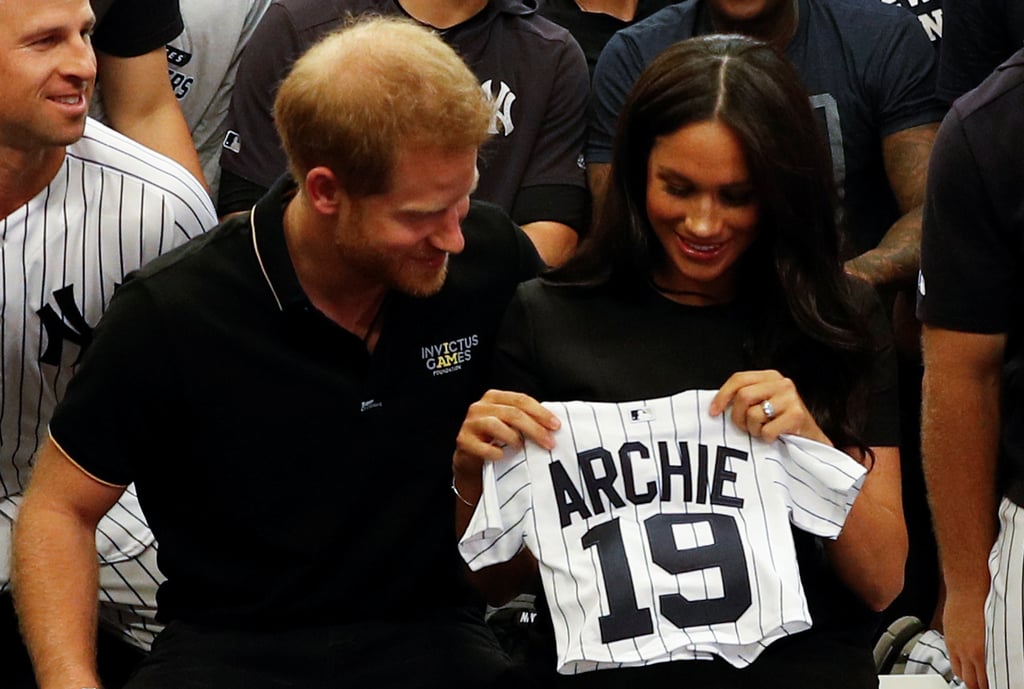 We knew Prince Harry would be at the first-ever Major League Baseball game in London, but it turns out Meghan Markle came along, too! On Saturday, the sweet royal couple attended the game between the New York Yankees and the Boston Red Sox at Queen Elizabeth Olympic Park. The prince — who sported a t-shirt with jeans — and the duchess — who rocked a sophisticated black dress — visited both teams in their respective locker rooms to greet the staff and players (and Meghan's distant relative, Red Sox player Mookie Betts).

While meeting with the organizations, Harry and Meghan even received a few special gifts for their newborn son Archie Harrison Mountbatten-Windsor: a tiny Yankees jersey and a Red Sox onesie! "You guys have beaten next door's present, by the way," Harry told the Yankees team upon receiving the jersey.

Their visit is reminiscent of Prince Harry throwing out the first pitch at a New York Mets game in 2010. He didn't get to show off his throwing arm this time around, but he seemed to enjoy the sporting event alongside Meghan, leaving us with soaring hearts and cheesy smiles. Keep scrolling to see more pictures and videos from their appearance!

Simone Biles
Simone Biles's Boyfriend Shares the Love in Adorable Olympic Tribute: "You Inspire Me"
by Grayson Gilcrease 21 hours ago

Summer Fashion
In Case You Forgot, Jennifer Lopez Is Really Into Ben Affleck — Just Look at Her Jewelry
by Yerin Kim 3 days ago