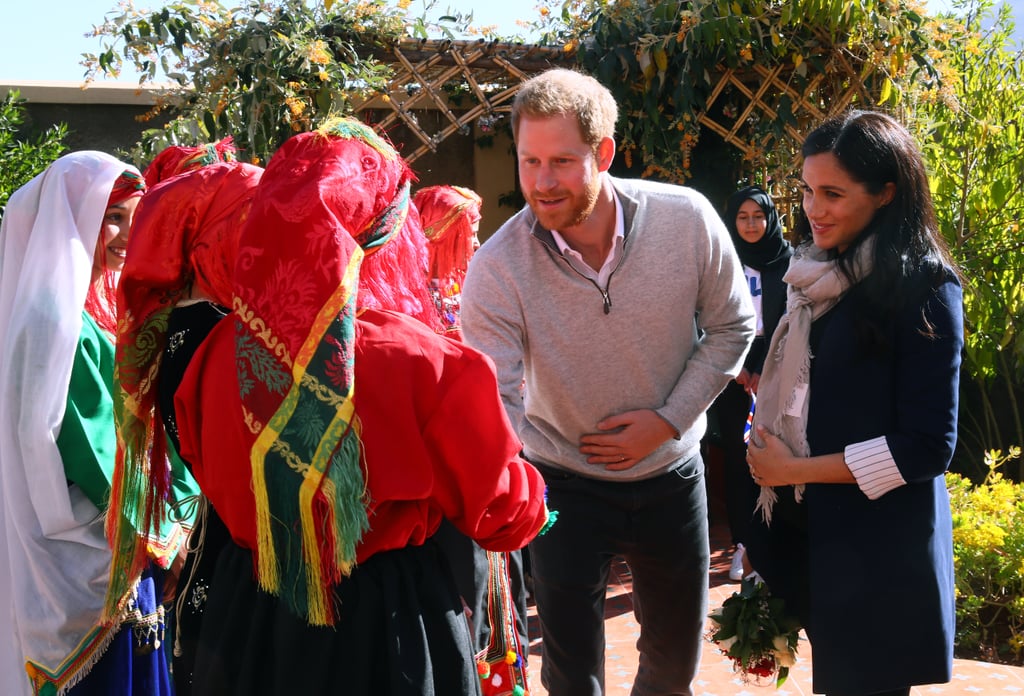 Prince Harry and Meghan Markle's Morocco tour kicked off on Saturday, and the cute couple is already making their rounds in the country. On Sunday, the royal duo visited Education For All's local accommodate and Lycée Qualifiant Grand Atlas secondary school in the town of Asni in the Atlas Mountains. There, they learned all about Morocco's efforts to promote education equality.

During the trip, Meghan and Harry — who are expecting their first child in the Spring — learned about EFA's mission to help young students gain access to secondary education by building boarding houses. They stopped by classrooms, spoke with some of the girls EFA has helped, had a few sweet interactions with young fans, and attended a ceremony where Harry awarded EFA member Mike McHugo with an MBE (Member of the Most Excellent Order of the British Empire) award. Meghan — who has previously been an outspoken advocate for higher education — even impressed a few people with her French skills!

When the soon-to-be parents visited Lycée Qualifiant Grand Atlas secondary school, they chatted with teachers and got to see how some of the students learn English. Meghan also took a moment to get a henna tattoo as a part of Morocco's tradition for pregnant women. Ahead, photos from Harry and Meghan's trip during day two of their tour!

Related:
Meghan Markle's Royal Tour Wardrobe Is a Lesson in How to Pack For Every Occasion
Previous Next Start Slideshow
Meghan MarkleThe RoyalsPrince HarryThe British Royals