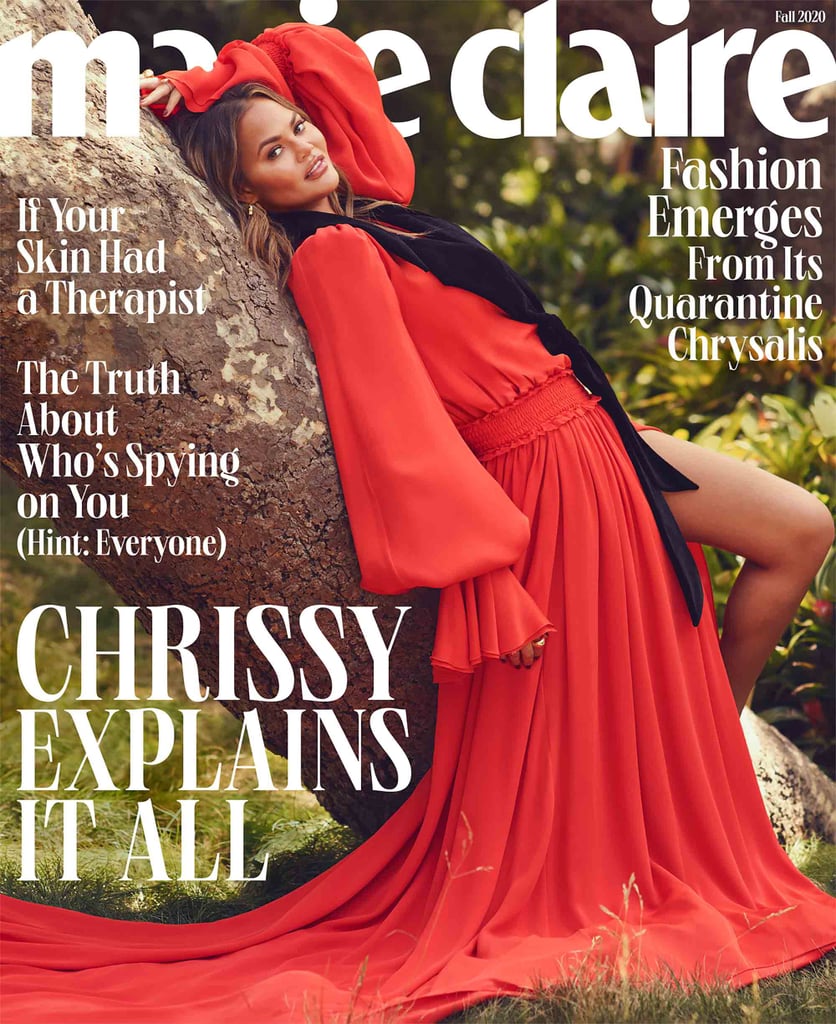 She's the reigning Queen of Twitter, the coolest chef in Hollywood, and she's currently expecting her third child, but Chrissy Teigen has no plans of slowing down. The multifaceted momma is the cover star of Marie Claire magazine's fall 2020 issue, in which she opened up about the upcoming election, what she and John Legend have been teaching their kids about race, and so much more. "Part of me knows this is not the right time to go silent," she said. "It does feel very selfish and weird to say that my mental health is important when there are people being murdered by police and murdered in their own homes . . . I have Black children, so is it really the right time to not want to step on anyone's toes?"

Chrissy is no stranger to being on the receiving end of internet hate, but it's only after she stands up for what she believes in. And being a public figure who speaks her mind so openly is what has made fans applaud her relatability and honesty over the years.

"Regardless of money or status, they're always going to have their skin color."

Chrissy and John have a third baby on the way, and as down-to-earth as they are, they've made it a priority to educate 4-year-old Luna and 2-year-old Miles about race and the current political state we're in. "There are books that I read when I became a mom that would explain to them hard and traumatic situations. But it's really hard to teach them about their privilege; there are no books for that. But regardless of money or status, they're always going to have their skin color," she said. "When it comes to them being treated differently because of the color of their skin, I'm going to look to John for a lot of help with that because while they are Asian and white too, their skin color is Black."

She added, "We just try to talk to them like little adults, saying it in words they'll understand, making it known that it's very serious, and letting them ask as many questions as they need." As important as it is to have these conversations with children at a young age, it's equally important to lead by example, and that's what Chrissy and John have done in their support for Joe Biden and Kamala Harris in the upcoming presidential election. "We are a divided, hurt nation that needs to be brought back together. [Biden is] someone who looks into issues with clear eyes, empathy, and understanding from being involved in politics," she said. "I also look at a presidential candidate as someone I want my kids to be able to look up to. I don't see that in Donald Trump or any of his family."

When Chrissy speaks up about her political views, she does so for Luna and every little girl out there. "I hope that she's never afraid to speak up and knows that other women will have her back. And I really hope she knows there are good men out there like her daddy who will support her and not talk down to her and demean her." Check out Chrissy Teigen's full interview with Marie Claire here, and see photos from the cover shoot ahead.

Related:
John Legend Has Chronicled His Growing Family in His Music Videos, and It's Sweet as Hell
Previous Next Start Slideshow
Chrissy TeigenCelebrity FamiliesCelebrity InterviewsCelebrity QuotesMarie ClaireMagazine CoversRace And Culture