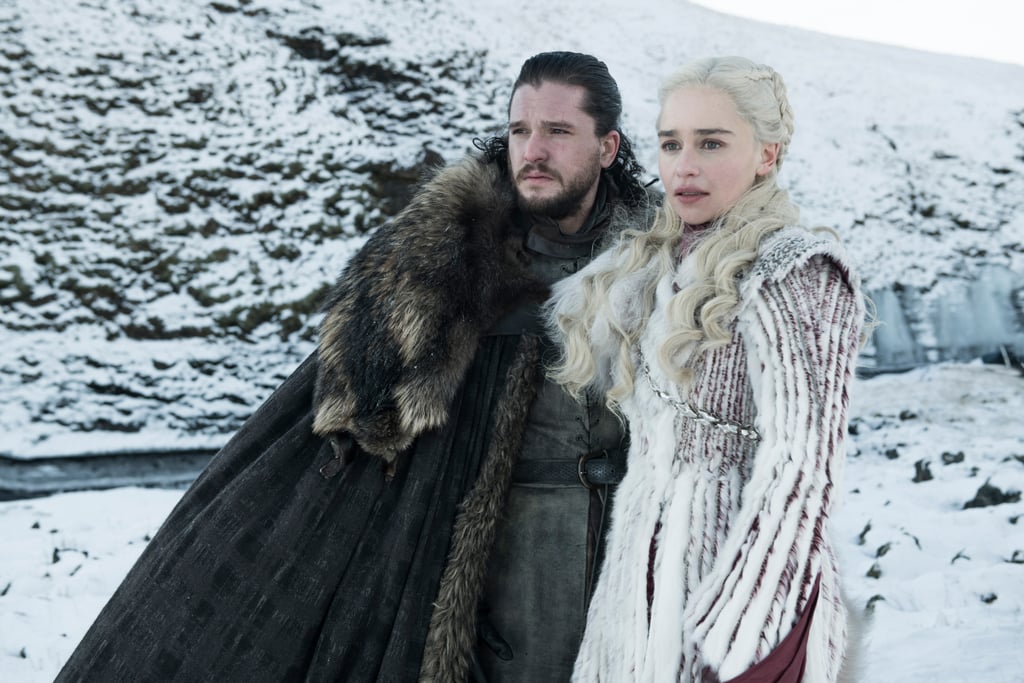 Um, Can We Talk About Daenerys and Jon Snow’s Little Dragon Date For a Sec?

Warning: major Game of Thrones spoilers ahead! Stop reading now if you aren't caught up.

Sure, Game of Thrones will probably kill off our faves, and we're all going to have nightmares about that terrifying child screaming through the fire, but for one brief, lovely moment, can we just soak up the magic of Jon Snow and Daenerys Targaryen riding off into the snowy waterfalls together on DRAGONS? During the season eight premiere, they casually stride out of Winterfell, hop on some dragons, and soar toward the horizon like it's your average Sunday afternoon. If you'd asked me to write a season eight wish list, I absolutely would've included a borderline cheesy dragon-riding date, and the scene delivers.

For one thing, there are the clear implications of Jon Snow being able to ride a dragon in the first place. (See: his Targaryen roots.) And then there's the question of whether the next time we see these two flying side by side will be on the living vs. dead battlefield, opposite the Night King and Viserion — which, yikes. Oh, and speaking of yikes, did you catch the very pointed look the dragon gives Jon Snow as he kisses his queen?

TBD on how the dynamic between Daenerys and Jon Snow may shift now that he knows the truth about his parents, but in the meantime, we can relish in the pair's funny flirting plus the hilarious Twitter reactions that followed. Did several people feel like they heard "A Whole New World" playing the background as Jon and Dany soared through shining, shimmering, splendid waterfalls? Yes. Did the dragon's intense staredown with Jon Snow inspire a bunch of perfect memes? Definitely. Keep reading to see the best reactions to the scene, then dive into all the Game of Thrones season eight theories as we await next week's episode (and rewatch the premiere another time — or five.)