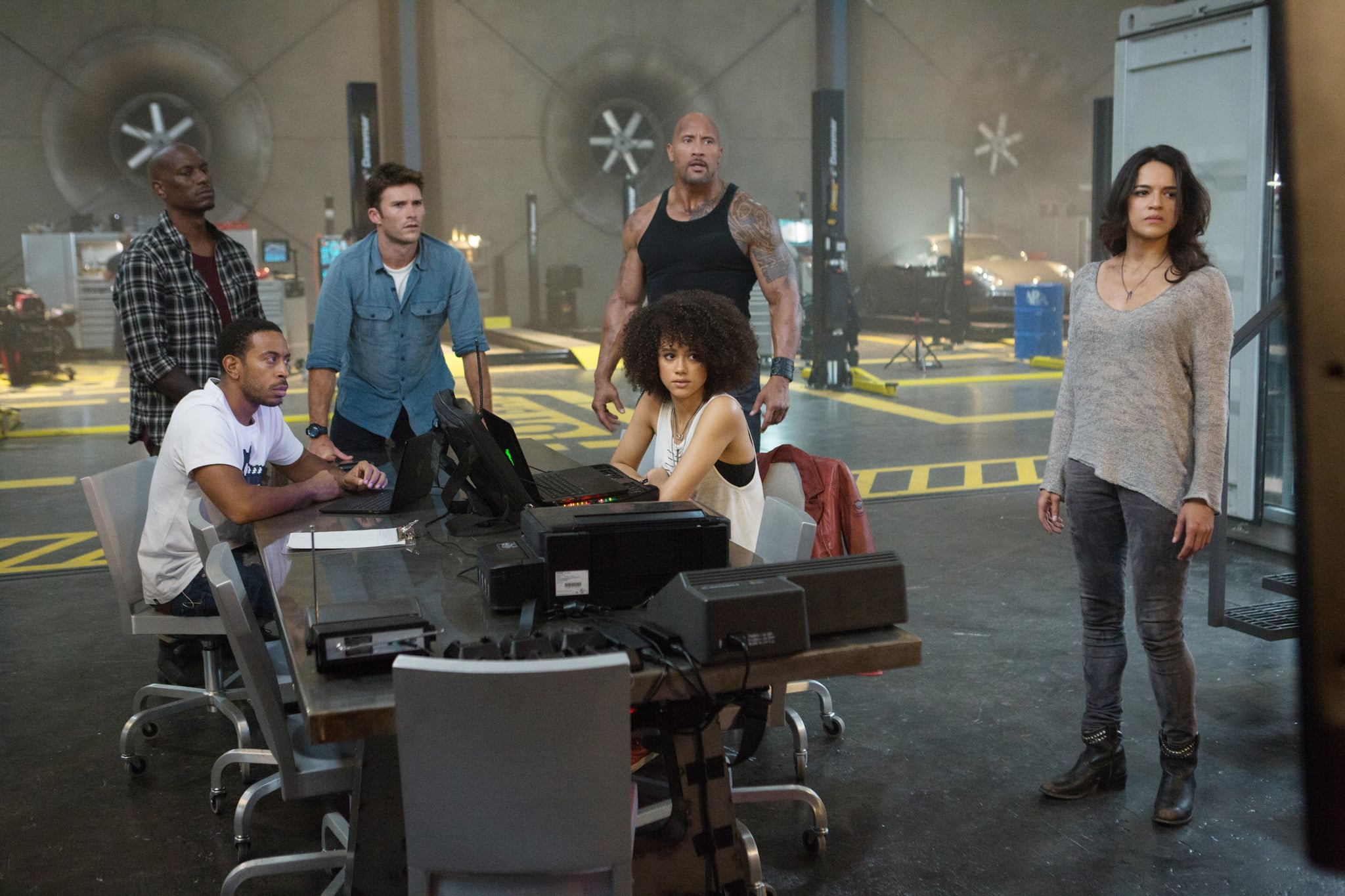 Literally every big spoiler from Fate of the Furious below!

If you've already heard how Fate of the Furious ends, but you're a glutton for spoilers, then you've come to the right place. To put it simply, the eighth movie in the Fast and Furious franchise is f*cking insane. Every scene is more unbelievable than the next, and even after I took a day to let the story marinate in my brain, I'm still having trouble figuring out which moment is craziest. Is it when Helen Mirren shows up? Or when Charlize Theron's character rams a submarine into a bunch of cars? Or when Charlize Theron agrees to wear blonde mini locs? Or when Charlize Theron says literally anything? Let's investigate:

Related:
The Fate of the Furious Soundtrack Is Your Summer 2017 Playlist

Let's get the biggest twist out of the way first: Dom "I Don't Have Friends, I Got Family" Toretto stabs everyone he loves and cares about in the back, but for a very good reason. When the movie begins, Dom and Letty (Michelle Rodriguez) are in the midst of enjoying a passionate honeymoon in Havana, Cuba. While grabbing coffee one morning, he's approached by Cipher (Charlize Theron), who blackmails him into doing her bidding because . . .

Remember Elena (Elsa Pataky)? The Brazilian police officer Dom hooks up with in Fast Five when he thinks Letty is gone forever? She finds out she is pregnant shortly after he reunites with Letty, but she doesn't tell Dom because she doesn't want to ruin his honeymoon with the news. Unfortunately Cipher finds out and kidnaps both mother and infant son, imprisoning them on her high-tech, untraceable plane. After letting him in on the big secret, Cipher is able to force Dom into doing whatever awful mission she wants.

Agent Hobbs (Dwayne Johnson) has been enjoying a nice, quiet life coaching his daughter's soccer team free of dangerous government espionage, when he's approached with a task that will prevent the deaths of millions. All he has to do is round up a team to help him infiltrate a high-security base in Berlin to steal an EMP device, but they warn him that the government can't protect him if he's caught. He agrees, calls up Dom and the rest of the gang, and off they go to Berlin. The mission goes smoothly at first, until Dom slams his car into Hobbs', sending it flipping off the side of the road. He steals the EMP, and leaves Hobbs to get arrested by the police.

4. Hobbs bumps into an unlikely ally while being locked up.

When he's tossed in jail, Hobbs is put in a cell directly across from Deckard Shaw (Jason Statham), aka the villain of Furious 7. Shaw taunts him, and Hobbs responds by power lifting a massive, concrete bench and promising he's going to whoop his ass if he ever gets his hands on him. The opportunity arises soon after their conversation, thanks to some intervention from the omniscient Mr. Nobody (Kurt Russell). Hobbs and Shaw escape the prison and the rubber bullet-filled brawl raging inside, where they're greeted by Mr. Nobody and his trainee, Little Nobody (Scott Eastwood). 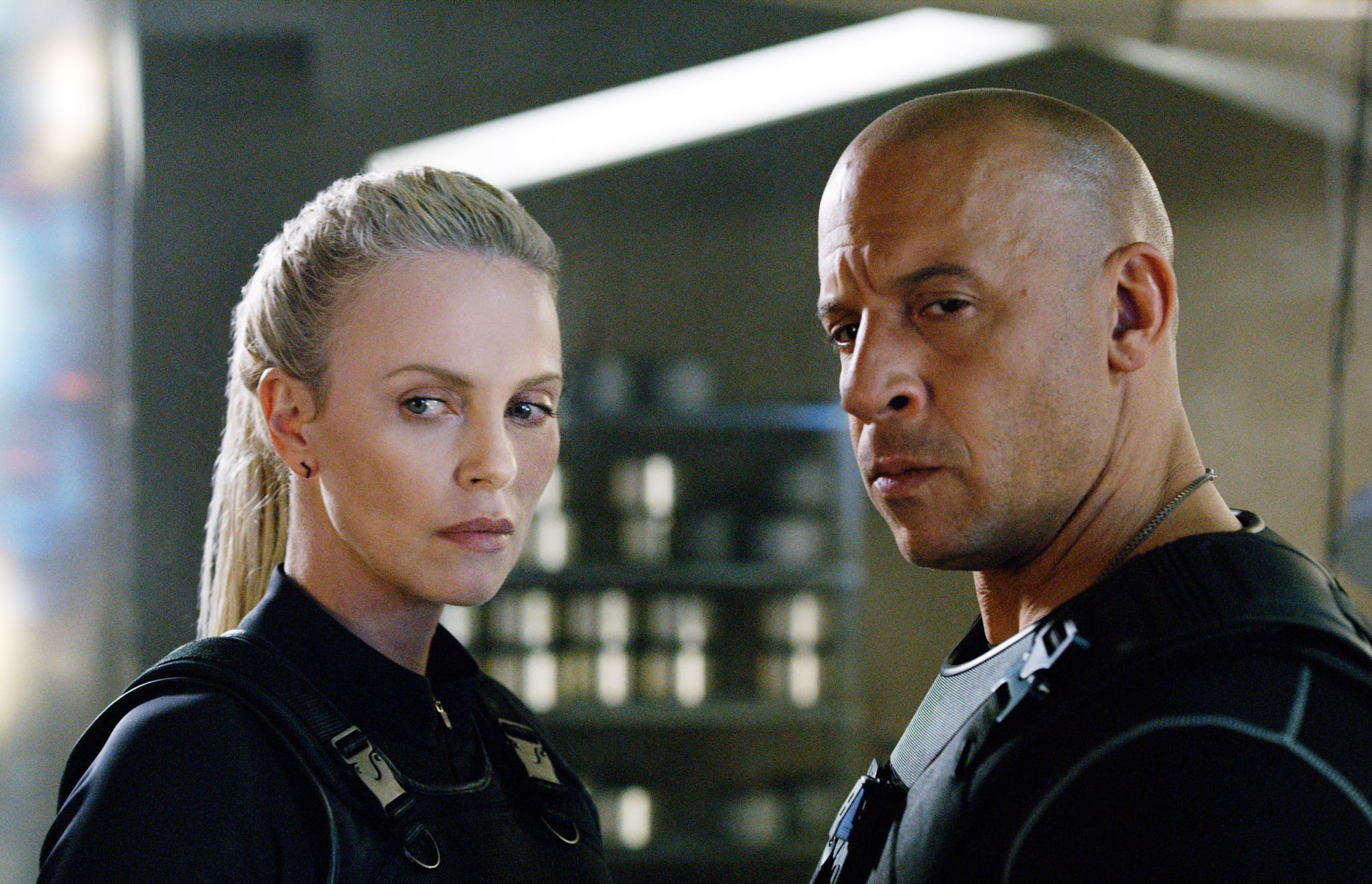 5. Cipher makes out with Dom in front of Letty.

To complete her plan, Cipher needs to steal the God's Eye program Ramsey (Nathalie Emmanuel) created, which is embedded in the hard drive at Mr. Nobody's headquarters. Since she can only retrieve it physically, she and Dom set off explosions in Mr. Nobody's offices, incapacitating most of the team (who are all there being debriefed). Through her haze, Letty manages to ask Dom why he's doing it. Instead of answering her, he shares a lengthy, cringe-worthy kiss with Cipher and vanishes, leaving Letty devastated.

6. Helen Mirren is the matriarch of the Shaw family.

Complete with a Cockney accent and a cuppa, the Oscar winner makes her delightful Fast and Furious debut as Magdalene Shaw. Before starting a mission for Cipher, Dom arranges a secret meeting with Magdalene in a sketchy dive bar in NYC, although we don't find out until later what exactly it entails.

7. Cipher destroys more of NYC than the Avengers ever could.

With the help of God's Eye, Cipher is able to locate two Russian officials who have a briefcase containing nuclear launch codes in their possession, driving in an armored limo through NYC. She hacks every car in the city with an automated driving system (which apparently exist all over the place in this universe), and unleashes total chaos upon the streets. Eventually all of the "zombie" cars (which are piling up, causing accidents, and diving out of six-story parking garages) get the limo in one spot, where Dom is able to retrieve the briefcase.

8. The team faces off against Dom.

Dom thinks he's going to make it out of the situation scot-free, only to find himself surrounded by his former team: Letty, Roman (Tyrese Gibson), Hobbs, Tej (Ludacris), and Little Nobody. They all shoot harpoons from their own cars into every side of Dom's in an attempt to . . . actually I'm not sure what this stunt was supposed to do. But anyway, it fails, and Dom manages to flip over a bunch of their cars and escape with the briefcase on foot. 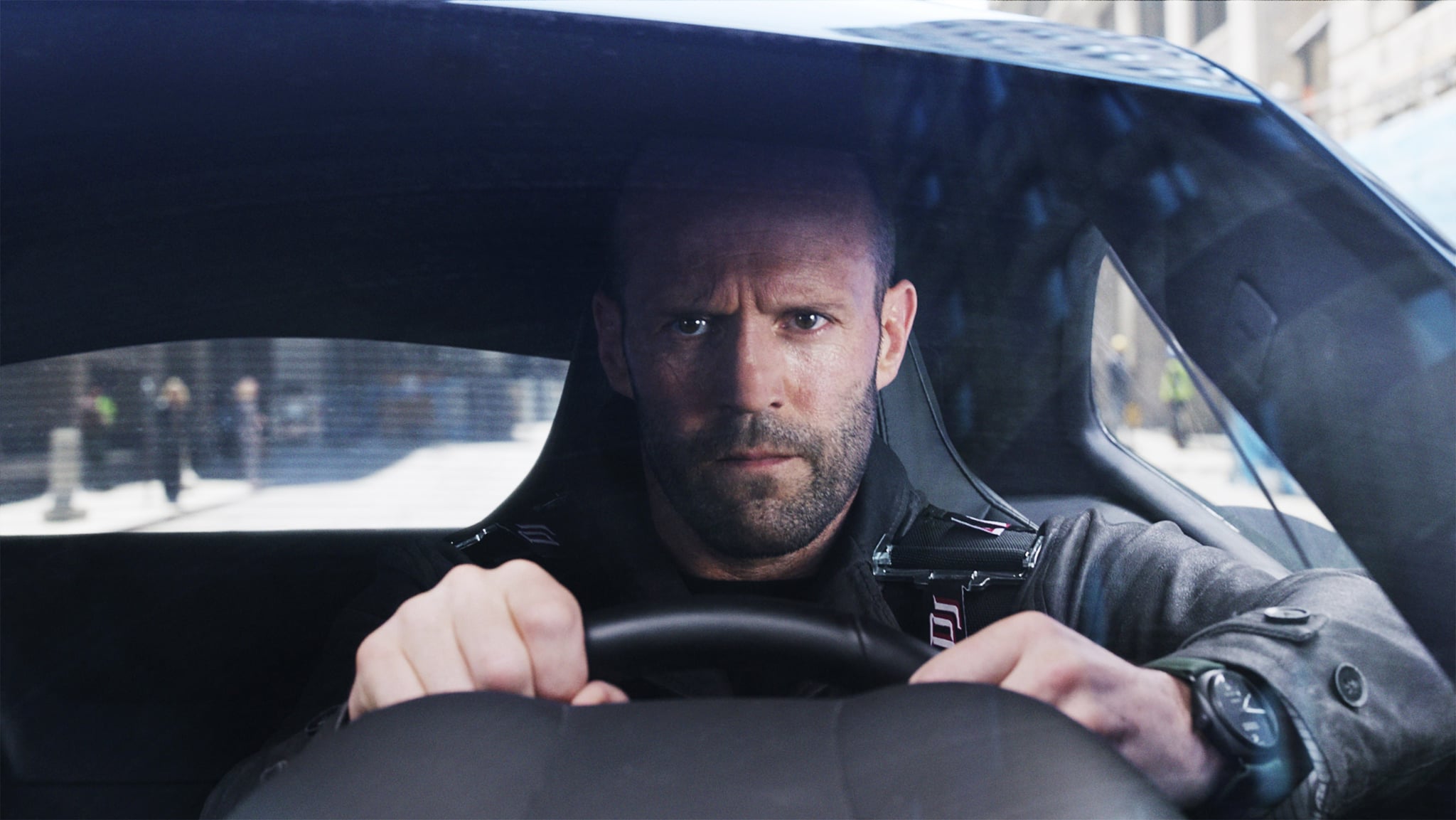 Shaw chases after Dom, and confronts him in the street. Without missing a beat, Dom whips out a gun and shoots him dead, point blank. Hobbs sees Shaw crumble to the ground, but can't go to the body since police are on their way. Letty continues to chase after Dom and is actually able to get the briefcase away from him, because he can't bring himself to injure her. Then Cipher's main henchman, Rhodes (Kristofer Hivju), arrives and ruins the mood, whisking Dom and the nuclear codes away.

Cipher watches the whole interaction between Dom and Letty play out on a security camera, and is not pleased he doesn't kill her when he has the chance. As punishment, she makes him watch Rhodes shoot a bound and gagged Elena in the head, all while she menacingly cradles their son. She leaves the little guy alive only to ensure Dom will help her get what she wants.

11. Cipher has been behind events in the last few movies.

During one of her many monologues, Cipher reveals that she's been the one orchestrating a few of the heists that Dom's team had managed to foil in the past (like Mose Jakande's operation in Furious 7). That's why she wanted him on her team so badly.

12. A lot of important stuff involving a massive submarine goes down.

Eventually, Cipher's team and Dom's former fam converges at a remote submarine station in Russia. Armed with the nuclear launch codes, Cipher plans to hack into the submarine there, break it out into the open ocean, and save the nuclear weapons aboard for a rainy day (she views them as a way to hold the world's leaders "accountable," whatever that means). She gains control of the sub, despite Ramsey and Tej's defensive hacking skills, and gives Rhodes the order to take out Dom's team via sniper rifle.

Meanwhile, Ramsey comes up with the idea for the group to race across the top of the frozen bay to lower a sea wall 10 miles away in a desperate attempt to keep the submarine from reaching open water. Not only do they have Cipher's men on their tail but also members of the Russian military shooting missiles at them. 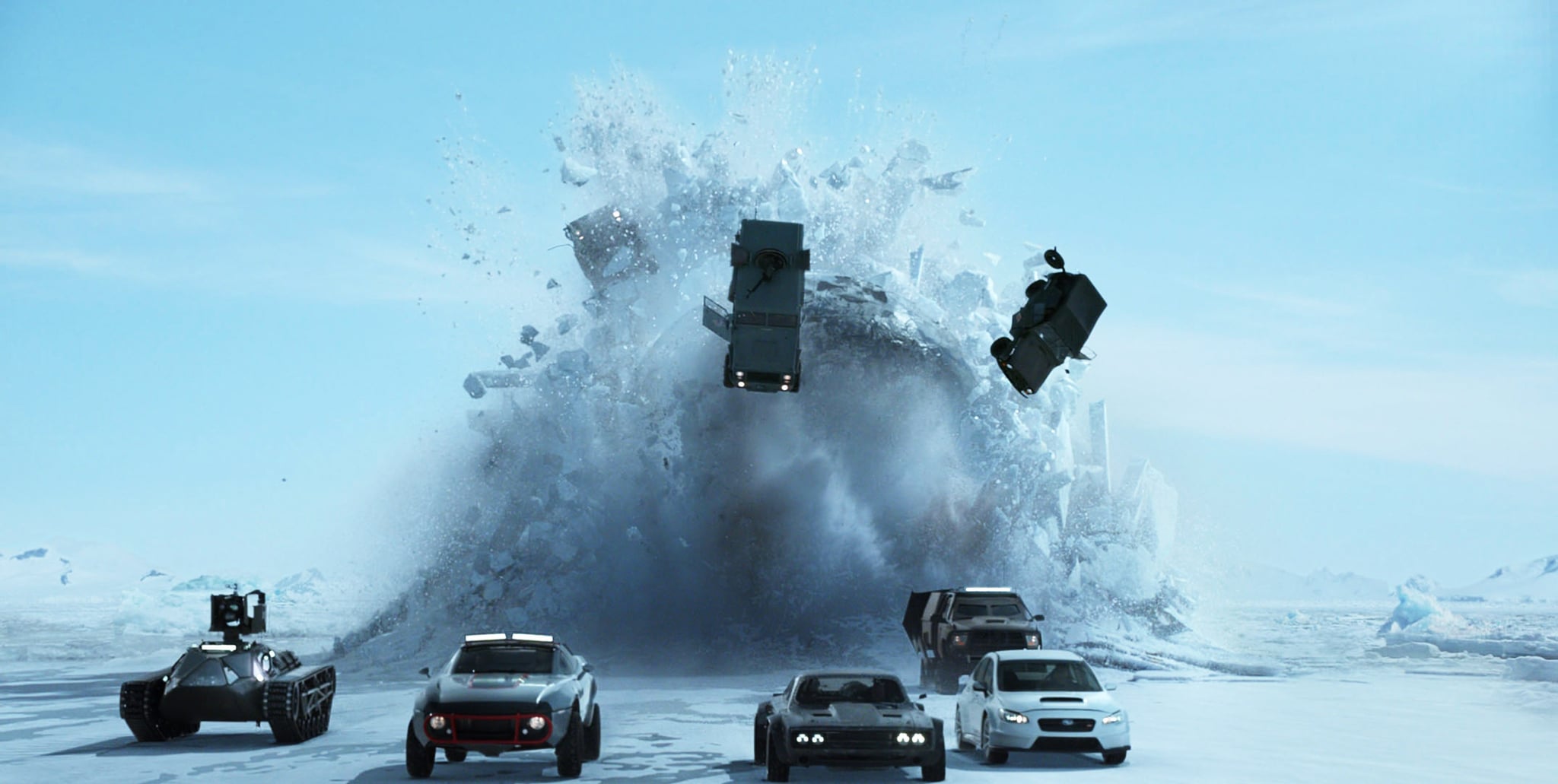 13. Dom is able to turn the tables on Cipher.

Since the only thing standing in the way of Dom being able to wriggle out of Cipher's grip is his son, he arranges a rescue mission with the help of Magdalene Shaw. See, when Dom shot Deckard, it wasn't fatal. He had Tego Leo and Rico Santos (the wise-cracking brothers from Fast Five) pose as EMTs and load him into an ambulance, where Magdalene sat waiting (this is all explained in a flashback). She informs her son of the plan she and Dom had cooked up and that he needs to break his brother, Owen Shaw (Luke Evans), out of prison so the two could get on Cipher's plane.

Back in the present timeline, Deckard and Owen sneak onto Cipher's plane mid-flight with the help of some fancy jet packs, and quickly find Dom's son. With the baby in safe hands, Dom kills Rhodes before he can shoot anyone, and joins his family down on the ice. Cipher, livid at the turn of events, desperately tries to out pace the team by remotely driving the sub from the safety of an armored room in her plane.

14. Basically everything blows up.

Left without a force on the ground, Cipher decides her only option is to ram the submarine through the ice underneath the united team, in hopes that they'll all drown and she'll emerge victorious. The only cars she manages to destroy, of course, are the remaining Russian military trucks chasing them. Next, she launches a heat-seeking missile at the group. Dom tells them all to peel off and leads the missile away by turning on some kind of giant bonfire thing on the back of his car.

The missile latches on to his heat signature, and after zigzagging across the ice for a while, he circles back and JUMPS THE DAMN SUBMARINE while simultaneously turning off the bonfire off the back of his car, so that the missile blows up the sub, instead. He dramatically rolls out of his car, and the rest of the team floors it over to him to protect him from the blast.

15. Cipher is in the wind, literally.

As Cipher realizes she's out of options — Deckard has killed every single guard on her plane (while carrying Dom's son, no less) and he's about to shoot her, too — she parachutes out of the side of the plane and disappears. Mr. Nobody later says she popped up in Greece, but they lost her.

16. Dom pays tribute to Brian in the cutest way.

The team welcomes Dom back with open arms, and the movie then flashes forward to them having an afternoon BBQ on the rooftop of a building in NYC. As a way to honor the memory of both Brian O'Connor and the late Paul Walker, Dom chooses to name his son Brian, after his old friend. This isn't an "insane" spoiler, per se, unless you count the fact it made an insane amount of tears rush to my eyes.

The Tonight Show Starring Jimmy Fallon
Kenan Thompson Teases the "Good Burger" Sequel: "We're Working Harder on It Than Ever"
by Njera Perkins 16 hours ago