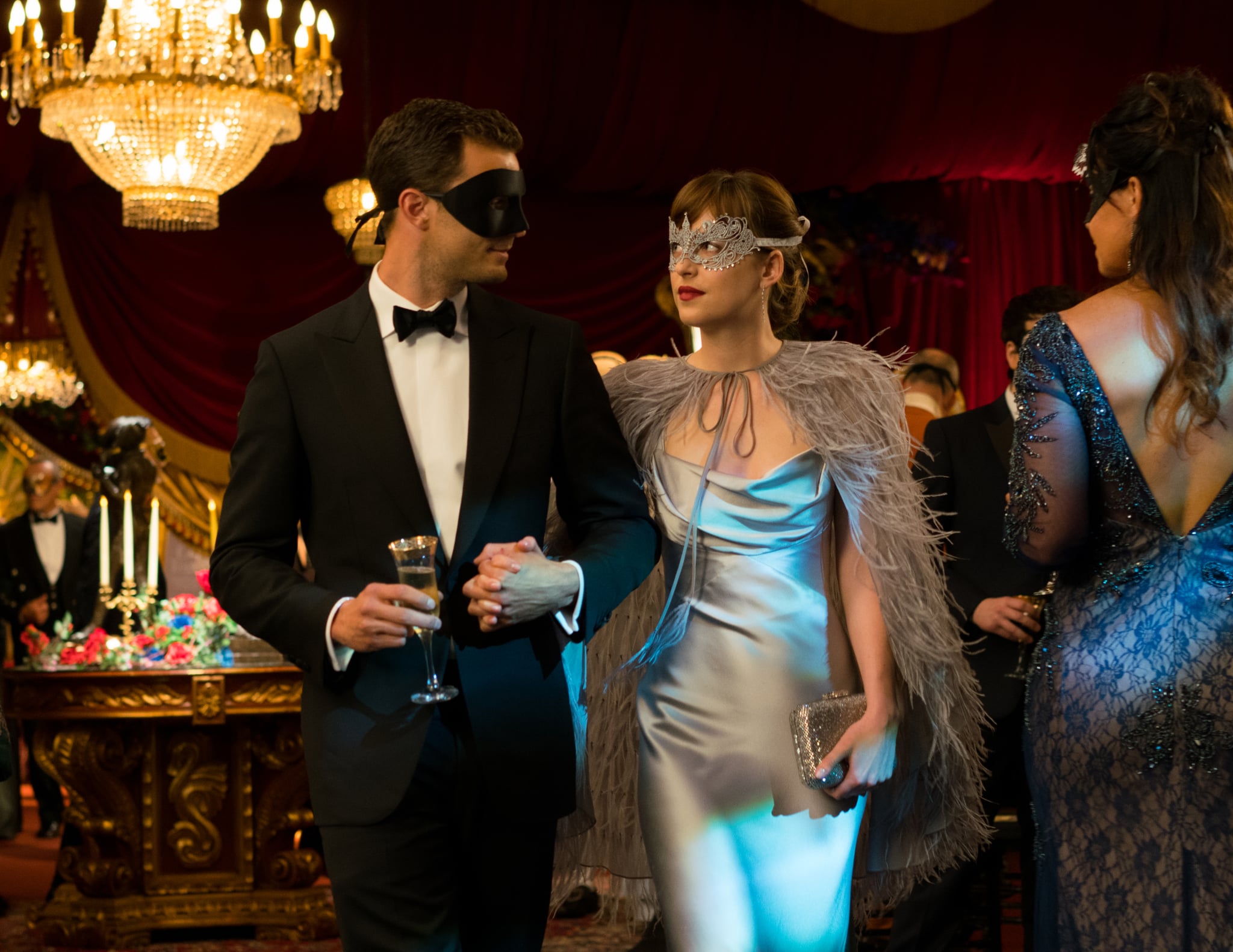 Ana (Dakota Johnson) and Christian (Jamie Dornan) are back for Fifty Shades Darker, and moviegoers are certainly in for an interesting ride. Even though the film is categorized as a sexy drama, there are funny moments here and there — whether they were intended or not. While some scenes are meant to make you chuckle — like Johnson's nod to her mother's movie Working Girl — others aren't necessarily intended to make you laugh. But with so much melodrama, how can you not? If you haven't caught the movie yet, there are some spoilers in here, but these are the moments that made us and our fellow audience members crack up.

Christian has a rule of not letting people touch him, but when his relationship with Ana becomes more serious, he starts to let down his walls. As the two talk about being honest and opening up more with each other, Christian tells Ana to outline his chest with lipstick to differentiate what part of his body is fair game and which she should never touch. First, it's already weird enough that he would have Ana draw on him with makeup (they didn't have any markers around the house?), but the most cringeworthy part is his reaction. He actually looks like he's in pain as she touches his skin with the red tube of lipstick.

2. When Christian Still Has Said Lipstick on in the Shower

After attending his parents' charity ball, the two find that Ana's car has been completely destroyed when they return home. They proceed to hide out in his boat (because that's totally the safest place to go) for the night. Following their stressful evening, Christian jumps in the shower with the red lipstick on his chest still intact. Did he seriously wear that under all of his clothes? There's no way that didn't smudge or immediately wipe off in the shower. Come on, guys.

3. When Ana Tells Her Co-Worker She Doesn't Expect Her to Get Her Coffee

OK, so this was actually meant to be funny, but if you haven't seen Working Girl, the reference probably went right over your head. When Ana takes over for her boss Jack Hyde (Eric Johnson) at work, her co-worker asks if this means she's her new boss, to which Johnson mimics her mother Melanie Griffith's famous line from the movie, telling her, "I don't expect you to fetch me coffee unless you're getting some for yourself."

4. When Christian Tells Leila to Kneel

5. When Christian in Turn Kneels For Ana

Following the previous incident, Ana finds herself even more confused about their relationship, knowing that she will never be able to give Christian what he wants: a submissive partner. But Christian is still willing to fight for what they have, and to prove it, he literally gets down on his knees to show that he is capable of submitting to Ana. Not romantic. Just odd.

6. When Christian Bursts Through the Door After His Accident

The two are finally in a good place — and even get engaged — before Christian goes missing in a helicopter accident. Ana is obviously overcome with fear as she waits with his family in his apartment, but all is well when he finally returns home. Of course, how it all goes down is pretty comical. Just moments after the news announces that he's been found on the TV, Christian bursts through the doors completely unharmed. Seriously, how did he manage to escape a burning helicopter without so much as a scratch? Because he's Christian Grey, duh.

Hocus Pocus
Hocus Pocus 2 Is Currently Filming, but Not at the Iconic Location You Know and Love
by Kelsie Gibson 13 hours ago