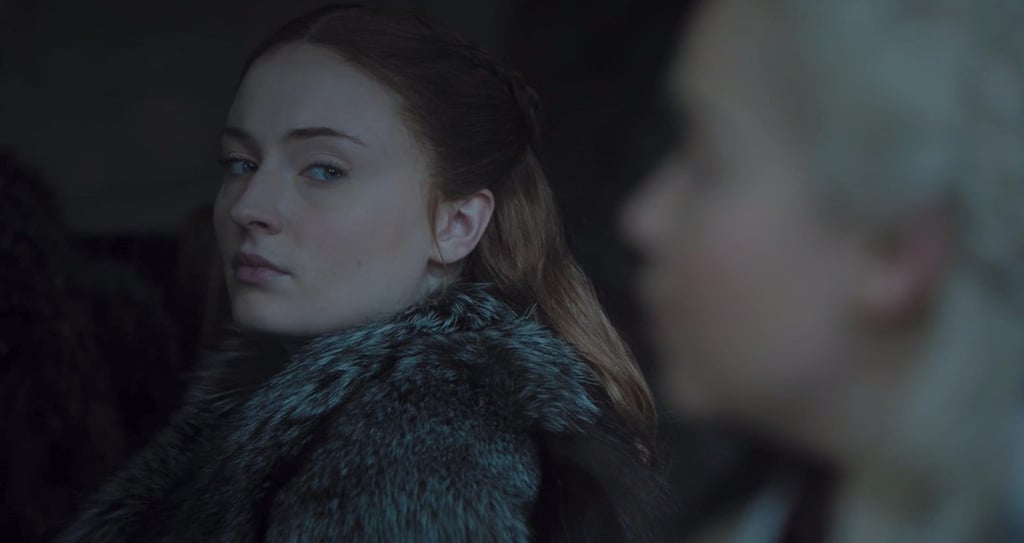 Warning: small, petty spoilers for the Game of Thrones season eight premiere ahead!

If there are two women that Game of Thrones fans have been anxious to see interact, it's the Lady of Winterfell and the Dragon Queen. Sansa Stark has been pretty blatant about her feelings for anyone who tries to take away the security of her home, but Daenerys obviously rubs her wrong in a big way. And it's not just because of the bad blood between House Stark and House Targaryen — which started because Dany's father killed Sansa's grandfather and uncle, and the world still believes Dany's brother Rhaegar raped Lyanna Stark. The redhead's wariness is compounded by the fact that the foreign queen managed to get Jon to bend the knee, which he did without consulting his family back at Winterfell. All in all, Sansa's not looking to make friends with anyone coming into her home and claiming what she rightfully won back.

When the two finally meet, Dany greets Sansa with a compliment and a smile on her lips. In response, Sansa gives her a long look (we felt the judgment through the screen, honestly) and a dry, "Winterfell is yours, your Grace." And thus, Sansa "Snark" was officially unleashed. Throughout the episode, the two women butted heads, with sly side-eyes and barbed remarks being openly exchanged while they spoke in front of the Stark bannermen. Jon tried to make light of the situation by joking about Sansa's fickle affections toward him, but Dany wasn't having it. The woman even starts saying something about how Sansa doesn't have to like her, but if she doesn't respect her . . . before she's cut off, and the subject isn't brought up again. When Jon confronts Sansa about it, she asks him the question fans have been wondering since season seven: "Did you bend the knee to save the North, or because you love her?" Jon doesn't answer.

So it's obvious that the tensions between House Stark and House Targaryen are far from over, especially since Jon now knows some big news that could change Dany's world completely. But fans couldn't help but revel in the drama between the two women, always able to find the humor in tense situations. Keep reading for some of the best reactions to Sansa and Dany's introduction in episode one, and get ready — we have a strong feeling things are going to get super rocky between these two before it ever gets better (if it ever does).

Related:
Let's Break Down the Game of Thrones Season 8 Premiere From Beginning to End
Previous Next Start Slideshow
Game Of ThronesTVTwitter Reactions

Little Kids
After More Than 15 Years Off Air, Reading Rainbow Is Returning to TV in 2022 With Multiple Hosts
by Chanel Vargas 5 hours ago

Opinion
The Sex Lives of College Girls Proves That Sex Can Actually Be About — Gasp! — Women
by Njera Perkins 7 hours ago

TV
Calling It Now: You're Going to Love Prime Video's New Show As We See It
by Monica Sisavat 8 hours ago

Selena Gomez
Adding to Her Stacked Résumé, Selena Gomez Is Producing Her First Spanish-Language Series
by Yerin Kim 8 hours ago

TV
Lolo Spencer Has Her DMs Open — but Pretty Please, Step Up Your Pickup Lines
by Naledi Ushe 9 hours ago