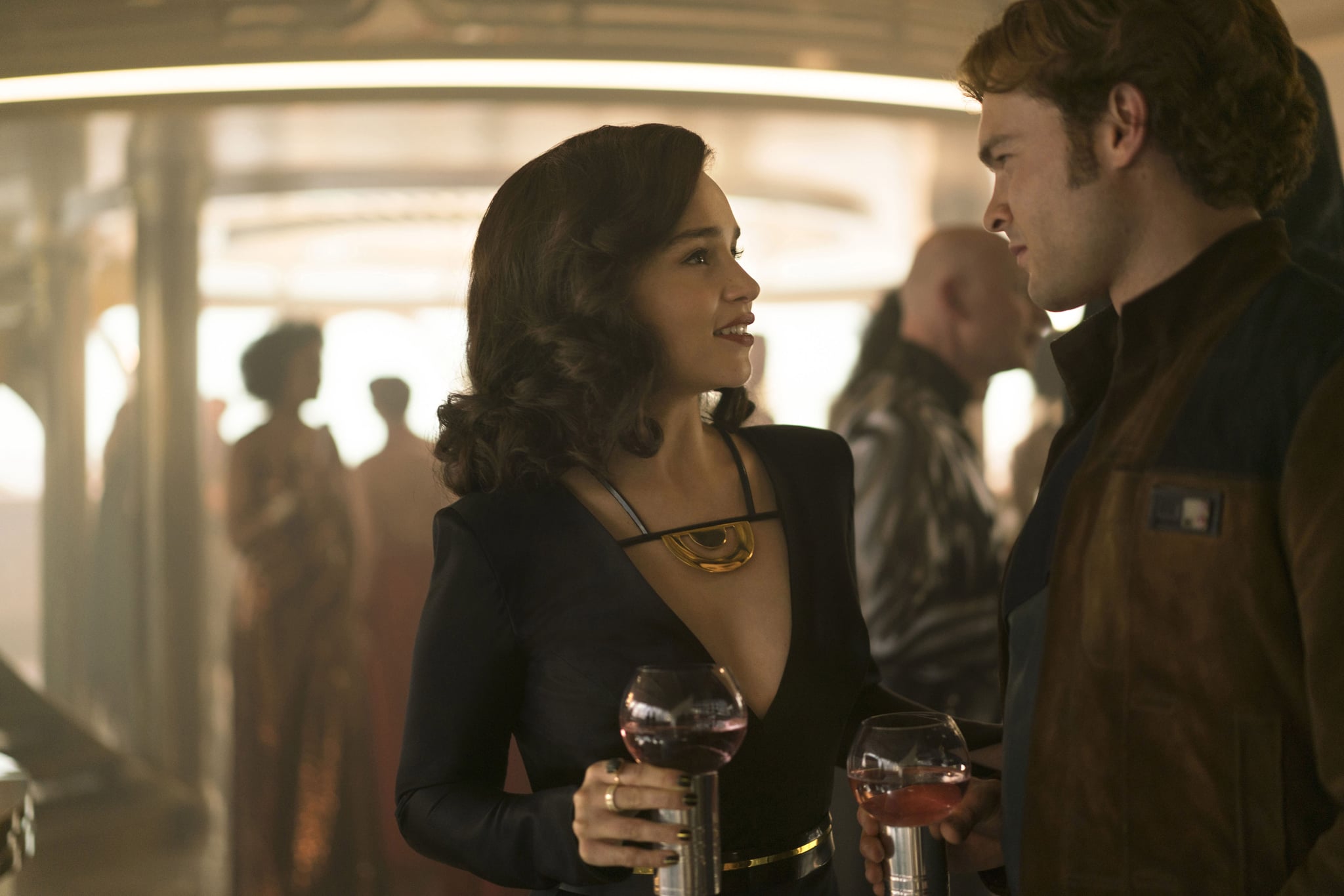 Warning: There are a bunch of Solo spoilers below, so stop reading now if you haven't seen it yet!

At its core, Solo: A Star Wars Story is a breezy, delightfully entertaining action-adventure film, but that doesn't mean it's shallow. The latest Star Wars stand-alone packs a lot into its 143-minute runtime, from Han and Chewbacca's meet-cute to an introduction to a kickass new droid, L3. It also dives into an organization called Crimson Dawn, which leads to a shocking — and ultimately kind of confusing — cameo in the final few minutes of the movie.

To set things up for you, Solo follows a young Han, Chewie, and Lando as they work with Qi'ra (Han's childhood friend and lady love), a spectacular droid named L3, and Beckett (a con man played by Woody Harrelson) as they attempt to pull off a major heist for the evil Dryden Vos (Paul Bettany), who runs one of Crimson Dawn's crime syndicates. The motley crew is tasked with stealing a large amount of coaxium, a rare and explosive substance that can power starships, from an Empire mining outpost. A Kessel Run and some close calls later, they're able to complete their mission and return to Vos with the coaxium in hand.

Related:
Here's How Solo: A Star Wars Story Fits Into the Rest of the Star Wars Universe

Of course, before they hand over the goods, Han decides that the coaxium fuel should instead go to Enfys Nest, a masked fighter who's been leading the charge on thwarting all of Crimson Dawn's attempts to get coaxium thus far. It's clear that she's a part of the blossoming Rebel Alliance and that Han's decision will go a long way toward financing the group's efforts. Good deed aside, Han's choice doesn't sit well with Vos. He dukes it out with Han and Qi'ra (Vos's former lieutenant), before finally being killed in the scuffle. Although she loves Han, Qi'ra takes advantage of Vos's sudden absence by stepping into his role. In other words, she's now in direct contact with the true leader of Crimson Dawn: Darth Maul.

We discover this when Qi'ra has a video call with the Sith Lord, who notes that they'll be working much closer together in the future. If you're confused, you're definitely not alone; after all, the last time we see Maul, it's when Obi-Wan Kenobi is slicing him in half in The Phantom Menace. Is it a Force Ghost of some kind? Is Solo taking place earlier than we thought? What's the deal?

Solo officially takes place at some point between Episode III — Revenge of the Sith and the Star Wars stand-alone Rogue One. Even though the deadly, red-faced villain does get sliced and diced by Obi-Wan on Naboo in The Phantom Menace (see above GIF), he apparently survives.

If you're only a fan of the main, live-action Star Wars films, then you likely skipped watching the animated series Star Wars: The Clone Wars and Star Wars Rebels, which Disney classifies as canon. It's in those two properties that Darth Maul makes a grand return. To give you the basics, Maul somehow doesn't die from his grievous injuries (again: being chopped in half). Instead he gets his hands on some robot legs and vows to get revenge on Obi-Wan and Darth Sidious with the help of his brother, Savage Opress. He actually doesn't die for real until an episode of Star Wars Rebels, when he loses a fatal lightsaber duel on Tatooine with Obi-Wan.

So, yeah — it's totally possible for Darth Maul to be alive during the time of the events in Solo. There's no telling how much of him we'll see in future Solo movies, but since Qi'ra is now heavily involved with Crimson Dawn, we imagine he'll play an important part in the story going forward.