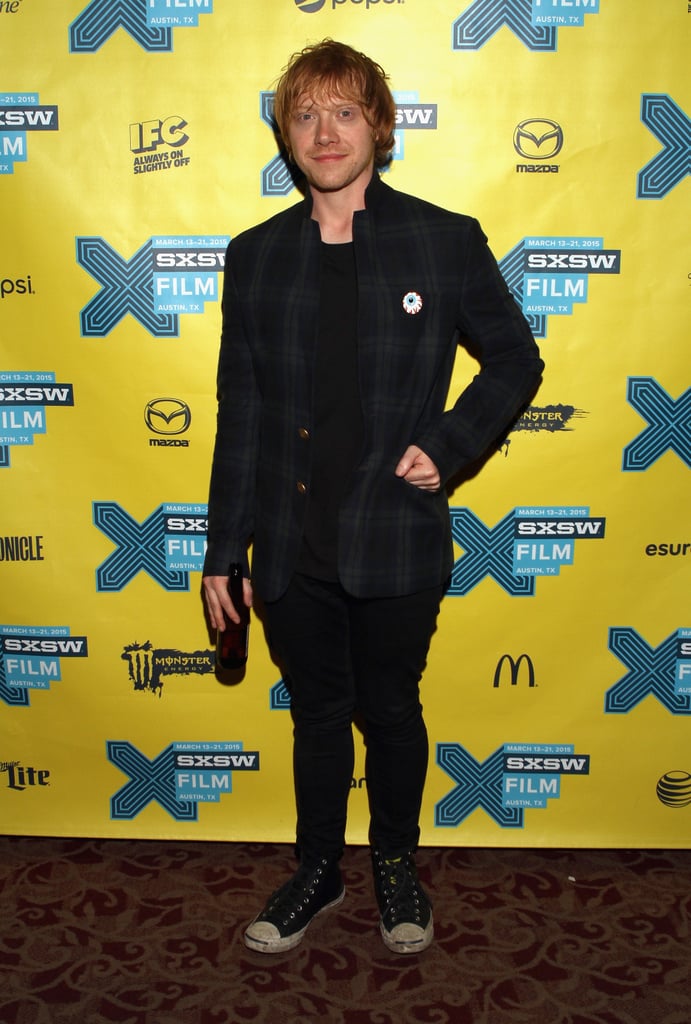 Rupert Grint stars in the upcoming film Moonwalkers as Jonny, a good-hearted yet blundering band manager, who — with the help of his drugged-up roommate Leon (Robert Sheehan) and an unbalanced CIA agent (Ron Perlman) — attempts to pull off the coup of a lifetime: faking the 1969 moon landing. While the film is a complete 180-degree turn from Grint's most famous role as the faithful and funny Harry Potter sidekick, Ron Weasley, his character does possess a few of Ron's characteristics: he's well-meaning, shows spontaneous moments of bravery, and sees things through until the end.

We spoke to Grint about what it was like to shoot the film, which is set in the '60s and based in London, and how he felt about working with the "terrifying, intimidating" Perlman. Of course, we couldn't not squeeze in a few Harry Potter-related questions: you'll have to keep reading to see what Grint had to say about his iconic role as Ron and the weird Harry Potter-related pickup lines he's heard. He also opened up about all the new, exciting happenings in the wizarding world, from the upcoming stage production of Harry Potter and the Cursed Child to how he would initiate Eddie Redmayne into the family ahead of Fantastic Beasts and Where to Find Them. Be sure to catch Moonwalkers when it hits theaters Jan. 15.

Lorde
Lorde’s Banger "Royals" Was Almost Ruined by a Record Label, and Now I'm Upset
by Naledi Ushe 5 hours ago

Penn Badgley
Penn Badgley Explains Why Fans Prefer You's Joe Over Gossip Girl's Dan, and He May Be Right
by Naledi Ushe 1 day ago