Anyone who really, really knows me knows how much I love Clarissa Explains It All and Sabrina, the Teenage Witch. Even though they are typically surprised to hear that I'm such a huge fan — and are probably a little weirded out when I tell them that I still watch both '90s classics as an adult — most people will end up asking, "So you're a big Melissa Joan Hart fan then, right?" Why, yes. Yes, I am. Besides the fact that she portrayed two of my favorite female TV characters ever (along with Carrie Bradshaw, Liz Lemon, Leslie Knope, and Olivia Pope), Hart has just always struck me as a cool person to talk to. As it turns out, I was totally right: I got the opportunity to chat with the actress, director, producer, author, and mom of three adorable boys and reflect on her pivotal roles in celebration of the recent release of Sabrina, The Teenage Witch: The Complete Series, now on DVD. 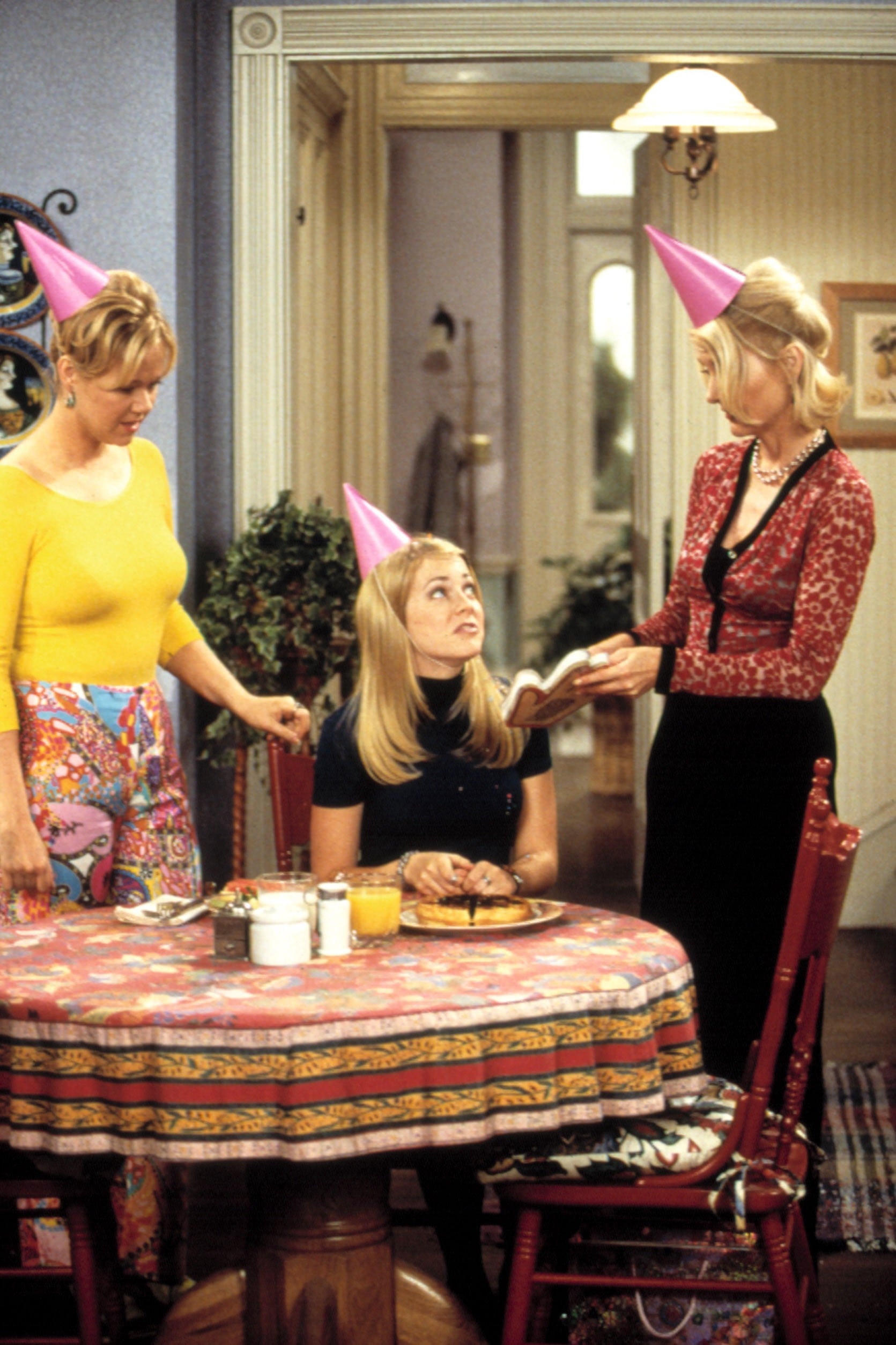 Hart and I had a casual chat on the phone as she was driving down the 405 freeway in LA on her way to an audition. Since her ABC Family show Melissa and Joey ended last year, she's been living in Connecticut with her husband, Mark Wilkerson, and their sons Mason, Brady, and Tucker — "the life I planned for myself," she told me — and easing her way back into acting. Most recently, she "ran off to Arkansas" to film the drama God's Not Dead 2 and is soon heading to the UK to direct the remake of a thriller that she wasn't allowed to tell me the name of. In mid-March, Hart is also launching Queen of Harts, a girls' line of graphic t-shirts that will accompany her successful King of Harts clothing collection.

I like to think that I impressed her with my extensive knowledge of Clarissa Darling facts and Sabrina Spellman trivia during our conversation — but even if I didn't, I couldn't have been happier to pick her brain about everything from her favorite episode to shoot to where Sabrina and Harvey would be now . . . and perhaps the biggest question on fans' minds: will there be any reboots? Keep reading for all the goods.

POPSUGAR: Is it crazy to see this whole new generation of people seeing Sabrina for the first time?

Melissa Joan Hart: Absolutely. The show has had legs for so long now, and it's been in syndication forever. It's really nice that people will get a chance to see it again, especially when everyone is doing their reboots.

PS: Speaking of which . . . I'm personally not a huge fan of TV reboots, but I'm sure you get asked all the time about the possibility of doing one. What would you say to Sabrina fans who are really dying for a revival of the show?

MJH: I've gotten emails about it recently. If it's done right, then why not? If there's a great writer, and brilliant premise . . . but I do think the seventh season [of Sabrina, the Teenage Witch] couldn't have wrapped up nicer. Harvey and Sabrina riding off on a motorcycle while No Doubt played — sorry for anyone who hasn't seen it yet [laughs] — but fan fiction is probably going to end up being better [than a reboot]. Everyone has different ideas, and fans will end up imagining bigger and better things than we could probably ever do. It's a tough thing to do correctly.

PS: How much of Sabrina Spellman reflected your own personality?

MJH: To be honest, I related to Clarissa more. She gave me as much as I gave her; confidence and a guideline for how to grow up and be the woman I wanted to be.

PS: She definitely inspired me as a kid too. I was obsessed with her.

MJH: Clarissa shaped so many lives. We had brilliant writers who all went on to do really great things. It was pretty groundbreaking — the first Nickelodeon show with a female lead, and one that boys watched, too . . . but my favorite thing about playing Sabrina was getting to become all the different characters Sabrina did throughout the show.

MJH: [Laughs] Yes! I think I played a Rapunzel character three or four times. Every episode was at least one, if not more, different characters. I've met people like [Sabrina], but she did always want to be a wallflower and fit in, which is the opposite of myself and Clarissa. Clarissa was about shaking it up and standing out — I'd say I'm somewhere between those two.

PS: Do you ever just kick back with a cocktail and watch old episodes?

MJH: I don't. Clarissa was 65 episodes, and Sabrina was 163. I barely have time to binge-watch the shows I really want to watch, let alone watch those back. It seems so foreign — it's like sitting down and watching home videos of yourself all day. Or like reading your old diary.

PS: I did that recently, and it was terrifying.

PS: Have your kids seen either show?

MJH: They've seen an episode here and there, but it's not really their speed yet. Once the 'that's Mommy!' thing wears off, they're over it. I try to show them the 'funny cat,' but they lose interest pretty quickly.

PS: Yeah, can we talk about the cats for a second? I know there was an animatronic cat and a real cat that played Salem — was it ever a diva?

MJH: In both cases, you're at the mercy of something that's out of your control. We had seven cats on the set at any time: one jumping cat, one that was held, one that ate, one that chased string. They all had different temperaments and different levels of energy, and sometimes there would be like, three cats in one scene.

PS: My favorite Sabrina episode is probably 'Pancake Madness.' What was your favorite one to shoot?

PS: No way! I just loved that Sabrina had no idea she couldn't eat pancakes until that one moment in time that she was craving them.

MJH: Our writers were so brilliant — they were so smart about the way they developed those types of things. It wasn't a traditional sitcom, and it wasn't easy to do. It was one of the first hybrid shows, using a single camera and multi-camera format. Most shows have about 10-15 scenes a week, and we did over 30; it was like we were filming a little movie every week! There was a lot of action, special effects, and wardrobe. A lot of the budget went to wardrobe and music — and cats.

PS: Where do you think Sabrina and Harvey would be now?

MJH: I think they'd be living in the suburbs with a few kids. Sabrina always wanted to be as normal as possible! Did she ever use her powers again, would be the real question. I don't think she would have gone after a magical hero-type lifestyle; I think she'd lay low and probably use magic for her domestic skills, doing chores, and making meals with non-GMO products [laughs].

PS: I wonder if she would pass down any powers to her kids, since she was half mortal?

MJH: I get so many tweets and emails about that. 'You should do a show about Sabrina's kids being half witch,' and I'm like, 'Well, they'd actually be a quarter.'"

PS: Right, like pay attention, that's a pretty big detail. What about Libby? What would she be up to?

PS: Because she's gone through so many of her own.

MJH: Exactly. She'd be on The Real Housewives of Salem, MA.

Music
Gia Woods Is Back With New Lesbian Anthem, "Lesbionic": "It's a Female Empowerment Song"
by Reilly Lucas 19 hours ago