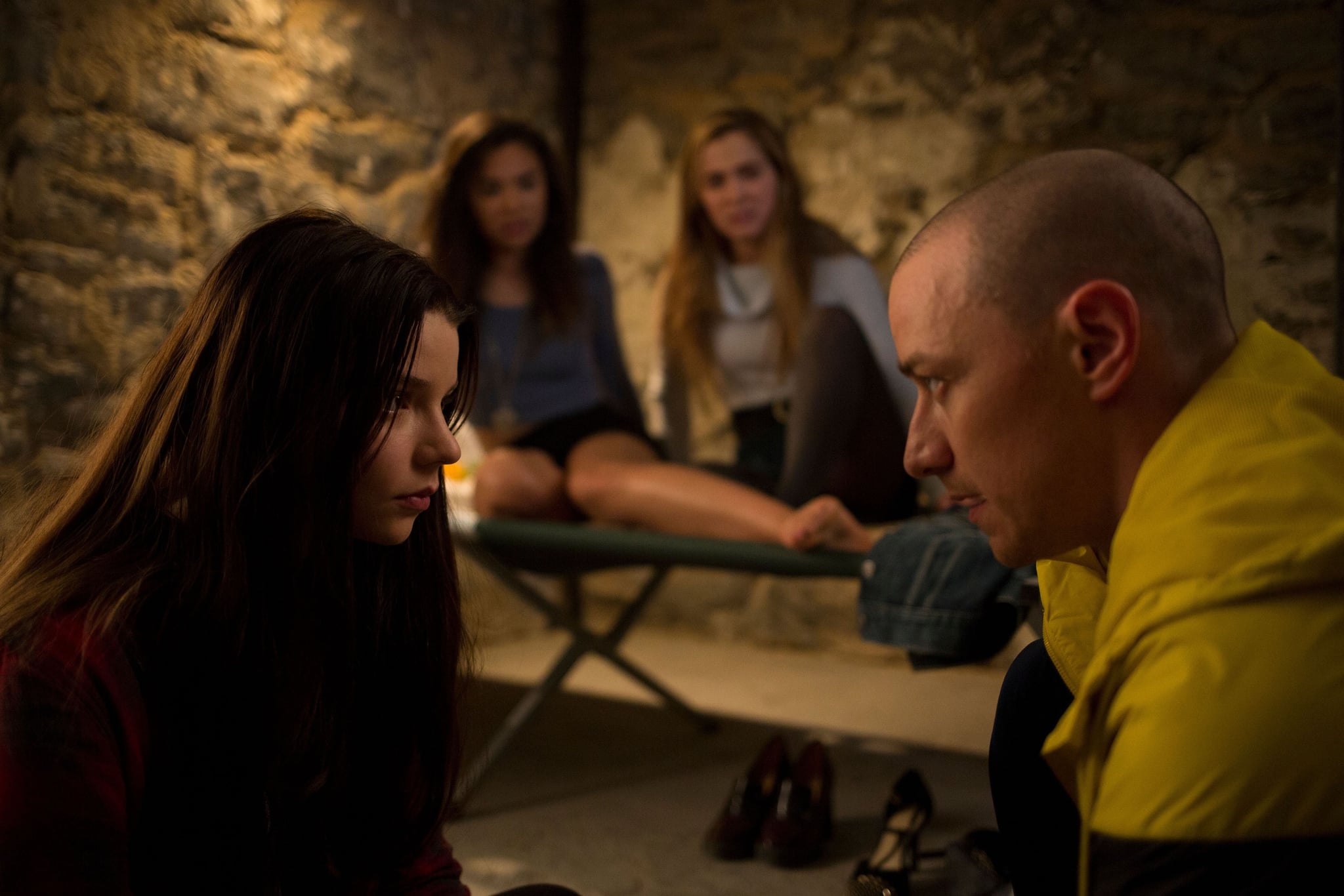 M. Night Shyamalan first gained fame with The Sixth Sense, thanks to its brilliant, original twist ending. Since then, the director has been chasing the ever-elusive high of a similarly successful and mind-blowing surprise, which he's attempted in his successive horror and sci-fi films like The Village, Signs, and Unbreakable. Although those failed to deliver the same impact, his 2015 found-footage flick The Visit seemed to herald a return to form for Shyamalan with its simple story and fantastic, shocking conclusion. With that in mind, the writer-director's latest entry into the horror genre, Split, looked like it might be a twist-filled slam dunk at the box office.

Although the film suffers from a few bloated, meandering storylines and the ending will leave some rolling their eyes, there are enough creepy, terrifying moments (and incredible performances) scattered throughout Split that will no doubt make it a notable notch on Shyamalan's belt of accomplishments.

Spoilers for the ending of Split below!

So, What's the Deal?

James McAvoy stars, er, acts his ass off as Kevin, a man with dissociative identity disorder struggling to keep all 23 (that's right, 23) of his wildly different personalities in check. Unfortunately for him and the three teen girls he kidnaps in a mall parking lot (Anya Taylor-Joy, Haley Lu Richardson, and Jessica Sula), three of his unpredictable, vindictive "alters" take control: Patricia (a strict, pious British woman), Dennis (a solemn, muscular pervert with OCD), and Hedwig (an energetic 9-year-old boy). The girls are taken to an underground bunker of some kind and held in a windowless cell by Dennis, who instructs them to strip off their clothes, but not to worry because he's "not allowed" to touch them. All three of the girls — Marcia (Sula), Claire (Richardson), and Casey (Taylor-Joy) — are repeatedly told by the alters that they'll serve as "sacred food" for Kevin's 24th and final personality, known as the Beast. 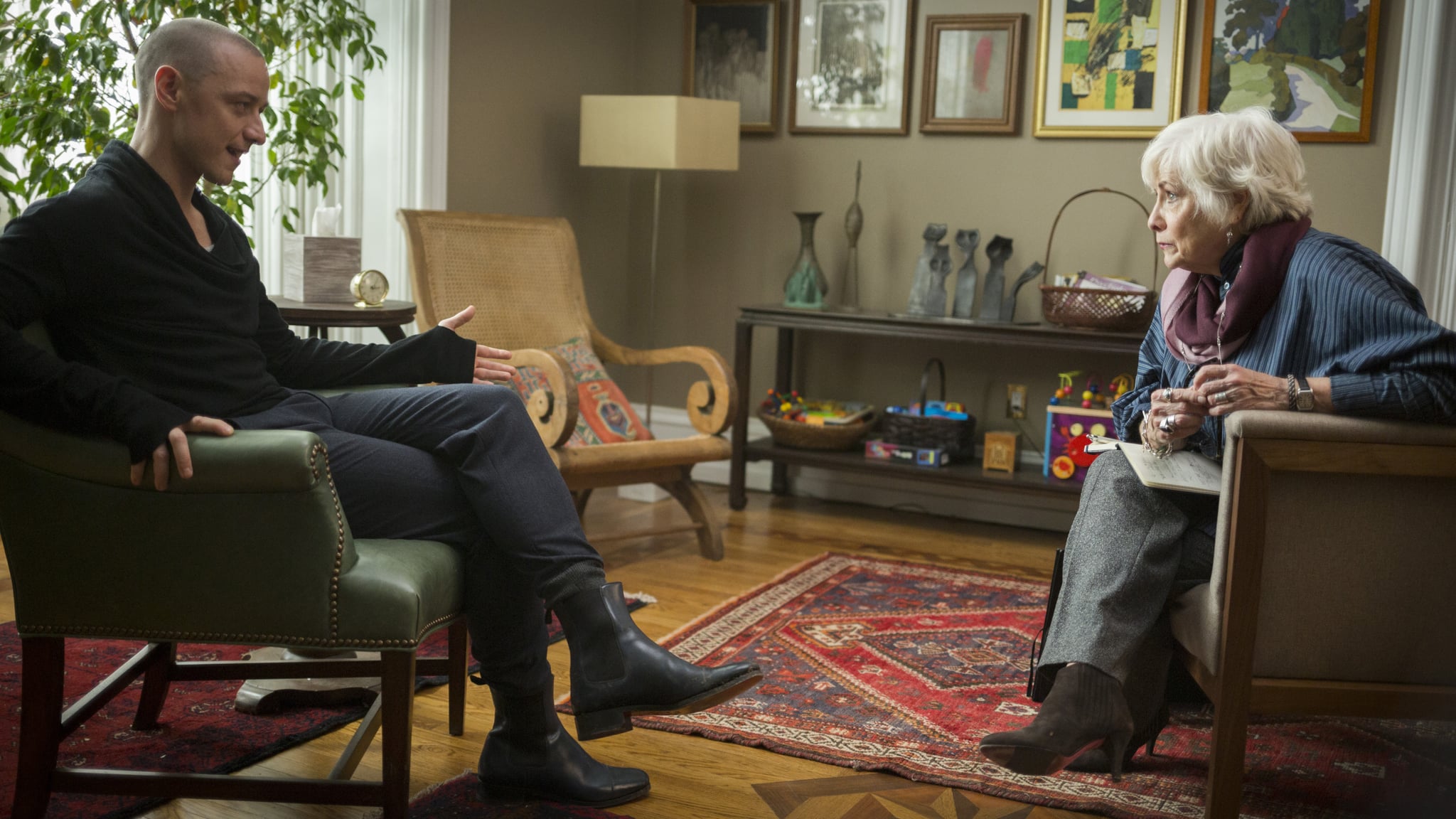 Wait, but How Has Kevin Been Living All These Years Like This?

With the help of his psychiatrist, Dr. Fletcher (Betty Buckley). Dr. Fletcher almost only ever speaks to "Barry," Kevin's sweet, outgoing, fashion-obsessed personality, but she approaches his unique condition with compassion. He's been a patient of hers for the last 10 years, helping with her research into the phenomena of DID patients who are able to change their physicality to match their corresponding personalities (ex: how one personality might have high cholesterol or diabetes, while another does not). Now that Dennis, Patricia, and Hedwig have taken control of Kevin, Barry and the other personalities struggle to alert Dr. Fletcher to what's truly going on. Kevin has been slipping into brief fugue states late at night, which is when Barry is able to grasp control and email Dr. Fletcher that they need her help. Dennis attends the appointments with her masquerading as Barry so as not to raise her suspicions. Unfortunately Dennis's OCD tendencies get the better of him and she begins to realize something is dreadfully wrong.

At their next appointment, Dr. Fletcher gently confronts Dennis about what she saw. She's gradually able to gain his trust and he reluctantly tells her about the Beast. According to Dennis, the Beast has claws, a long mane, and can crawl on the ceiling. He's much taller and more muscular than even Dennis. He appeared only once before at a train yard when Kevin was a child, which Dr. Fletcher chalks up to the fact that Kevin's father abandoned him at a train station. She tries to explain to him how Dennis, Patricia, and Hedwig were likely brought on after an incident that happened at Kevin's workplace (two teenage girls put his hands under their shirts) that triggered memories of him being abused by his mother as a child. She doesn't really believe that an actual Beast will show up, but makes it clear that she supports him nonetheless. 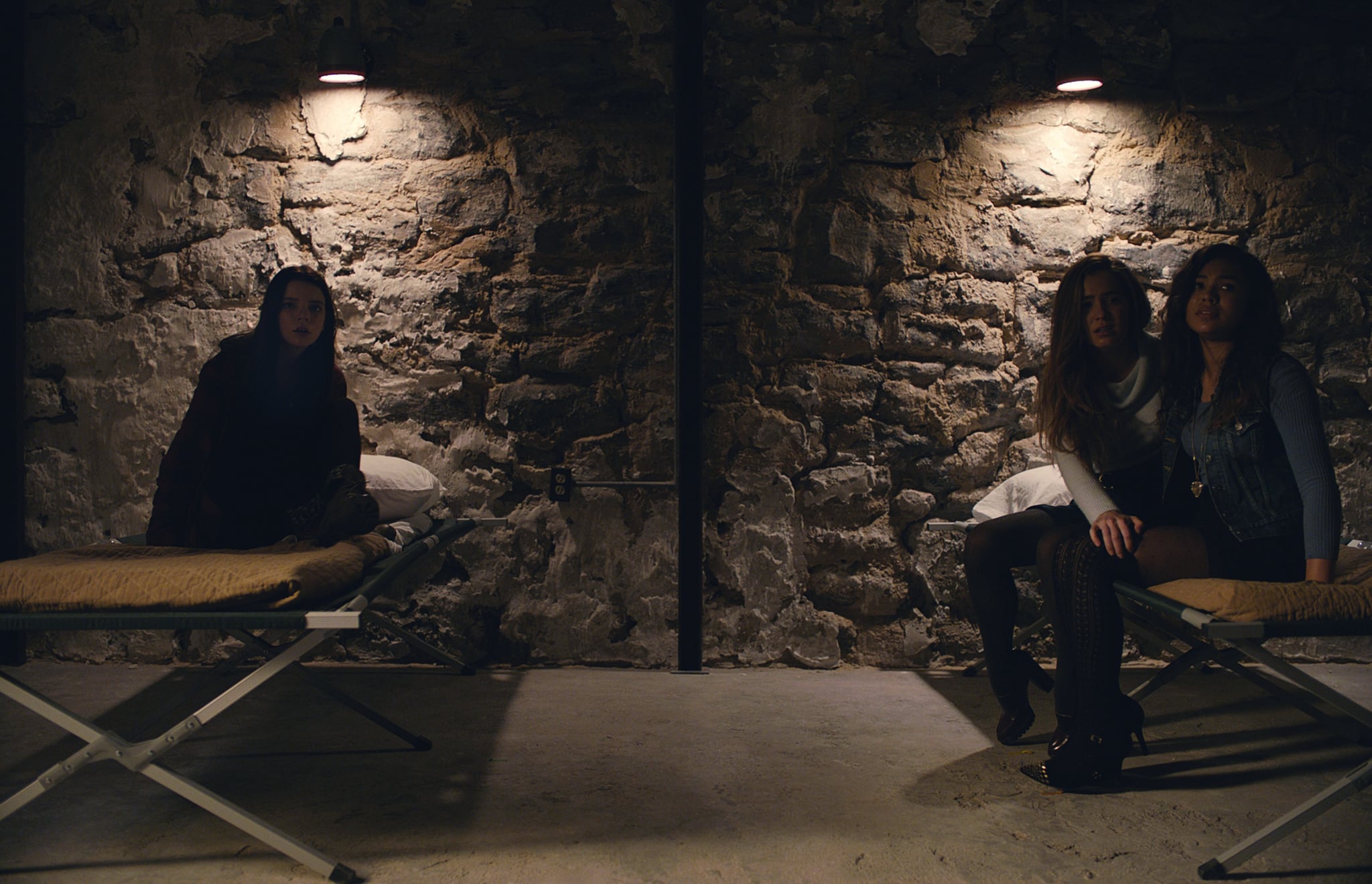 Where Are the Girls During All of This? Knitting?

Not exactly. It's immediately clear that although Claire and Marcia are BFFs, Casey is the outcast (they were abducted after Claire's birthday party, which Casey was only invited to out of pity). While Claire is itching for the three of them to team up and overpower Dennis/Patricia/Hedwig, Casey is much more observant. When Dennis drags Marcia out of the room, Casey whispers to her to pee on herself so he won't want to touch her (which she does and it works). She realizes how strong Kevin's personalities are and tells Claire that her "six months of karate lessons at the King of Prussia Mall" won't help her now (ooh, burn).

They discover that there is a vent in the ceiling that one of them can escape from, so Claire makes the first attempt despite Casey's pleas not to. She's able to make it to a hallway outside the room, but Dennis quickly finds her and locks her up separately from the others. Quick flashbacks to Casey's childhood reveal that she was sexually abused by her uncle as a very young girl (a particularly disturbing scene features him stripping naked in the woods and asking her to "be an animal" with him). It only got worse after her father died and he became her legal guardian, which is why she's a loner and able to shrewdly assess their attacker.

Now that Casey and Marcia are on their own, they devise a way to get Hedwig, the most vulnerable of the alters, to help them escape. He's very fond of Casey (getting into bed with her while she's sleeping, telling her about his obsession with Kanye West . . . ), and she's able to manipulate him into bringing her to his room with a window (she has to kiss him first, though). Before that happens, Patricia takes over and brings the girls into the bunker's kitchen to make them a sandwich. Marcia tries to escape, but is also caught and locked up alone in a room next to Claire's. Later on, Casey finally gets Hedwig to make good on his promise, but when she gets there she sees that the "window" is simply a child's drawing of a window taped to the wall. She breaks down, knowing that time is running out for her, Claire, and Marcia. 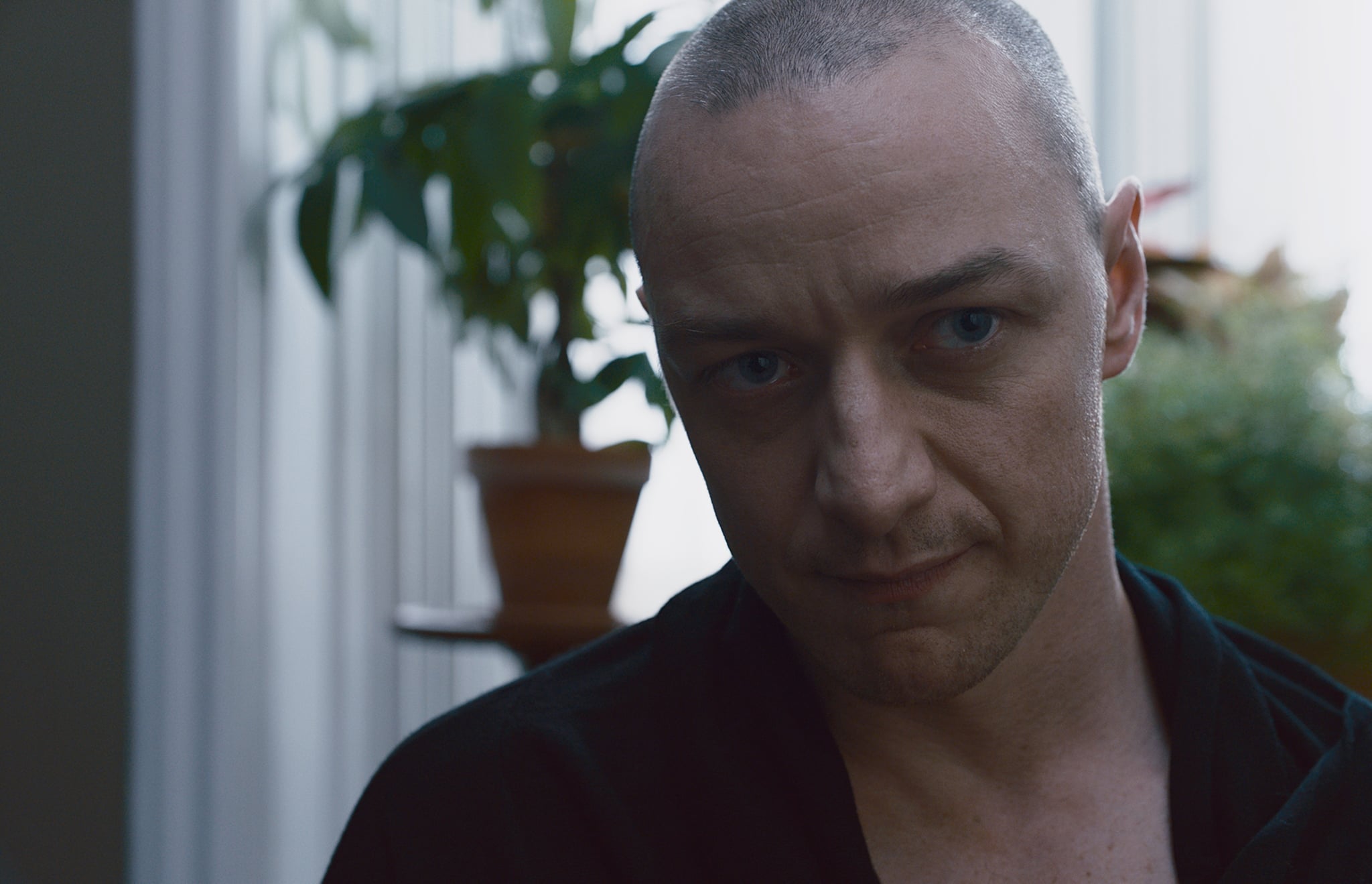 Is the Beast Real, or What?

The time finally comes for Dennis, Patricia, Hedwig, and the rest of the alters to make way for the Beast, and boy is it something. Dr. Fletcher, intuitive enough to know something horrible is about to happen, shows up at Kevin's home (which is then revealed to be a bunker under the Philadelphia Zoo, where he works as a janitor). Dennis greets her and brings her downstairs, where she knows something's up. She asks to use his bathroom, discreetly stuffs a napkin in the lock of the door so she can't be locked in, and comes across the dead-bolted room holding a starving and hallucinating Claire. Dennis tells her not to worry and that it can all be explained and then sprays her in the face with a gas that knocks her out.

Then, Dennis goes to a train station, finds an empty train, takes off his shirt, and transforms (yes, actually physically transforms) into the Beast. He's more muscular, his veins are glowing a light green, and it looks like he's grown a bit (no mane or claws though, sadly). He runs at superhuman speeds back to the bunker, grunting like a maniac. With the Beast on his way back, Dr. Fletcher groggily comes to and writes out a note for whoever finds her that if they say Kevin's real, full name ("Kevin Wendell Crumb"), it will make him revert to his original personality and stop the Beast. Meanwhile, Casey breaks out of her cell and comes across a ring of keys that she's hoping will help her escape.

The Beast returns to the bunker and kills Dr. Fletcher by holding her in a reverse bear hug until all the bones in her body snap in half. This is the kicker, though: she gets a knife while he's doing this and stabs him multiple times in the stomach, only to pull the knife back and realize that it's shattered against the Beast's extremely strong skin. Her theories about physicality have finally been proven true, in the worst possible way. Casey runs around the bunker looking for Claire and Marcia and finds the latter lying dead in a pool of blood in her room with her intestines hanging out, as if she'd been partially eaten by an animal. Frantic, she goes to Claire's room, where Claire lets out one final cry before being eaten alive by the Beast. Casey sprints out of there with the Beast hot on her trail and finds Dr. Fletcher's body and the note. He finds her and begins crawling on the ceiling above her (playing with his food, I guess?), but she's able to say his name and bring Kevin back to the surface. He de-puffs, and is completely confused, telling Casey that the last thing he remembers is being on a bus in 2014. He instructs her to grab a gun from a hiding place and kill him before the other personalities take over again, just as they do.

She gets the gun and runs down to the end of the bunker, where she has an intense showdown with the Beast. She shoots him twice and the bullets merely cut his skin, barely harming him. But then, with Casey wearing only a thin tank top, he notices all of the self-harm scars that cover her arms and shoulders. Suddenly he pulls back and in a calm British voice explains that, actually, he doesn't want to kill Casey after all. He sees his own trauma mirrored in her and runs off, leaving her slumped and shocked. In the morning, another zoo employee finds her and leads her outside, where she's put in safekeeping while the cops go looking for the Beast (who is shown tending to his wounds with the help of Dennis, Patricia, and Hedwig in some abandoned home somewhere in Philadelphia). It's hinted that Casey finally tells a policewoman about what her uncle has been doing to her all these years.

It's an M. Night Shyamalan movie — of course there's a twist. Only, it's probably not what you're expecting. After Casey and the Beast's storylines are wrapped up, the film flashes to a diner in the city. A newscast is on the TV discussing what happened to Casey, Claire, and Marcia and reports that Kevin is still on the loose. Two women start chatting about it at the counter, saying that it reminds them of "that guy in the wheelchair" from a few years ago, but they can't remember his name. "Mr. Glass," says David Dunn (Bruce Willis), popping up next to them, connecting the Split universe to the one in Shyamalan's 2000 film with Willis and Samuel L. Jackson, Unbreakable.

Matt Damon
Ben Affleck, Matt Damon, and Viola Davis Team Up in New Movie About the Rise of Air Jordans
by Victoria Edel 10 hours ago