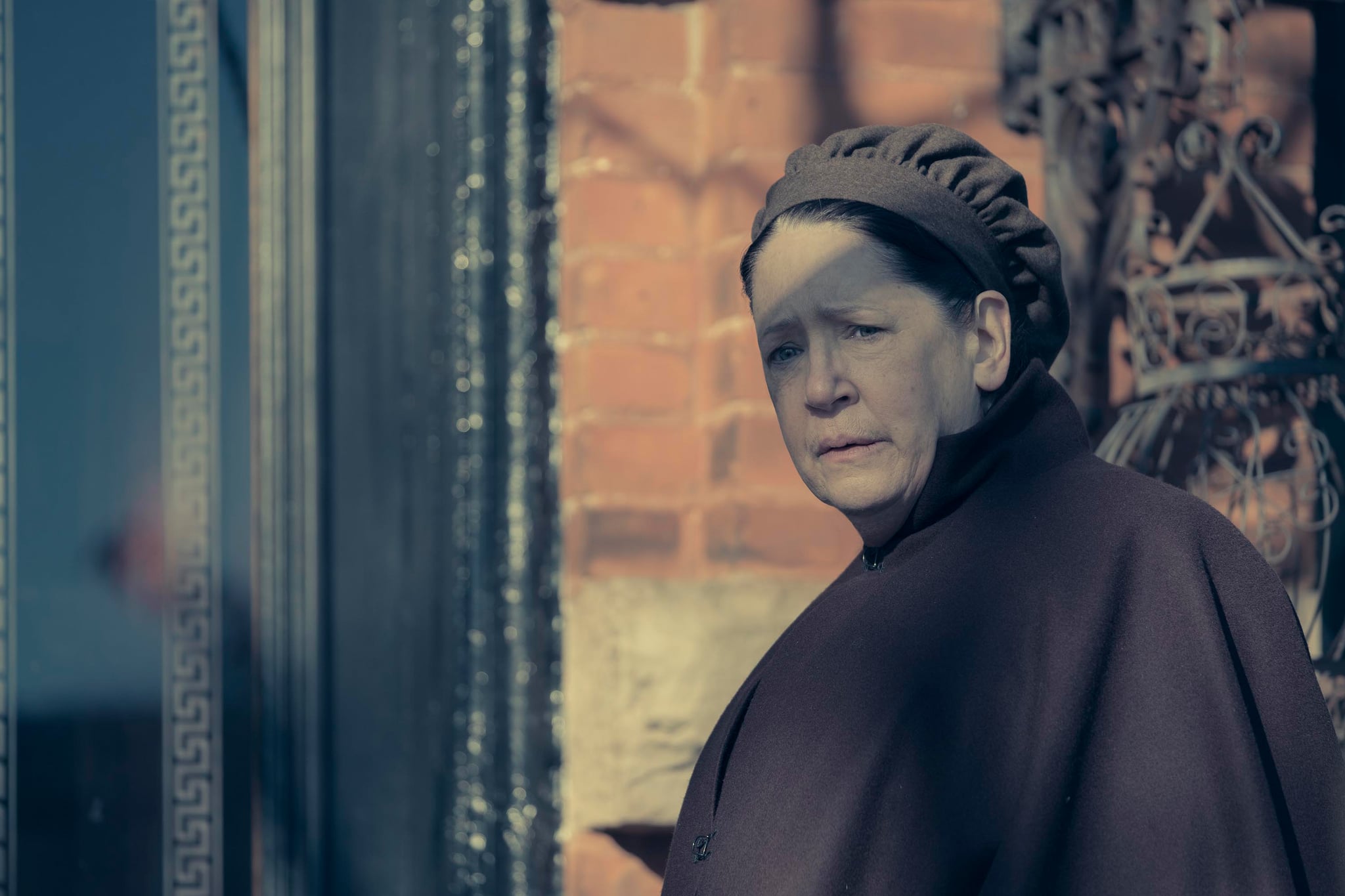 Warning: Some season three spoilers for The Handmaid's Tale ahead!

Ann Dowd as Aunt Lydia is perhaps one of the best parts of The Handmaid's Tale. Her twisted character vacillates between pure evil and showing manipulative acts of compassion to her subordinates. While she's not gone or dead, Aunt Lydia appears less frequently in the third season premiere, and for good reason. If you've forgotten what happened to her, here's a little recap to refresh your memory about her brutal fate in the last installation of the series and how the incident has impacted her now.

Aunt Lydia has done a lot of terrible things to women in Gilead, literally carrying around a cattle prod to intimidate handmaids into submission. After Emily, a handmaid labeled a gender traitor for being a lesbian, undergoes a clitoridectomy for having an affair with a Martha, Aunt Lydia tells her that she won't want what she can't have. Emily, understandably, vows revenge. She goes through a lot even after that experience, especially after her stint at the dreadful Colonies. This adds to the rage that builds inside of her.

By the end of the second season, the former scientist ends up at Commander Lawrence's house as his new handmaid, although he doesn't force her to go through a Ceremony with him. Aunt Lydia pops up at the Commander's house and does a little check-up on Emily, who doesn't reply to her. Lydia proceeds to call her a "degenerate" and says that it's like she had cut out Emily's tongue. Clearly triggered, Emily snaps and stabs Lydia violently in the back, pushing her down a flight of stairs and repeatedly kicking her, à la John Wick. Lucky for Emily, Lawrence helps her and June's baby Nichole escape, even though his motivations aren't crystal clear.

At the beginning of season three, Emily makes it to Canada, and we find out Aunt Lydia is still alive. Still, she's rather weak after getting the ever-loving crap kicked out of her, so it makes sense that she's spent some time away to recuperate. Again, Aunt Lydia visits Commander Lawrence to check up on June, who is now his new handmaid. He casually lies, telling her that their Ceremony was "aces." She's definitely suspicious of him after getting attacked in his house, telling June to let her know if he does anything "unseemly." But don't think that Aunt Lydia is a saint. When June tries to help her up the stairs to see her room, Lydia tases her, saying that she wouldn't have assigned June to a new post after the stunt she pulled at the Mackenzies, when she went to try to find her first-born daughter. Harsh much?

With a weakened Aunt Lydia and her newfound friendships with the Marthas, June might be able to escape Gilead sooner than we think. After all, the society has plenty of Aunts, so how much powder does Lydia really have? On the contrary, Lydia might go down even harder on June now that she's clearly suspicious of Lawrence. Lydia is too interesting of a character to kill off, but if anyone's going to send her to her grave, now's an opportune time to get things in order. Needless to say, it'll be interesting to see where season three takes this deeply disturbing character.