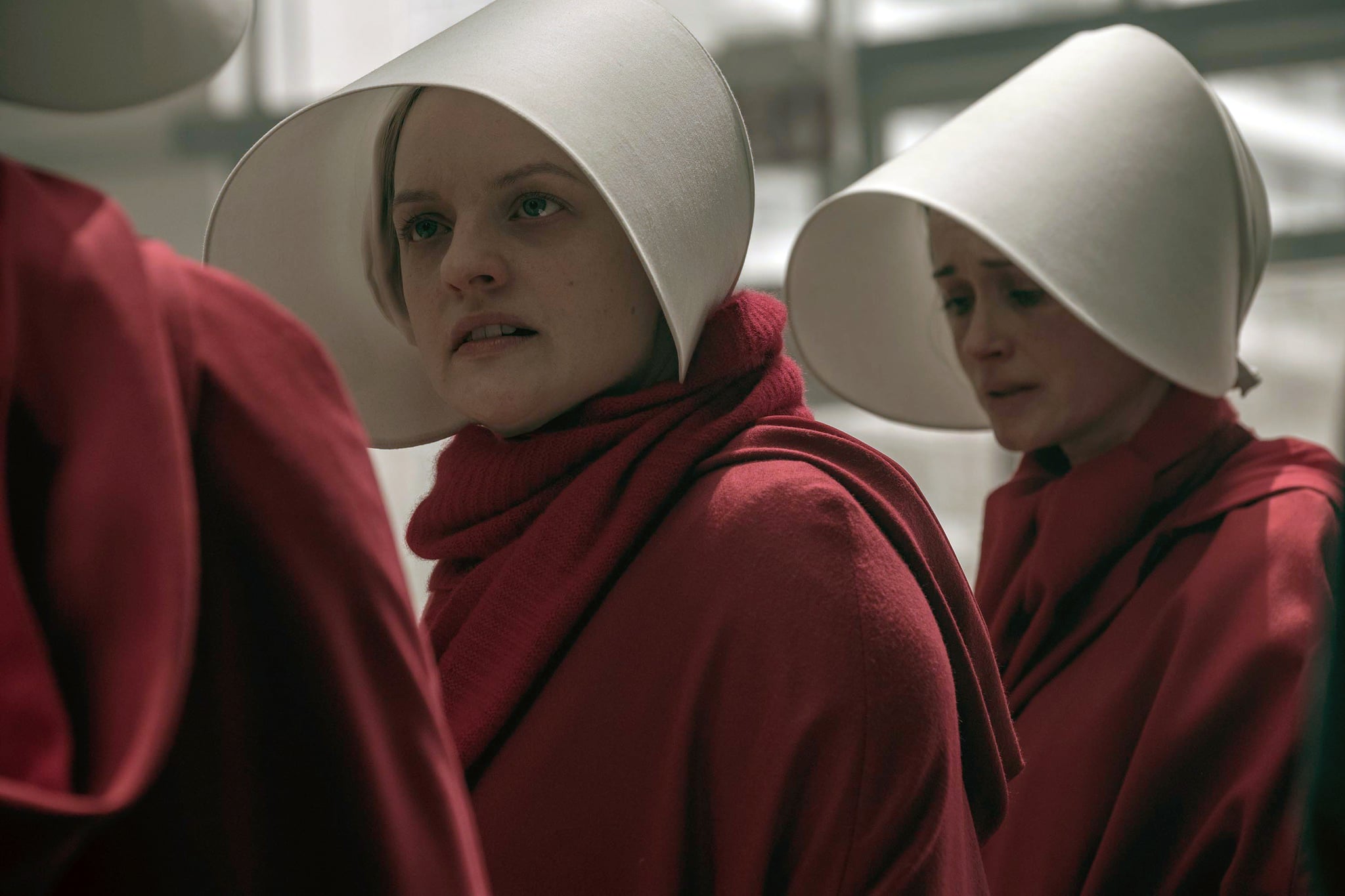 Warning: Needless to say, this recap is packed with Handmaid's Tale spoilers!

Just a year ago, Hulu's The Handmaid's Tale hit the ground running with a harrowing second season that expanded well beyond Margaret Atwood's original novel. Through the dystopian worlds of Gilead and the Colonies, season two underscores not only issues concerning women's rights but also those related to environmentalism and family separation. When you add June's pregnancy, love triangle, and backstory into the mix, you get a whole lot of momentum for relevant and compelling TV.

Unsurprisingly, there's a ton of anticipation for season three, which is slated to come out on June 5. Still, it's been about a year since we last saw new episodes, so if you've forgotten some of the details, you're definitely not alone. Read ahead to refresh your memory of the most important twists and turns from season two of The Handmaid's Tale!

The new Ofglen sets off a bomb at the opening ceremony of the Rachel and Leah Center.

The bombing kills 26 commanders and 31 handmaids. Plus, it leads to other consequences that change up the course of the second season. Emily and Janine (initially exiled) return to Gilead from the Colonies because there's a shortage of handmaids. Serena also recruits June's help in overlooking Fred's duties while he's recuperating in the hospital. She goes as far as having his colleague Commander Cushing arrested. Being the monster that he is, Fred reacts cruelly to being undermined and, in a very chilling scene, beats Serena when he finds out.

Nick meets with Luke and hands him June's letters.

When the Waterfords visit Canada, Nick stops by to meet with Luke and lets him know about June's whereabouts, including her pregnancy. It's awkward because Luke doesn't know that Nick, and not the Commander, is actually the father of June's baby. But anyway, he hands off June's handmaid letters to Luke, who publishes them with Moira and Erin. This pressures the Canadian government to cancel the Waterfords' diplomatic summit. A man named Mark offers Serena immunity if she agrees to denounce Gilead, but she ends up refusing his offer.

Fred, aka one of Gilead's worst human beings, plays around with the idea of allowing June to see her daughter. After sexually assaulting the handmaid, he arranges for her to briefly visit Hannah in an abandoned home. Nick gets captured, and the Waterfords are unable to track June, who is hiding in the house after meeting with Hannah. June gives birth by herself, naming her daughter Holly after her mother, though Serena later renames the baby Nicole when they track down June.

We learn about Serena's past life.

Prior to the establishment of Gilead, Serena was a passionate conservative activist who wrote a book called A Woman's Place. In the past, a protester shot her in the abdomen, which likely rendered her sterile. Because of the patriarchal society Serena created, she ironically gets a limited role because she is a woman. Later, Serena does try to step up by rallying for an amendment to let girls read the Bible but gets her finger cut off as a result.

Just in case you forgot how f*cked up this society is, Nick gets "gifted" with his wife Eden, who is practically a teenager. Eden does her best to please Nick, but he mostly rebuffs her advances because he's in love with June. Anyway, Eden elopes with a guard named Isaac, and she gets turned in by her own father. In a public execution, the young couple drowns after getting pushed off of a diving board.

Emily stabs the hell out of Aunt Lydia.

In a fit of rage, Emily violently stabs Aunt Lydia, who drops by for a visit to check up on her ceremony with Commander Lawrence. Don't worry — this definitely isn't the last of Ann Dowd in the series.

During a fire in the season two finale, Rita informs June that she and Holly can leave Gilead. Nick stops Fred from capturing June, and Serena relents to her escape after saying goodbye to the baby.

Anyway, Lawrence helps the handmaids. We still don't know what the deal is with him, given that he's one of the architects of Gilead. He doesn't go through the initiation ceremony with Emily and later even helps her and June escape on a van, saying that he's getting himself "into deep sh*t" by doing so. While Emily hops on, June hands off the baby to her, shockingly choosing to stay behind.