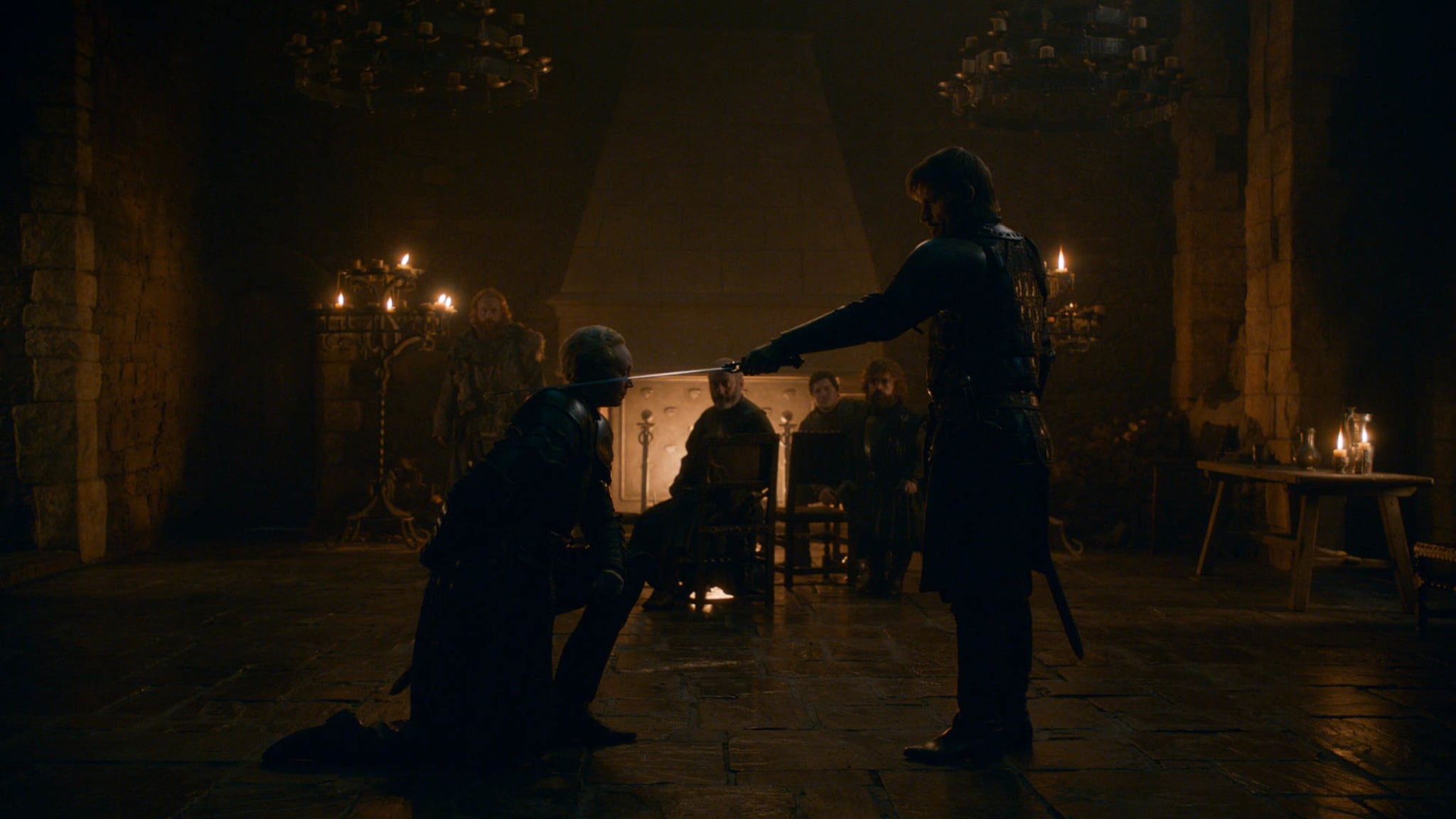 Warning: spoilers for the most recent episode of Game of Thrones ahead!

Game of Thrones treated us to a number of emotional moments during the eighth season's second episode. Daenerys and Sansa make amends . . . sort of. Arya and Gendry unite in a moment of passion. And by far the most heartwarming in the episode, Jaime Lannister and Lady Brienne of Tarth form their own connection as the Kingslayer uses his power as knight to grant Brienne the formal title of "Ser," which denotes her as a knight of the Seven Kingdoms.

Related:
Game of Thrones: How Brienne's Words to Jaime at the End of Season 7 Made a Lasting Impact

As we examine the words spoken to grant her title, we can all agree that Brienne has been more knightly than anyone we've seen — in fact, even the showrunners of Game of Thrones agree, saying on the "Inside the Episode" segment that "Brienne has been more knightly than any of the knights" we've seen, calling her "a paragon of strength and honor and being true to your word." From her loyalty to King Renly Baratheon in the War of the Five Kings to her fealty to Catelyn Stark, we can't agree more. While long thought impossible due to her status as a lady and the sole heir of Lord Selwyn Tarth of Evenfall Hall, this ceremony not only validates her work as a warrior on the battlefield and her commitment to the Starks, but also confirms that she's won the respect of her peers, particularly Jaime Lannister for whom she holds deep feelings she hasn't yet come to terms with.

The significance of the pair's relationship actually begins in a season two episode titled "A Man Without Honor," named for Catelyn Stark's words to Jaime Lannister after he kills Alton Lannister, his own kin, in an attempt to escape imprisonment by the Starks. During his confinement, he meets Brienne who enters the encampment with Lady Stark. Jaime then hurls the first of many insults towards Brienne, calling her a beast whereupon Catelyn Stark turns the tables replying that Brienne is a truer knight than Jaime will ever be.

In the episodes that follow, Lady Stark orders Brienne to transport Jaime from their camp to King's Landing in order to secure the safety of her daughters. While on the road, Brienne and Jaime's mutual disdain grows into respect as Brienne's code of morality worms its way into Jaime's heart — as seen in the "Walk of Punishment," the third episode of season three where Jaime loses his hand to save her honor. In the aftermath of the event, Jaime won't articulate why he chooses to help Brienne, but whines that he would rather die than go on living as a shadow of his former self. Brienne replies that this the first time Jaime has to face real world consequences he folds like a woman. Her strength and refusal to play into his pity bring him back from the brink of despair and the two form a bond that is echoed in the eighth season when Brienne steps up to vouch for Jaime upon his arrival at Winterfell.

Ser Brienne Tarth has earned her new title — one that rings well with the sword she carries, Oathkeeper — and the fact that Jaime Lannister is the one to bestow her with the recognition she so craves makes this moment all the more memorable.