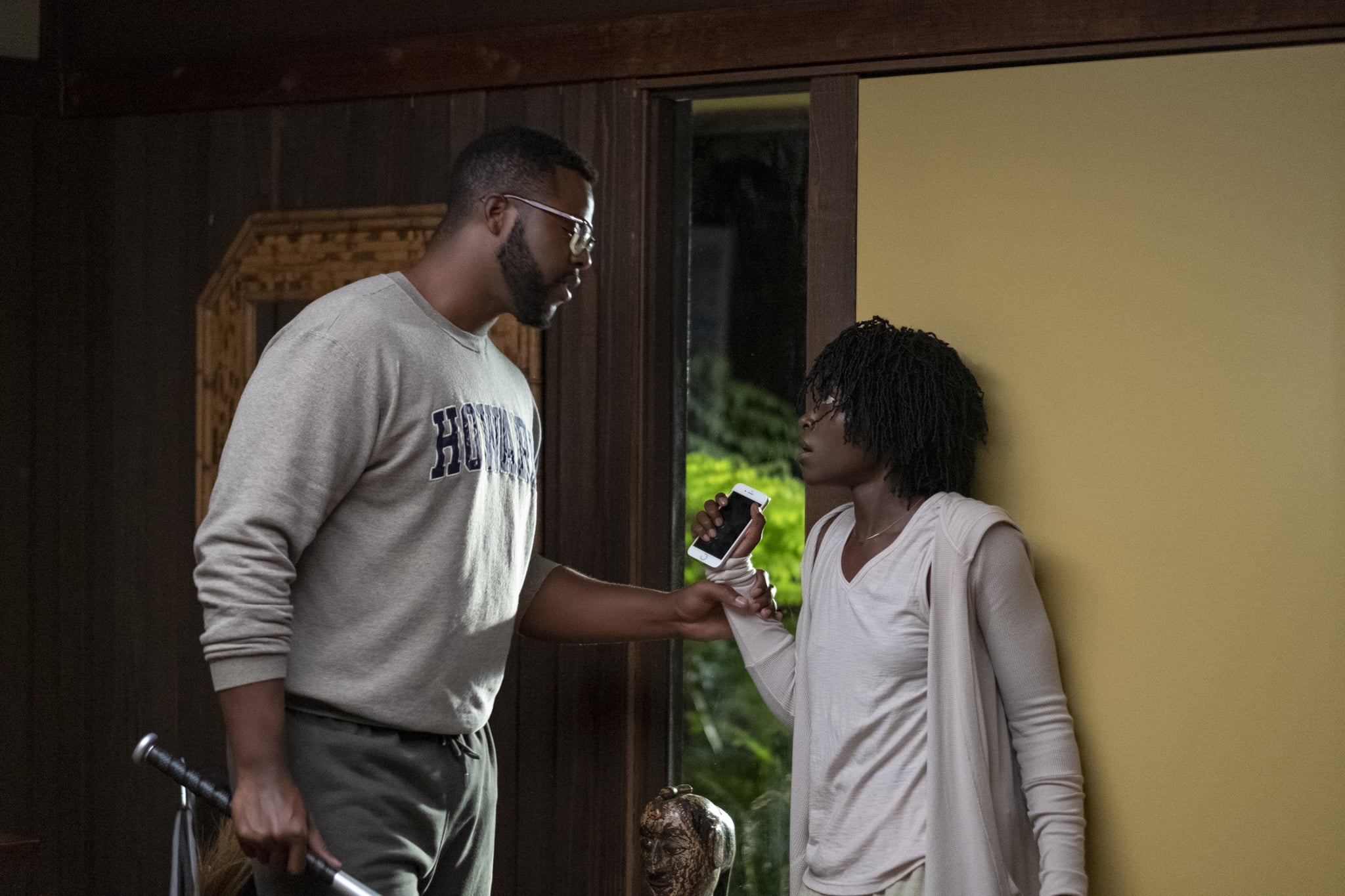 If you watched Us for the umpteenth time already, you aren't alone. Complex and heavily nuanced with social and political themes — right down to the names of the doppelgängers — Jordan Peele's horror movie is a tapestry of symbolism and satire we can't help but discuss over and over again. And horror movie it is, according to Peele himself. There are endless meanings we can glean from Us, but it's hard to deny its terrifying reflection of us.

Peele asks every one of us how we look at ourselves in the mirror, and then brings our own reflection to life so we can't do anything but look at ourselves. There's a reason why one of the taglines of the movie is "Watch yourself."

We've broken down the main themes we think Us aims to discuss, proving why it's such a prescient movie.

1. The Fractured Climate of the United States 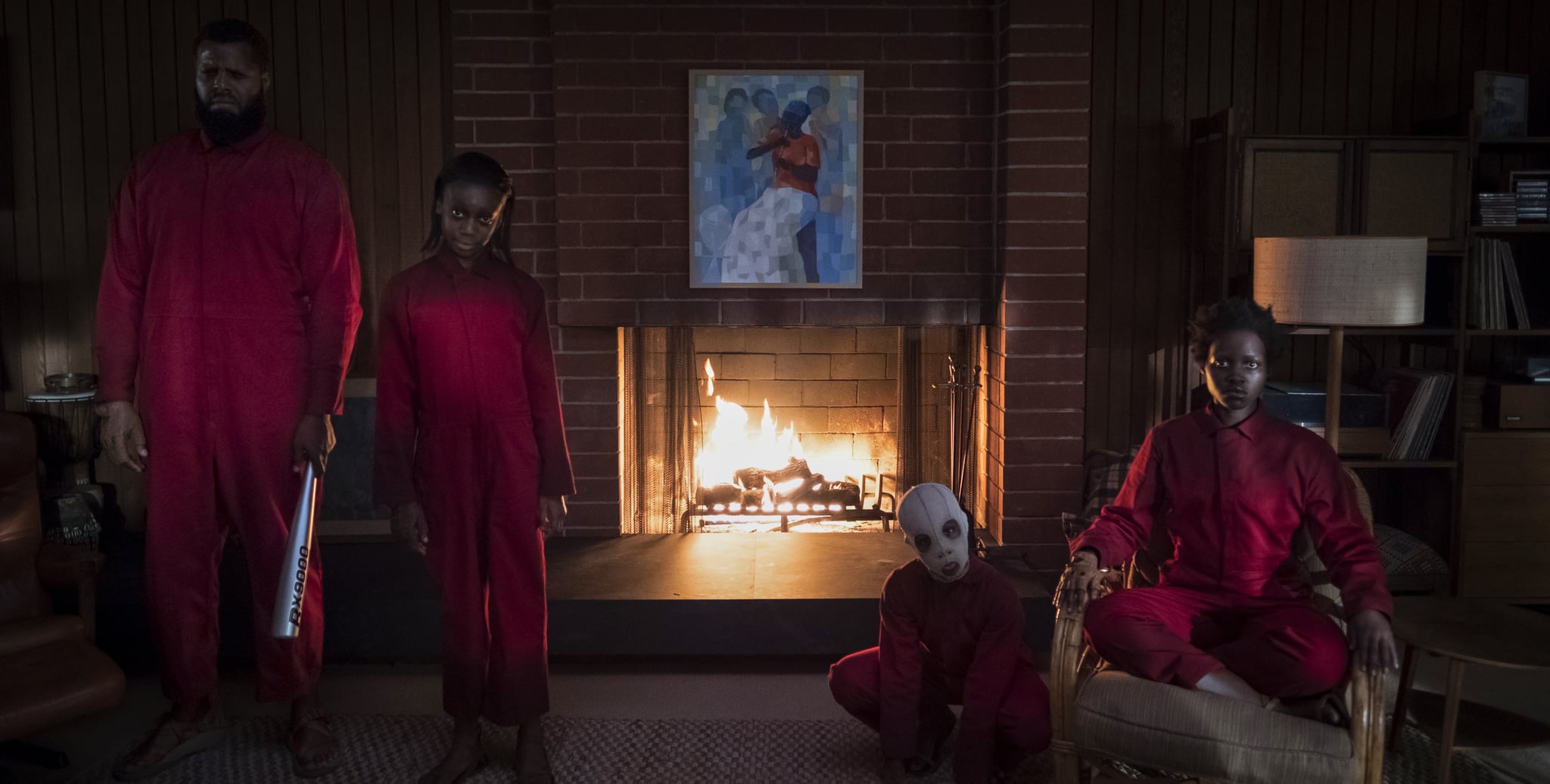 Us seems to offer a grim past, present, and future of the United States. Not only does the real Adelaide (Red) suggest the US government created doppelgängers (the Tethered) in an attempt to control society — a problematic concept on its own — but the members of the Tethered are ostracized from society to the point where they are kept and later abandoned underground. They are seen as "other," and Peele plays up their creepiness as a way to subvert the stereotypes.

In an interview with The Root, Peele said, "[W]hen I decided to write this movie, I was stricken with the fact that we are in a time where we fear the other, whether it is the mysterious invader that we think is going to come and kill us or take our jobs or the faction that we don't live near that voted a different way than us." When Red's family invades the Wilson home, Gabe asks them: "What are you people?" to which Red replies, "We're Americans." Red wants people to see the Tethered members of the same society as the "regular" people.

Ironically, in trying to prove they're Americans, the doppelgängers tether themselves to a piece of controversial American history in the form of 1986 charity event "Hands Across America." It included participants from all walks of life fighting against poverty, but ended up being somewhat of a fundraising failure. Peele told Vanity Fair: "It's a great gesture — but you can't actually cure hunger and all that." Is Peele suggesting that the event can't help the doppelgängers either? Perhaps. When the doppelgängers recreate this event, they are blindly reverting to a publicized event that boosted morale but wasn't effective; instead of fighting against nationwide poverty, they are fighting against their own oppression and homelessness on the surface — even if their execution is questionable.

Whether their uprising becomes a success unlike the real event is left open-ended, but the way the camera pans across the landscape at the end of the movie and shows the span of them holding hands in solidarity suggests a new, potentially dystopian future . . . or just history repeating itself. 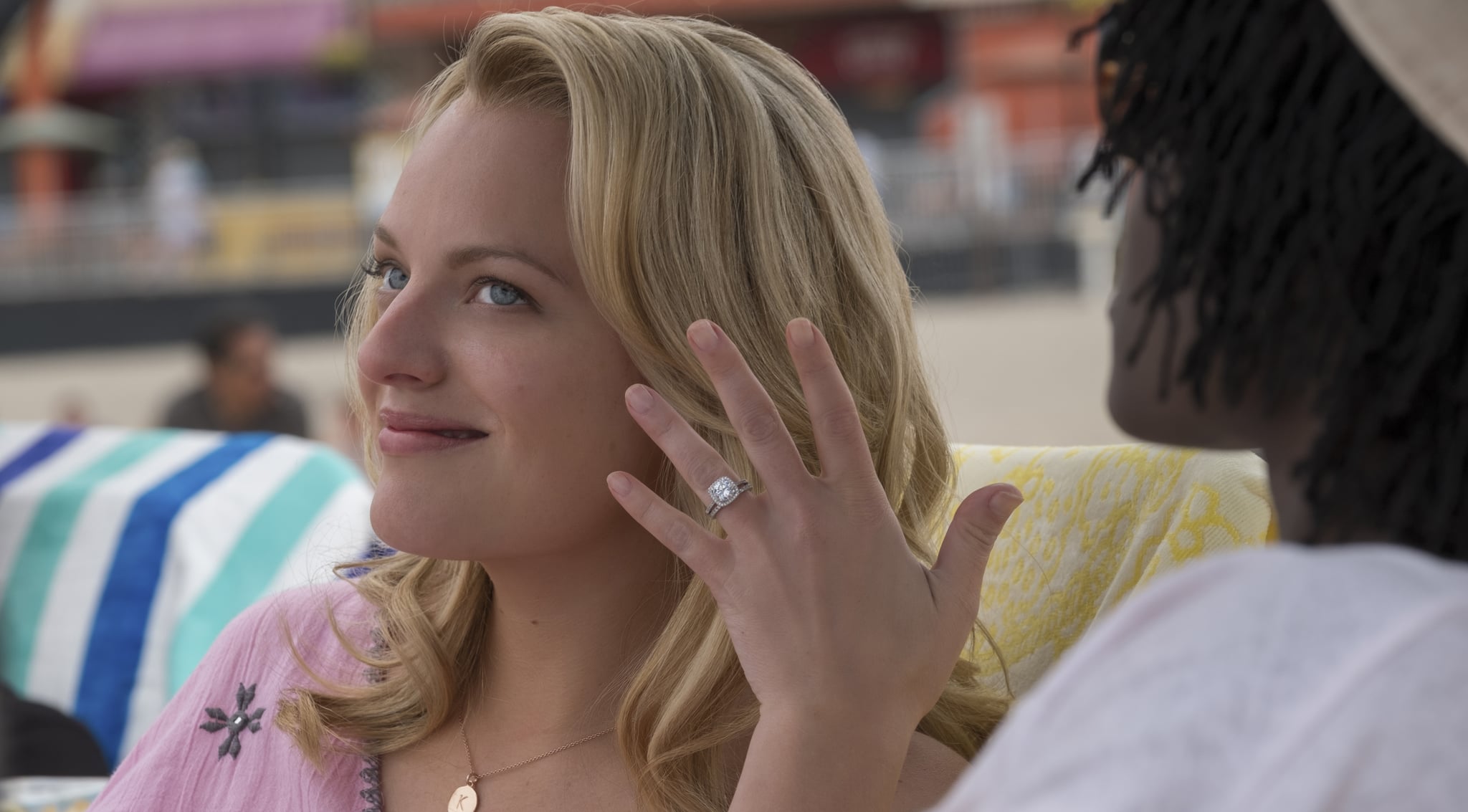 It's pretty obvious that there's a significant disparity in social class between the surface humans and their doppelgängers. The latter are literally below their counterparts in all facets of life, it seems, forced to suffer at the expenses of the privileged and wealthy. Adelaide ruthlessly climbs her way up the social ladder because the capitalistic institutions in place seem to prevent her or her fellow doppelgängers from achieving success any other way. Can we begrudge Adelaide any more than we can Red, who returns to take back what she feels is rightfully hers in an epic game of survival of the fittest?

Reddit user Rydizzle234 also argues that the movie is about social inequality: "The main message of the movie in my mind is expressed near the end of the film when one of the characters mentions something like 'We all look alike, with flesh and blood yet we live very different lives.' This illustrates the fact that we are all human and equal in our creation but disparity varies rapidly here in the US and worldwide between the classes."

What's even more painful to realize is that the surface humans — except for Adelaide — are not even aware of their existence until much later, which means they don't know just how good they have it. When the family walks across the beach, we see each of their shadows clear as day. While this shot can be taken to hint at what lies beneath them, it can also show just how oblivious we can be to our surroundings, even when it's right next to us.

"Gabe's pride over a boat to show off to his wealthy friend, Kitty Tyler's many facial enhancements, or Zora's addiction to her phone feel shallow and gratuitous when juxtaposed against the decrepit tunnels and the woes of their shadows."

In fact, Peele himself acknowledges how privilege is gained on the backs of the underprivileged. "We live in a country that is about every man is created equal, and [yet] it's built on the backs of genocide. It's built on bloody soil. In the very DNA of this country, there are great ideas, and there are the worst horrors that humans can create," he said to Vanity Fair. "So I feel like if I'm going to accept the privilege I have as a modern American with opportunity, I have to take on some of that guilt of the sins. The sins, the people who suffer and have suffered so I can have."

A particularly affecting scene is the flashback Adelaide has at the end, where we see a side-by-side of the activities of the people on the boardwalk and their doppelgängers forced to mimic their behaviors underneath them without knowing why and without any of the amenities of something as simple as a food court.

Fast forward to the present, and Gabe's pride over a boat to show off to his wealthy friend, Kitty Tyler's many facial enhancements, or Zora's addiction to her phone feel shallow and gratuitous when juxtaposed against the decrepit tunnels and the woes of their shadows. After all, technology only gets them so far. Not only are the Tylers immediately killed off in their lofty house, but when Kitty asks her Alexa-equivalent Ophelia to call the police, Ophelia instead plays the song, "F*ck Tha Police."

3. The Duality of Human Nature

Peele stresses that there's a monster inside each of us, and he uses that as a launching pad for the movie. By juxtaposing the surface humans against their doppelgängers, Peele drives home the argument that we can be our own worst enemy. While speaking to NPR, he said, "Now, throughout history the doppelgänger mythology exists. And what I think it represents is this — is everything that we don't face in ourselves. It is a representation of the guilt, the trauma, the fear, the hatred that might be buried underneath layers of pleasantry. All that stuff that we don't deal with: When it comes out, it'll come out in crazy ways."

In examining the duality of humans, Peele calls for a reckoning of human and societal behavior while at the same time upending the definitions of a good and bad person. Once the Wilson family begins killing their counterparts, they stop being afraid and hesitating. Zora and Adelaide in particular take great pleasure in killing the Tylers' doppelgängers. As they make their escape, the family even goes as far as turning the killings into some kind of competition and figuring out who killed the most. They are by no means the "villains" here, but facing their counterparts brings out their inner darkness.

Adelaide may have scammed Red out of a privileged life, but her track record shows she is not a bad person per se. This puts viewers in the difficult position of determining whether or her actions are just and she is simply a victim of her circumstances. Having the two physical Adelaides pitted against each other at the center of the movie personifies this introspection; they're both doing what they can and slowly resorting to their baser instincts to win and survive even as they stand as reminders of the other's wrongdoings. Killing Red doesn't expunge Adelaide's crimes, but it reminds her and us that they're intrinsically not all that different.

4. A Foreshadowing of Judgment Day 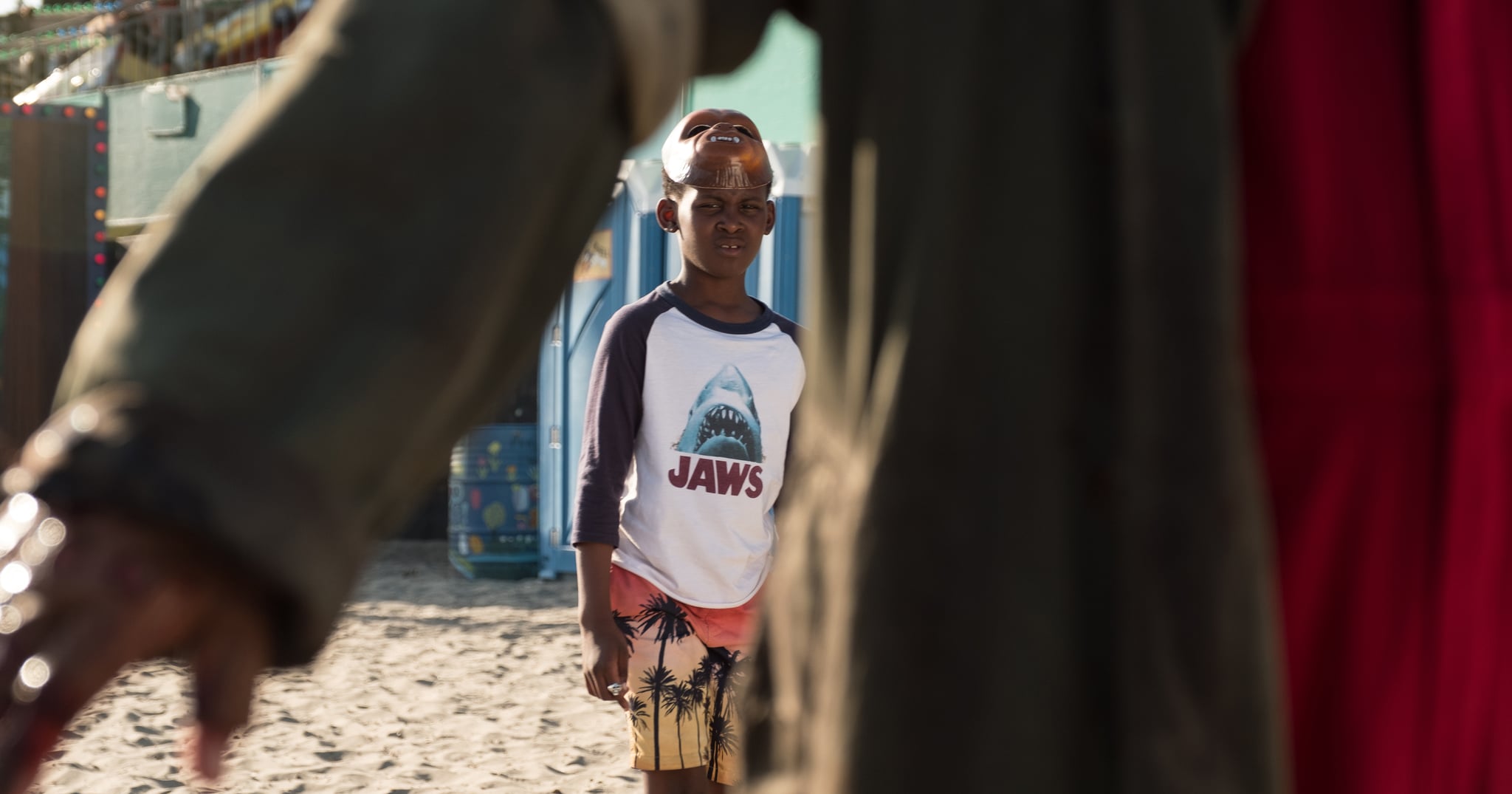 A young Adelaide first sees a man holding a Jeremiah 11:11 sign on the Santa Cruz boardwalk in 1986, not realizing that it's meant to be a warning about the Tethered. The actual Bible verse says, "Therefore thus saith the Lord, Behold, I will bring evil upon them, which they shall not be able to escape; and though they shall cry unto me, I will not hearken unto them." There are several interpretations to what this could mean; a Reddit user posits two of them: "The evil are the tethered, who are coming for mankind, unable to escape. OR the evil is the pointless suffering the tethered have to endure for the sake of humanity."

While Red believes the Tethered are being tested by God, it's clear that surface humans don't have strong faith in God, becoming less and less tethered to their faith and more tethered to their materials goods. The glimpses we get of a post-apocalyptic world feels like the onset of Judgment Day.