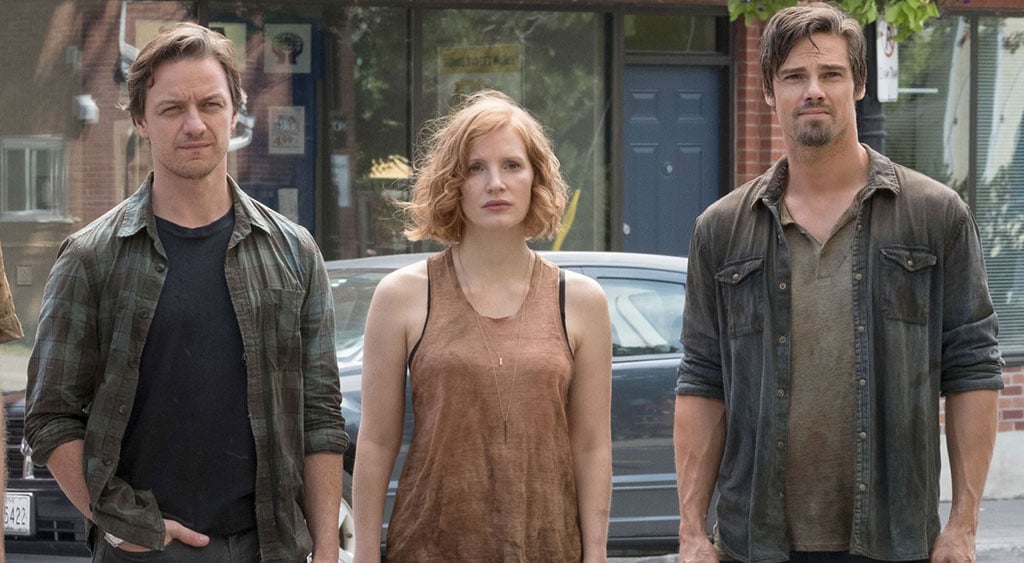 Just like the Derry sewers are full of killer clowns, this article is full of It Chapter Two spoilers — beware of what's ahead!

The average audience member heading into It Chapter Two likely isn't expecting romance. After all, a movie about a demonic child-eating clown isn't exactly an aphrodisiac, right? Against all odds, though, director Andy Muschietti manages to squeeze in a few romantic moments between the members of the Losers Club. Not only are Richie's unrequited feelings for pal Eddie explored more explicitly than they are in Stephen King's original novel, but we also get a satisfying conclusion to the love triangle between Beverly, Bill, and Ben.

When we first check in with the now-adult characters, 27 years after the events of the first film, Beverly (Jessica Chastain) has grown up to become a successful fashion designer. She's also married the co-owner of her business, who happens to be just as violent and abusive as her father. The trip to Derry, though obviously traumatic in many ways, does give Beverly a fresh start — she finds the strength to leave her husband and move on romantically. But with who?

At first sparks fly between her and Bill (James McAvoy), who's grown up to be a famous horror novelist married to an actress, Audra (Jess Weixler). It's to be expected, considering they kissed as kids and simply the act of kissing once more helps them regain some of the memories they'd lost being away from Derry for over two decades. However, Bill isn't the only one who's aged like fine wine — Ben, played originally by Jeremy Ray Taylor, has grown into a hunky, wildly in-demand architect (Fighting Season heartthrob Jay Ryan). Oh, and he hasn't let go of his crush on Bev all these years, still keeping the folded page of her yearbook entry in his wallet into adulthood. (Hold please while I just *swoon*.)

Related:
Let's Discuss Richie's "Secret" in It Chapter Two For a Sec

Like in King's novel, when Beverly eventually discovers that it wasn't Bill who wrote her the poem all those years ago — "Your hair is Winter fire / January embers / My heart burns there, too" — she suddenly sees Ben in a whole new light. They become even closer when the final showdown with Pennywise in the sewers under Derry leaves the two of them fighting for their lives against the clown's hallucinations, eventually coming back to reality only through their intense bond and love for each other.

Despite kissing Bill and reliving her childhood, Bev ends the sequel fully realizing her feelings for Ben. They share a passionate underwater kiss in the Derry quarry, and a flash-forward reveals they leave the town as a couple — their last scene is them watching the sunset on a yacht, clearly very much in love.