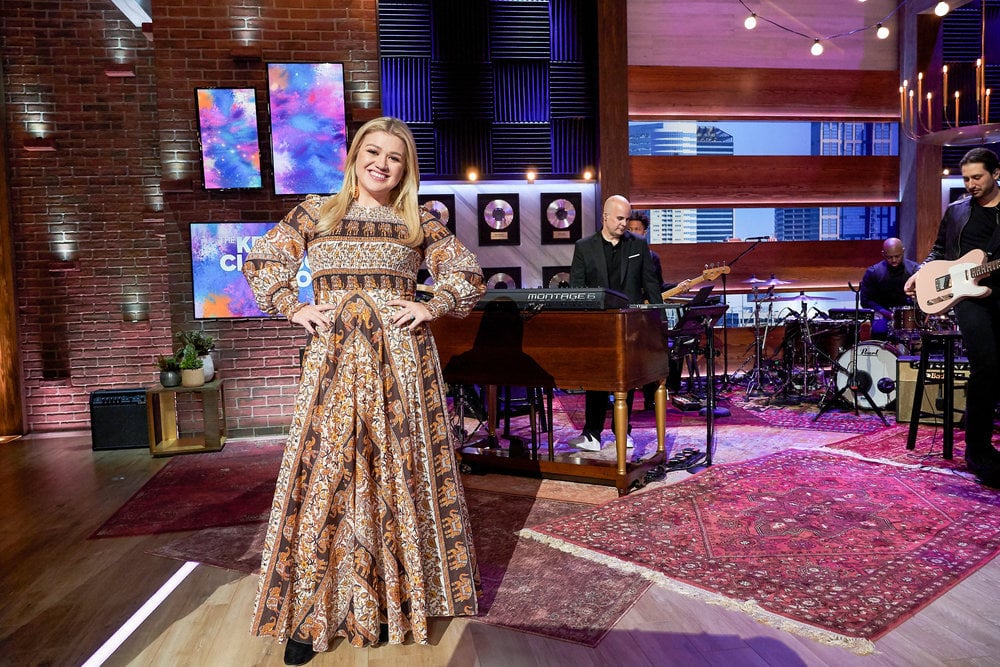 Kelly Clarkson amazes us every time she covers hit songs on The Kelly Clarkson Show. Between crooning Sia's "Chandelier" and Post Malone's "Better Now," no genre is off limits for the illustrious American Idol winner. So how does the 37-year-old star choose which tunes to perform? "There are lists that are sent in and submitted from fans. So far, every request has been really cool. [My team] also makes lists," Clarkson told POPSUGAR over the phone on Nov. 12. "If people say, 'We want you to cover this,' and I've already done the song, we might pick a different song from the same artist." Although all of her performances are top-notch, Clarkson cited her covers of Lizzo's "Juice" and Heart's "Alone" as two of her favorite "Kellyoke" moments.

Tackling other legendary singers is a bit daunting, even for her. Prime example: when she sang "I Wanna Dance With Somebody" by Whitney Houston. Clarkson admitted that performing a classic hit by such an icon was nerve-racking. "I was like, 'Why the hell am I covering Whitney Houston? Oh, my god.' It's just hard to cover her because it's like no one's going to win." (For what it's worth, we thought she rocked the performance.)

In addition to the show's musicality, Clarkson has enjoyed expanding her platform. It's even opened doors for other opportunities, including a collaboration with Norwegian Cruise Line, which just named her the godmother of its newest ship, Norwegian Encore. Through the partnership, Clarkson will get to vacation on the craft with her family — husband Brandon Blackstock and children River Rose, 5, and Remington, 3 — as well as send fans on getaways. "It's just really cool that we get to help people who maybe couldn't afford to go on trips with their family," she said.

"My show is what it is, and I am who I am. Some people will dig it, some people won't, and that's cool."

More than anything, Clarkson has been able to have fun doing what she loves. She's interviewed some of her favorite stars, such as Garth Brooks, and hopes to continue chatting with other figures who have inspired her. "Meryl Streep, Robert De Niro, Denzel Washington, or Tom Hanks — any of those people that I grew up watching and still watch," she said, listing a few of her dream guests. "They're all rad." And despite her initial fears of hosting a talk show ("I love talking so much and thought I might not shut up," she noted), Clarkson has found her footing in the small-screen sphere. "My show is what it is, and I am who I am," she said. "Some people will dig it, some people won't, and that's cool."

As if hosting a talk show and being a godmother to a cruise ship isn't admirable enough, the songstress also has her Las Vegas residency, Kelly Clarkson: Invincible, coming up. The 16-show event, named after her 2015 hit, will start on April 1, 2020, and run through September 2020. "I love the song, 'Invincible,'" Clarkson said. "Invincible is the name [of the residency] because we wanted something that felt strong and had a lot of meaning — a classic name that could last."

Hopefully by the time her residency rolls around, she will have dropped her new single that's in the works. She didn't offer an official release date, but she did tease a little bit about the song's special meaning. "I haven't had enough time to do a full album, but this song is so powerful. It's one of my favorite songs I've ever been the vessel for," she said. "I love the songwriter, I love the message. It's all-encompassing and really magical. It's about inclusivity, connecting with people, taking that higher road, and being the best version of yourself."

Netflix
The "Freeridge" Cast Say "On My Block" Fans Won't Be Disappointed: "It's Honestly the Same"
by Noelle Devoe 26 minutes ago

Jane Fonda
Jane Fonda Reflects on Her Past Eating Disorder: "It's a Very Lonely Thing"
by Chandler Plante 23 hours ago

by Emily Weaver 56 minutes ago