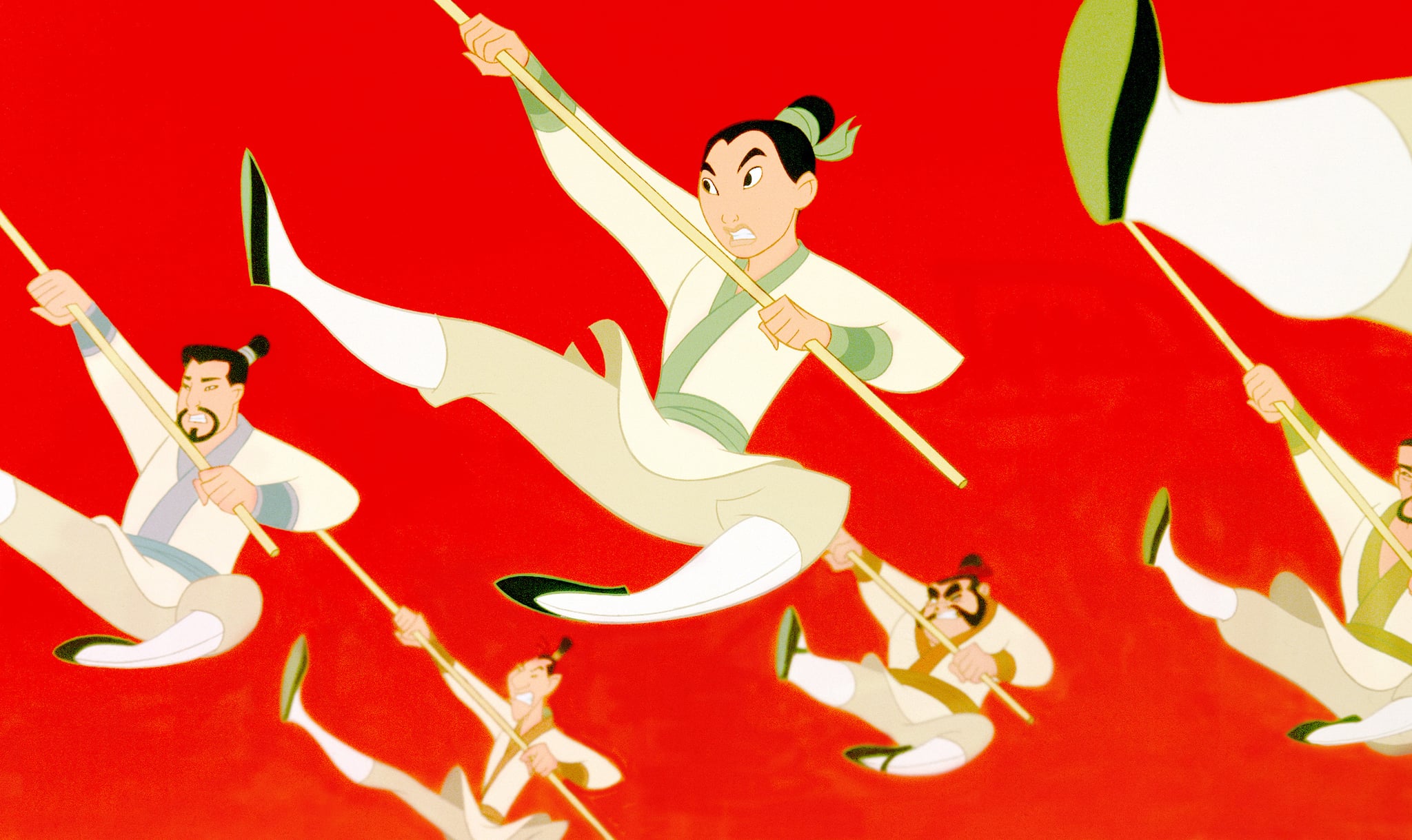 Rarely does a week go by where I don't catch myself belting a verse from "I'll Make a Man Out of You" in the shower. Over two decades since Disney's original Mulan film was released, I still remember every word, every inflection, and even which character regrets cutting gym class.

The soundtrack to the 1998 classic has stuck with an entire generation for over 20 years. But "I'll Make a Man Out of You" is the true Mulan theme song, and it has to do with more than just the fact that it's so catchy (which it definitely is). For starters, unlike many Disney classics, it's not a ballad. Don't get me wrong — I'm a sucker for a good tearjerker like "Beauty and the Beast" or "I See the Light" from Tangled. But there are certain times when I just want to have a full-on Disney sing-along while I'm cooking dinner or having a dance party in the living room, and this song makes it onto the list every time.

This motivational scene signifies Mulan's personal growth and transition into a warrior.

Light, upbeat, and inspiring, "I'll Make a Man Out of You" isn't just my motivation to burst into song once in a while. It's also the song that plays over Mulan's training sequence. A pivotal moment in the film, the montage shows Mulan as she struggles to keep up with Li Shang and the rest of the squadron while they prepare themselves for battle. "Tranquil as a forest but on fire within / Once you find your center, you are sure to win," Li Shang sings as Mulan attempts (and fails) to balance a bucket of water on her head and balance her core.

Just a few verses later, he deems her unworthy of being part of the fleet and insists that she go home. "You're unsuited for the rage of war / So pack up, go home, you're through / How could I make a man out of you?" he adds. It's at this point that Mulan could have gone home, reunited with her family, and avoided the war altogether. But her strong-willed nature and perseverance push her to stay, and she proves her worth by climbing to the top of the pole with the weights — "discipline" and "strength" — tied to her arms. She pushes herself to try harder than before and proves that she can — quite literally — pull her weight as well as anyone else. This motivational scene signifies Mulan's personal growth and transition into a warrior, but the moment is made even more powerful by the song lyrics playing as she stumbles with her buckets of water and practices that impressive flying kick.

On top of the empowering message within the lyrics, there's also irony in the fact that the hook of the song is "Be a man." The only reason Mulan was afraid to replace her father in the war is because she's a woman, and throughout the song, the lyrics emphasize that traits like "swiftness," "forcefulness," and "strength" are seen as masculine. So, on the surface, Mulan truly becomes "a man" in the eyes of her fellow squadron members by completing her training and living up to the message of the song. As a viewer who knows Mulan's secret, the song signifies that she is just as strong and capable as the rest of her team.

In addition to undergoing warrior training, Mulan knows that the penalty for being discovered as a woman would be death, yet she remains to fight for her father and for her family's honor, making her even stronger than anyone knows. Ultimately, the song pokes fun at the idea that to be strong is to be "manly" and calls attention to the fact that Mulan is more badass than anyone around.

At the end of the day, "I'll Make a Man Out of You" is the first song that comes to mind when I think of Mulan, and — unlike other earworms — it's always a pleasant surprise when it gets stuck in my head unexpectedly. The song is a celebration of Mulan's courage and strength, and captures all the key aspects of the movie in its humor, message, and timing. Now, please excuse me while I go give this song a listen for the 400th time, and relive the glorious Mulan scene for yourself here.

Nostalgia
Phat Tuesdays: Look Back at the Black Comedy Renaissance of the '90s
by Chanel Vargas 3 days ago