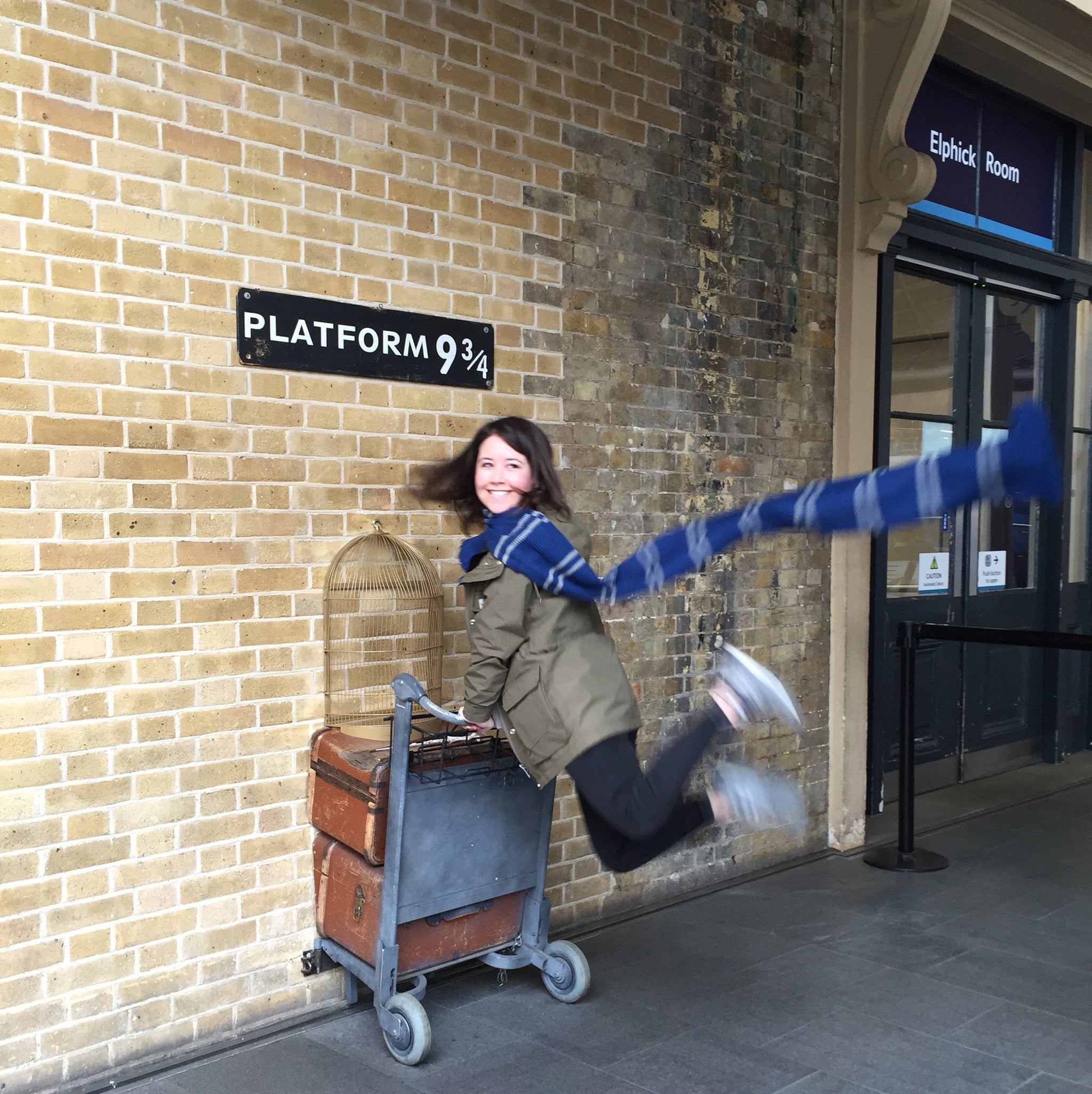 I'm one of those Harry Potter fans. You know, the kind who includes their Hogwarts house in their bio, has a Harry Potter quote for every situation, and has made their obsession permanent with a tattooed ode to the fandom. I've even traveled to filming locations all over the UK (and took "flying lessons" at Alnwick Castle, which was both mortifying and hilarious). So when JK Rowling made transphobic comments this summer, to the point that it's clear this is the hill she (and, potentially, her career) is going to die on, I felt deep disappointment in the author and shame around a fandom I used to be proud to be a part of.

In the following months, I couldn't bring myself to write about it or really even talk about it. Firstly, as much as Rowling's hateful comments upset me, I couldn't even imagine what it felt like for Harry Potter fans in the trans community. So many LGBTQ+ fans have found acceptance and support from fellow Potterheads, a community which, in my experience, welcomes people of all kinds into its fold. That was the true betrayal, and it isn't my story to tell. Secondly, I simply didn't know what I was supposed to do with this information as a Harry Potter fan. I felt frozen, in limbo, like I couldn't say anything until I knew the correct response.

Is it possible to love the art while disagreeing, fundamentally, with the artist?

I didn't know then, and I don't know now.

Two of the biggest Harry Potter fan sites, MuggleNet and The Leaky Cauldron, released similar statements against Rowling's comments and have committed to fostering inclusivity, backing it up with a new set of policies that center their content on the fandom instead of the author. In many ways, it's business as usual, as they celebrate the series separate from Rowling, sharing fan art, memes, and news related to the stars of the movies and play (many of whom have showed their support for the trans community).

So while some decisions may seem black and white on the surface, simply a set of guidelines to follow, personally, the waters get murkier, and the emotional stakes are high.

I'll admit, as a Harry Potter fan, I'm struggling. For myself, and for many others, turning to a favorite nostalgic book or movie you know by heart is a safe space, a way to find comfort and joy in the face of uncertainty. It's a way to spend time with old friends when you're lonely. And this year? This is a dementor-sucking-the-joy-out-of-you doozy of a year. We need comfort. We need friends, even if they're found in the pages of a book.

When I think about what I love about Harry Potter, I don't actually think of the author. I think of the funny, smart, quirky, kind, thoughtful, and welcoming friends I've made over the years who are a part of this fan community.

The thing is, when I think about what I love about Harry Potter, I don't actually think of the author. I think of the funny, smart, quirky, kind, thoughtful, and welcoming friends I've made over the years who are a part of this fan community. The ones who are unashamed to be themselves, even if that means dressing in elaborate wizard robes and pointy hats well into adulthood. The ones who unironically enjoy the silly things in life. The ones who fight for causes they believe in and strive to make the world a better place. I think of beloved characters who inspire and delight, bringing tears and laughter again and again. I think of immersive stories that bring escape when the weight of the world feels overwhelming. I think of the sense of belonging you feel when you spot a fan out in the wild, how you can bond with a complete stranger over Hufflepuff socks or a Deathly Hallows tattoo.

So, fellow Harry Potter fans, I don't know. If this was the plot of a novel, I'd be stuck somewhere in the middle, with more questions than answers, turning page after page in hopes that a tidy resolution is just a few chapters away. But life isn't a book, and there isn't always a tidy resolution. Instead, I'll leave you with this. Whatever Harry Potter means to you is yours and yours alone, and no one can take that away from you.

As "the boy who lives" himself, Daniel Radcliffe, wrote in his essay on The Trevor Project:

"If these books taught you that love is the strongest force in the universe, capable of overcoming anything; if they taught you that strength is found in diversity, and that dogmatic ideas of pureness lead to the oppression of vulnerable groups; if you believe that a particular character is trans, nonbinary, or gender fluid, or that they are gay or bisexual; if you found anything in these stories that resonated with you and helped you at any time in your life — then that is between you and the book that you read, and it is sacred. And in my opinion nobody can touch that."

If you're still deciding what you want to do with your fandom, why not use your powers for good? Donate or volunteer your time to support the Black trans community, help get out the vote this election season, and use your voice to elevate others instead of bringing them down.

Related:
These Parents Had a Gender Reveal For Their Transgender Daughter, and the Photos Are Stunning
Image Source: POPSUGAR Photography / Tara Block
Harry PotterBooksPersonal EssayJ.K. RowlingMoviesLGBTQ+Transgender

Books
Jennette McCurdy Details Abuse by Her Mother, Her Difficult Nickelodeon Experience in Memoir
by Lindsay Kimble 15 hours ago