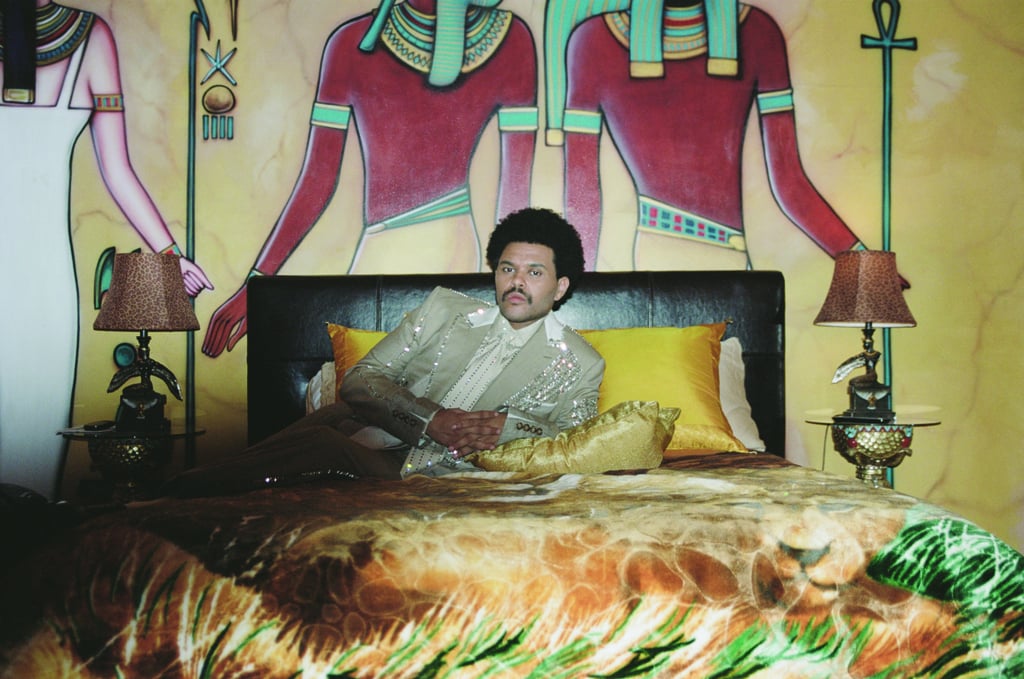 The Weeknd is getting ready to drop his After Hours album, and ahead of its March 20 release, the 30-year-old is the cover star of Carine Roitfeld's CR Men March issue. In the photo spread, The Weeknd dons several retro ensembles as he channels his muse, Sammy Davis Jr., and yes, he's still sporting that mustache. Even though The Weeknd rarely does interviews, he did make an exception this time around to talk about his music and upcoming album.

The Weeknd (whose real name is Abel Makkonen Tesfaye) got his big break in 2011 when Drake featured a bunch of his songs on his Take Care album, which The Weeknd had originally written for House of Balloons. Four years later, he managed to become one of music's hottest stars with Beauty Behind the Madness debuting at No. 1 on the Billboard charts. When reflecting on his first-ever performance, The Weeknd recalled the euphoria he felt when he was on stage. "All those screaming fans were there to see me and I was overwhelmed," he said. "I was terrified, nervous, anxious, and then when I sang the first note I felt euphoria. I was comfortable. I knew I was gonna do this for the rest of my life but I'll never be able to duplicate that feeling."

"I never made My Dear Melancholy with the intent on saying f*ck you to anybody."

It's been almost four years since The Weeknd's last album, Starboy, though he did release a six-track EP titled My Dear Melancholy in 2018. While many assumed the majority of the songs were aimed at his ex Selena Gomez, The Weeknd explained that the lyrics weren't meant to be a diss. "I never made My Dear Melancholy with the intent on saying f*ck you to anybody," he said. "It was just how I felt at the time. The sonic environment felt fitting for how I wanted to tell that story. I feel like I have sonic ADD and I can't just stick to one sound and I feel like it irritates a lot of listeners but it's just how my mind work."

For his After Hours album, however, The Weeknd plans on revealing a different side of himself. "I feel confident with where I'm taking this [new] record," he said. "There's also a very committed vision and character being portrayed and I get to explore a different side of me that my fans have never seen." "Heartless" was the first single from the album, and it was actually the first song The Weeknd wrote after My Dear Melancholy. "It felt fitting for me to put it out," he explained. "I play a character in the video who becomes compromised and then overcompensates with all the sins that Vegas provides. It's a great introduction to the next chapter of my life."

Check out The Weeknd's full interview on crfashionbook.com and on newsstands on March 12.

Related:
The Weeknd Announces His After Hours Tour, and Welp, There Goes My Paycheck
Previous Next Start Slideshow
The WeekndMusicCelebrity InterviewsCelebrity QuotesMagazine Covers