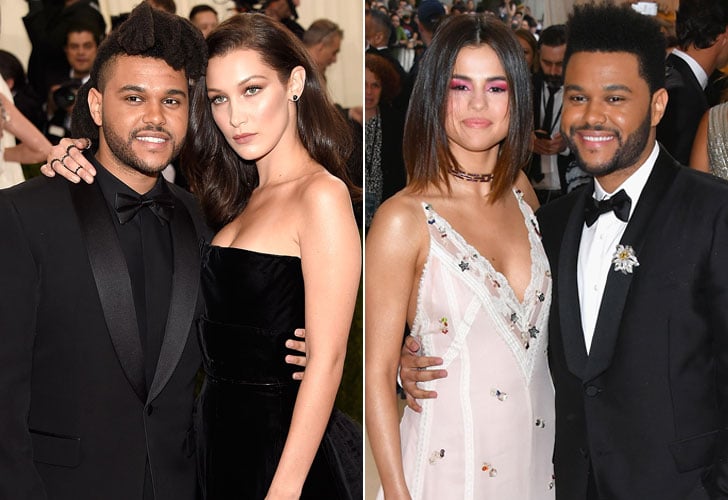 Did The Weeknd take a page out of Taylor Swift's book when writing the songs for his new EP, My Dear Melancholy? It certainly seems like it. The Canadian singer, née Abel Tesfaye, debuted six new songs on Thursday night, and many of them have pretty big nods to ex-girlfriends Selena Gomez and Bella Hadid. While it seems like he could potentially be trying to win back the supermodel, the lyrics about Gomez range from mournful to straight-up scathing given how their relationship ended (she started dating ex Justin Bieber almost immediately). Overall My Dear Melancholy is a dark, beautiful addition to The Weeknd's discography, but if you're interested in decoding who, exactly, his songs are about, join us as we go through the album, line by line.

Related:
The Way They Were: A Day-by-Day Look Back of Selena and The Weeknd's Whirlwind Romance

"Call Out My Name"

Oh boy. The first song on My Dear Melancholy goes straight for the jugular. Gomez's jugular, to be specific. The line about helping someone "out of a broken place" sure seems like a reference to her ongoing health and mental health struggles, as well as her recovery from a kidney transplant surgery. It could also be interpreted as a nod to her roller-coaster romance with ex-boyfriend Bieber. The real kicker comes when The Weeknd makes it clear that whoever he's singing about was a "mistake." Harsh.

Kissing scars? That has to be a nod to Gomez's kidney transplant surgery, which left her with a literal scar on her leg. As for lyrics like "You're the best I ever had" and "It might have been, been about a couple months," both check out when it comes to his relationship with Hadid (he was photographed leaving her apartment in November 2017, FYI). We'll probably never know what was in that picture she texted to him, unfortunately.

"I Was Never There"

Gomez's unstable on-again, off-again relationship with Bieber has been highly publicized for years, and labeling it "toxic" definitely wouldn't be out of place. The lyric "I know it ain't you for sure" hints that The Weeknd learned something from their relationship, at least.

Related:
The Weeknd Is Totally Trying to Win Bella Hadid Back With These New Songs, Right?

Since her split from Bieber, Gomez has been linked to musicians like Charlie Puth, Zedd, and obviously The Weeknd. There's nothing wrong with dating multiple guys (we can't even be sure which of those relationships were legit, other than her courtship with The Weeknd), but that's likely what the singer means with the lyric "You try to fill the void with every man you meet." As for the second line, it almost sounds like Gomez has reached out to her former beau since moving on — and then breaking up — with Bieber.

"Wasted Times" is the one track on My Dear Melancholy that most explicitly references Hadid. It starts by taking another shot at Gomez ("She wasn't even half of you," oof), and then goes on to wonder if Hadid is single (the 21-year-old model has been notoriously tight-lipped about her private life since their breakup in 2016). The most obvious reference to her, however? It's gotta be "You were equestrian, so ride it like a champion." Not only has Hadid ridden horses for years, but her passion for horseback riding was so intense that she even considered competing in the Olympics at one point.

"I held you down when you were suffering" could be another reference to the way he helped Gomez through some trying times over the course of their relationship. As for "They said our love is just a game," we're guessing it's meant to put the people who speculated that they were only dating for the publicity on blast.

If you want to try your hand at uncovering all of The Weeknd's lyrical shout-outs in My Dear Melancholy, listen to the full EP below.