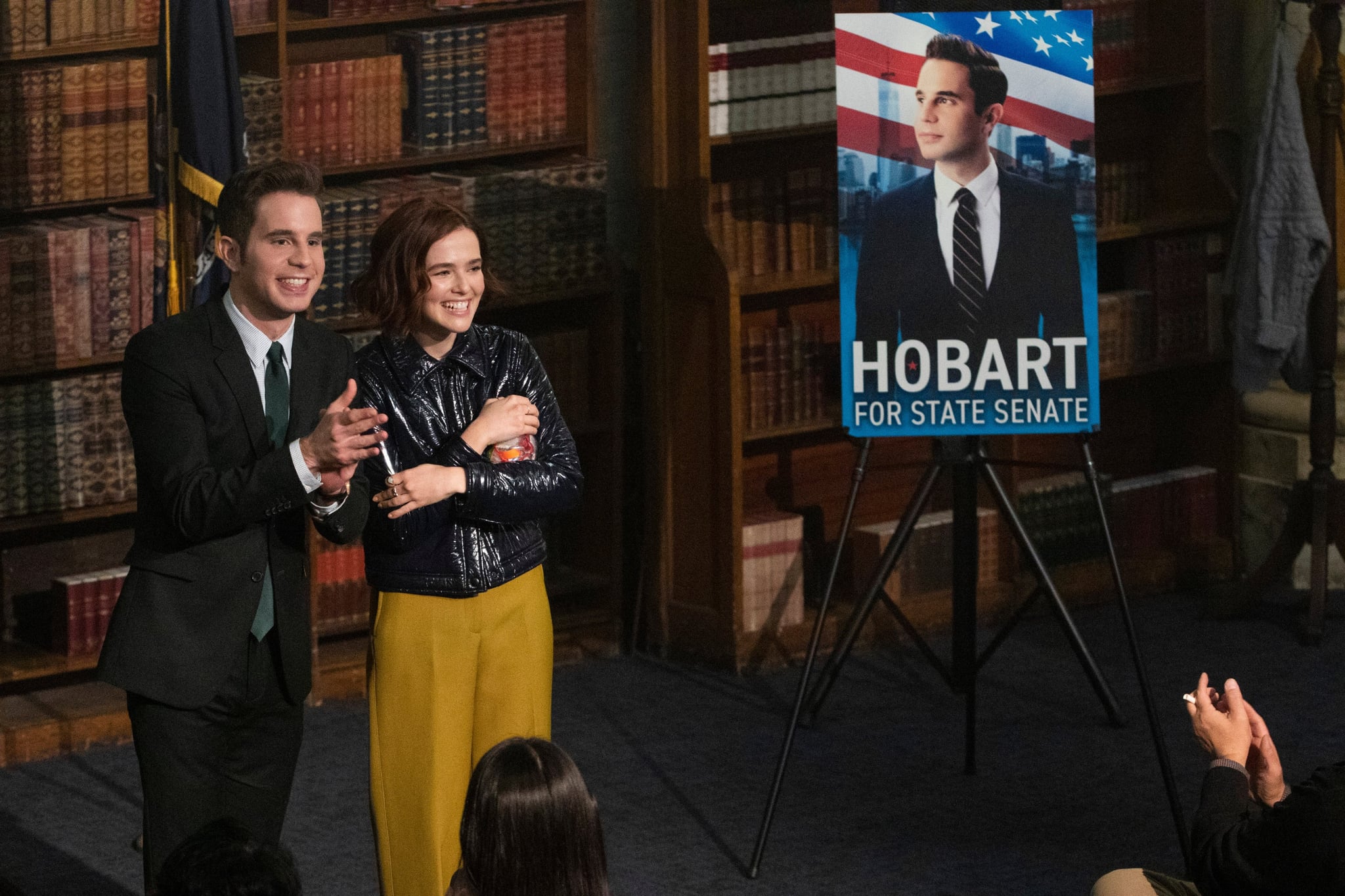 In season two of Netflix's The Politician, Payton Hobart (Ben Platt) takes on a new election, this time for New York State Senate. Payton, who is obsessed with campaigns and being in office, goes up against incumbent Dede Standish (Judith Light) who has been in office for over 30 years. He builds his campaign on the very real threat of climate change and saving the planet. The hyperrelevant show demonstrates what happens when a politician taps into what the next generation wants to see in a leader and how to go after their vote, something that real-life politicians, namely presidential ones, in the real world still struggle with.

Dede, the incumbent in the senate race, appears out of touch with young voters in the show and seemingly wants to remain in office simply because she's been there for so long. And though Payton almost seems to care more about taking office than anything, he soon realizes that the causes he built his platform on are actually important for the longevity of the world, quite literally. He taps into the youth vote and helps people all over New York City register to vote for the first time ever, bringing the race tighter than either candidate imagined. In the end, both Dede and Payton acknowledged that if it weren't for the youth vote and connecting with what this generation cares about, the election would most certainly have gone a different direction.

Millennials and Gen Z — and the next generations to come — have a real chance at making a difference in these elections and in the world. The first step is to vote and make our voices heard.

The youth vote in the real world remains a hot topic among the biggest elections in the United States. In the 2016 presidential election, where millennials were considered the youth vote, they remained the lowest voting generation, a fact that failed to line up with what they claim to care about. Though millennials have been vocal about activism, equality, and blatant kindness — and while the younger generations seem to lean toward a liberal stance — not enough turned out to vote for a presidential candidate who could have made a difference in those areas. Part of the issue here is that Democratic candidate Bernie Sanders was hugely popular with the younger voters in 2016, but when he failed to win the nomination, too many of his supporters didn't vote blue in the general election. Whether that was out of anger for their favored candidate not being nominated or thinking Trump would be more help for the young working class is up to them, but it ended in Trump winning the general election and turning this country into the butt of the rest of the world's jokes.

But what's even more unfortunate is that Gen Z is struggling with turning up to vote, too. This generation, which is big into activism and is first in line to share their voices on the matters they care about, didn't turn out to vote for the presidential primaries as expected this year. That being said, primaries tend to have a low voter turnout compared to general elections, especially considering some states don't allow voters to take part in a primary if they aren't registered with a party that has a primary. Once again this presidential election cycle, Sanders was the favorite among younger voters, but when the youth vote he was counting on didn't come through, he ended up ceding the race, giving Joe Biden the nomination. We're now exactly where we were in 2016.

An interesting factor of the youth vote, though, as pointed out in this Atlantic opinion piece, is that it's not so much that the younger voters are fully failing to turn up to vote, but similarly to how people of color have a lower voting turnout because of systemic racism in the election process, youth are often excluded as well. The piece points out that registering to vote can be a confusing process for a new voter, and re-registering to vote when you move — something millennials and Gen Z do far more often than the older generations — is a cumbersome and confusing process, and one that some young voters don't bother to do. So then it becomes the problem that the youth vote is just not voting at all.

The Politician showed us how important it is to engage young voters and make sure they know that casting a vote is the first step to making a change, especially when there's a candidate who can make a real difference. But what The Politician also acknowledges is how powerful the younger generations can be and how much millennials and Gen Z cares. For many, it comes down to caring so deeply about the future but not seeing any person in government who can truly come through. In this season of The Politician, Payton is one of them. If anyone is going to understand how this generation feels and know how to fight for them, it's someone who is right there with them.

Younger voters predominantly favor the most radical candidates, according to The Atlantic, and when there isn't a candidate they feel strongly about, they sometimes don't bother to vote, which is the biggest thing we need to keep in mind when the 2020 election comes and every single election after that. Leading protests and fighting for change any way you can will absolutely make a difference, but so will voting for an elected official who will help. Millennials and Gen Z — and the next generations to come — have a real chance at making a difference in these elections and in the world. The first step is to vote and make our voices heard.